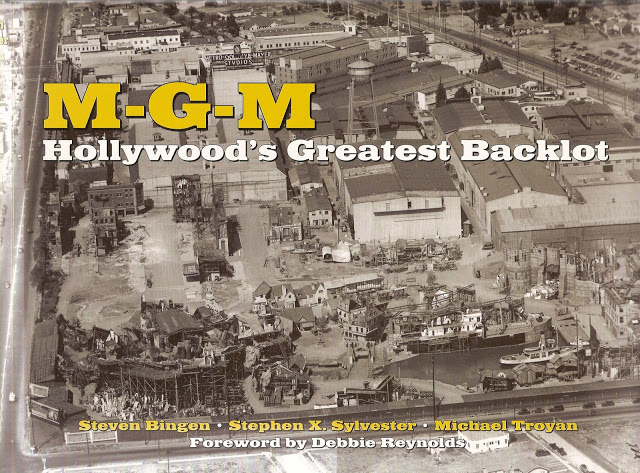 Hollywood backlots are endlessly fascinating, aren’t they? When I moved to Long Beach in 1977 I drove up to Burbank one day to check out the Walt Disney Studios on Buena Vista Street. I parked on residential South Lincoln Street behind the studio. Peeking through a knothole in the studio fence, I could just catch a glimpse of what I’m sure were the old sets for the Zorro TV series. I was never able to prove it, though, and I guess I never will now: the Disney backlot is gone — and for all I know, the fence, that section of Lincoln St., and the houses that faced it — subsumed into the Walt Disney Feature Animation building that went up in the 1990s.

In 1986 I attended a screening of Wisdom (in which I had a bit role) at the 20th Century Fox studios, and afterwards took a stroll around the grounds (that’s when I learned that once you manage to get inside a studio’s gates, people let you go more or less where you please, on the assumption that you must belong there). I saw the picturesque little Swiss-looking bungalow that had been built for Shirley Temple (later the writers’ building), and walked the stunted remains of the Fox backlot, all that was left after they sold off the 180 acres that became Century City. 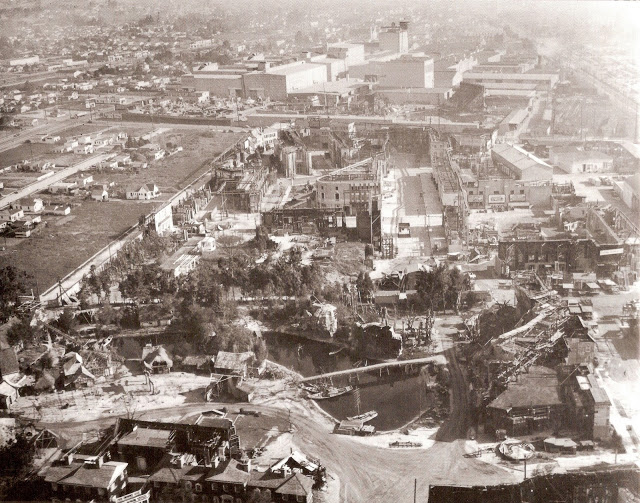 I never got even a glimpse of the colossal MGM backlot, but now I can, and so can you, thanks to MGM: Hollywood’s Greatest Backlot by Steven Bingen, Stephen X. Sylvester and Michael Troyan. This book manages to be both satisfying in its thorough documenting of the physical nuts and bolts of MGM, and tantalizing in its constant reminder that most of this is (if you’ll pardon the expression) gone with the wind. Much as we might wish to step into one of this book’s hundreds of pictures and look around, we will never walk the streets we know so well from Andy Hardy movies, Tarzan pictures, Gene Kelly musicals and The Twilight Zone — and neither, now, will anybody else. (This picture, by the way, shows only the 81 acres of MGM Lots 1 [the complex of buildings off in the distance] and 2 [closer up]. At the studio’s peak there were five other lots sprinkled around that part of Culver City on another hundred acres; they’re out of the picture off to the right.)
The book does have its nits, and I might as well pick them. The authors garble somewhat the prehistory of the three studios — Metro, Goldwyn, and Louis B. Mayer Pictures — before they merged to form MGM. As I’ve recounted elsewhere, director Rex Ingram worked for Metro, not Goldwyn, and his production of Mare Nostrum was not among the financial headaches MGM inherited with the merger. Neither was “Fred Niblo’s Ben-Hur” shooting in Rome (also discussed here); that would be June Mathis and Charles Brabin’s Ben-Hur. Niblo was the director Mayer and Irving Thalberg picked later to clean up Brabin’s mess — back in Hollywood where they could keep an eye on things.

Also, the book could have used a more thorough job of copy editing. There are far more than the usual number of misspellings (“Donald O’Conner,” “legers [ledgers]”) typographical errors (“The Barrett’s of Wimpole Street,” elsewhere called “Wimple Street”), malapropisms (“initialized” for “initiated,” “cache” for “cachet,” “skewered” for “skewed”), grammatical missteps (“…the sets fell in to disrepair…”) and other hard-to-classify errors that could be one or more of the above (“…the seeds of destruction…were sewn…”). You can hardly go five pages without one gaffe or another. (And by the way, was there really a “Red Square” set in Yolanda and the Thief [1945]? I don’t remember one in that picture, which took place in a mythical South American country, but the authors say there was one, and that Lot 2’s New York Street played the role.) 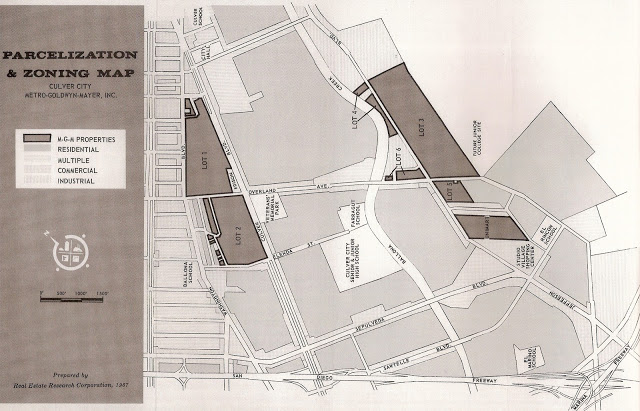 All quibbles notwithstanding, this book is a swell read, a step-by-step tour that takes us through each lot one by one, ushering us in the front gate and taking in every building (on Lot 1) and outdoor set (on the others) in turn. There are plenty of maps, starting with this one showing all MGM’s holdings at its peak. (The two lots on the left are the ones you can see in the picture above.) If you live in the L.A. area and have a passing familiarity with Culver City, it’s easy to get the lay of MGM’s land.

Here’s another one of the book’s maps, this one of Lot 2 — home to Andy Hardy’s hometown of Carvel, Tarzan’s jungle, Romeo and Juliet‘s (1936) Verona Square, the Lord family mansion in The Philadelphia Story, the complex of New York Streets, etc. I don’t have room to reproduce it full-size, but if you Ctrl-click it to open it in a new tab, then “+” it up, you can see it more clearly. The numbers in the columns on the left correspond to shaded areas on the map, and each gets its own mini-chapter with accompanying pictures and a rundown of how each area was used over the years. You’ll spend a lot of time thumbing back and forth between text and maps, but by the time you’re through you’d be able to roam freely around all seven lots without getting lost. 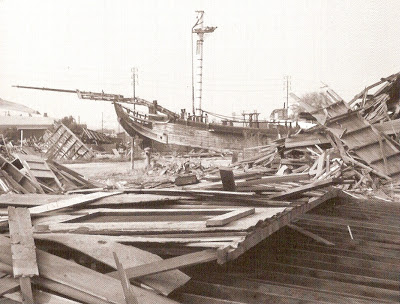 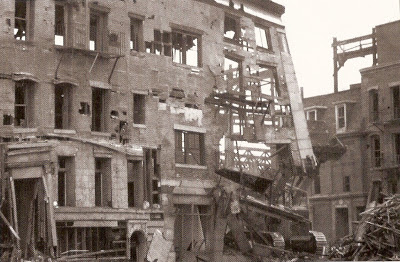 If they still existed — which, except for Lot 1 (now Sony Studios), they don’t. The last section of the book, “Backlot Babylon,” is the hardest to read, and it just gets more and more heartbreaking by the paragraph.
This is where the authors take us through the long sorry story of the disintegration of Louis B. Mayer’s mighty empire. The authors quote a retired publicist, speaking in 1974, as saying that the studio’s last really great year was 1948. The irony in that, which the book makes clear, is that even in ’74 things hadn’t hit bottom, although “the writing was now clearly on the false walls.”
These pages are dominated by pictures like the two here: On the top, the decrepit hulk from 1962’s Mutiny on the Bounty cowers beyond the rubble that was once Lot 3’s Dutch Street and Rawhide Street; on the bottom, a bulldozer polishes off the last of Lot 2’s complex of New York Streets in 1980.

Changing the subject slightly, I just got a DVD on eBay comprised of Kodachrome home movies taken at the 1939 New York World’s Fair. Seeing the place in color is a much more immediate experience than all those old black-and-white newsreels and photos, and what comes through most clearly to me in these 70-year-old home movies is that everything — from the Trylon and Perisphere all the way down to the Amusement Zone rides — looks so absolutely and completely permanent.

It’s like that too in the movies shot on the MGM backlot. I mean, I’ve lived on streets that I don’t remember as vividly as Kensington Avenue from Meet Me in St. Louis or Andy Hardy’s street — which was also Maple St. in the “The Monsters are Due on Maple Street” episode of The Twilight Zone, and the street Bobby Van hopped down in Small Town Girl.

That’s just from seeing them in the movies. How much more solid and permanent they must have looked to the people who actually worked on them. Not that they would have looked or felt real, of course. An actor always knows when he’s on a set, and Mickey Rooney and Lewis Stone surely never had any illusions that the Hardys’ front door actually led anyplace — the company would have to adjourn to a set on one of Lot 1’s sound stages to continue that illusion.

But even so, there must have been a feeling that these sets would always be there, and it’s easy to imagine the wistful bewilderment people like Rooney and Debbie Reynolds and Ann Rutherford felt walking the backlot toward the end — after the carpenters and maintenance crews and greensmen had all been laid off, and there were weeds growing around the doorsteps and torn canvas walls flapping in the Santa Ana Winds. In fact, we don’t have to imagine it; we can see it in pictures like That’s Entertainment! and the documentary-cum-obituaries that date from the 1960s and ’70s. It’s there, too, in dozens of quotes in MGM: Hollywood’s Greatest Backlot, from stars and “backstage” workers alike, and always the subtext is the same: Jeez, what happened?? With the studio humming along on all cylinders, thousands of employees keeping everything fresh and ready to use on a moment’s notice, and packing the commissary every day at lunch, the MGM lots surely seemed as permanent as the pyramids. 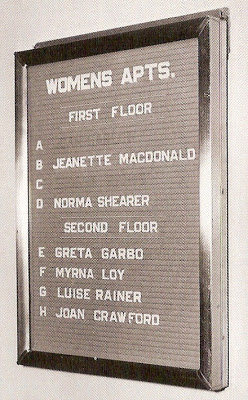 In the end they weren’t, and in fact they never had been. For me, one of the saddest pictures in MGM: Hollywood’s Greatest Backlot isn’t of great sets reduced to garbage or props and costumes auctioned off or used for landfill, it’s one of the simplest. And oddly enough, it’s not from the long miserable decline and fall; it’s from 1937, when the MGM lion was in full roar and the vigorous prime of life. And here it is, a sign on the outside wall of the star dressing room building — which, for the major stars, weren’t just rooms but full homes-away-from-home with bedrooms, kitchens, bathrooms and fireplaces. You can see here that Suite A is presently vacant, but that it once belonged to the recently deceased Jean Harlow. Her name has been removed, and her suite no doubt cleared out for its next occupant (in time it would go to Lana Turner),
but the letters of Jean’s name have left their shadow behind,
like the impression of a pen-press on the
second page of a note pad.
In the end, and for that matter all along, the entire
studio complex of mighty MGM turned out to be
no more permanent than that.