The concluding chapters of London After Midnight by Marie Coolidge-Rask:

Chapter 19 – The Man in the Beaver Hat 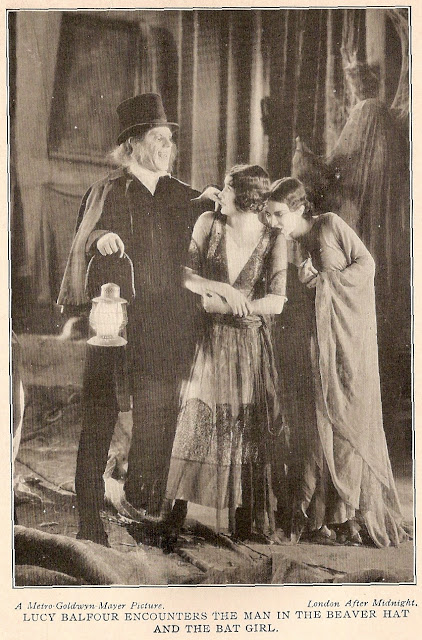 At Balfour House, the man in the beaver hat, lantern in hand, climbs the stairs to the secret room where the bat-woman hovers near the ceiling. Come down, he says, all is ready; she is on her way.

In the overgrown garden the bat-woman waits as Lucy approaches. As the two come together, a shriek like a woman’s voice rends the air. Lucy cowers, but the bat-woman soothes her: “It’s nothing. They’re awake — coming.” Lucy feels herself taken in two strong arms and carried bodily into the house. She sees that her bearer is the man in the beaver hat described by Smithson.

Lucy looks around; tears well in her eyes as she takes in the home she has not seen since her father’s death five years before. She begs the pair with her to tell her who they are.

The man in the beaver hat silences her with a gesture. Footsteps are heard outside. Suddenly there’s the crash of a shattering window and a man tumbles into the room at their feet.

In Hamlin House, Hibbs dashes downstairs to where the servants cluster, roused from their sleep by the sudden hue and cry from Lucy’s room. They urgently entreat Hibbs to tell them what’s going on, but he is incoherent, raving — They’re coming! They’re all around! I go to destroy them!

The unfortunate Hibbs rummages around the kitchen, yard and outbuildings of the estate, raving about an axe and a hickory stake, the implements he must have to destroy the “vampyrs.” He finds an axe in a chopping block and sharpens two pieces of wood into stakes, muttering madly all the while. The servants watch in amazement, afraid to intervene in his maddened state. Soon he is off on his way to Balfour House on his desperate, fevered mission.

At Balfour House he lurks outside a window, his eyes wide, barely suppressing the wild beating of his heart. What he sees through the window drives him madder still: Lucy standing with the man in the beaver hat and the bat-woman. She doesn’t run, she doesn’t flee; she is in their wicked power! She must be saved before it’s too late!

Hibbs leaps through the window, falling at the feet of Lucy and the two fiends in a shower of glass. Before he can move or clear his fevered brain, creatures of unimaginable strength have pounced upon him, overwhelmed him, bound him, borne him off. Is this the end? Has he failed to save Lucy? Is he doomed to be a vampire himself?

At Scotland Yard, the summons to Hamlin House has been received and a squad of constables is ready to set out. The assistant commissioner knows now that Inspector Burke’s preparations — carefully set in motion by the work of an undercover agent — are about to bear fruit.

The constables pile into a car and swiftly depart for their destination, an estate outside London. They are told that when the car is sighted there will be a signal — a siren; they are to reply with a howl, just like the other night.

As the car speeds along, they hear the siren — a long, piercing shriek like a woman’s scream. The car replies with its own special signal, a blaring electric horn like the howl of a dog. Peering into the darkness, the constables see the outline of Hamlin House straight ahead.

At Hamlin House, Colonel Yates hears the howl of a dog, just like the one the night of his and Sir James’s visit to the Balfour crypt. Looking out the window, he sees a car approaching. It must be Scotland Yard, he tells Sir James, and not a minute too soon.

As Yates and Sir James go downstairs, the butler is admitting the police, who have arrived in response to Sir James Hamlin’s request. Sir James introduces the policemen to Colonel Yates, saying he will explain the situation to them; Sir James himself is too distraught.

The colonel surveys the police detail with a military eye, apparently deciding that they will do. Quickly he summarizes the weird train of events that have led to their presence here. Now, he says, they have reason to believe that Miss Lucy Balfour is in dire peril in her former home. The police should proceed at once to Balfour House and be prepared for “instant action.”

Yates turns to Sir James; does he have his revolver ready? Sir James does. Let me see it, says the colonel. Examining the gun, he notes that it has not been fired in a long time and may not be reliable. Turning to one of the officers, he asks for a spare pistol that Sir James can carry in case the need for it arises.

Sir James, seated at his desk, tries to insist that his own revolver will do, but something in Colonel Yates’s eyes stops him. Sir James, in his highly nervous state, seems suddenly transfixed. Colonel Yates moves his hands before the man’s face but gets no response.

Satisfied, the colonel takes Sir James’s desk clock and sets the hands to eight o’clock. He places the clock before Sir James. At twenty-five minutes past eight, he tells Sir James, come to the verandah door at Balfour House.

Colonel Yates leaves with the police. Sir James, he says, will be joining them later.

Lucy is upset at what is happening to Hibbs — those men seizing him, binding him, carrying him away, saying he must be drunk. Jerry is never drunk! The bat-woman tries to calm her. Please, dear, she says, didn’t he tell you to remember your part and do it, no matter what? Yes, Lucy says, but he said he’d take care of Jerry, see that he comes to no harm. And so he will, the woman says, we all will. She turns to the man in the beaver hat. What was wrong with him? Too much excitement, the man says; he’ll be taken care of and kept out of harm’s way. But now we have to work fast.

Lucy pulls herself together. You’d better see the man in the next room, the bat-woman says to Lucy, prepare yourself. It might be a shock and you should get it over with.

Lucy parts a frayed curtain and looks into the next room at the man sitting at her father’s desk. It is a shock. The resemblance is uncanny, eerie. For a moment she feels like a little girl again, the little girl who came into this very room and found her father dead, sitting where that man is now. Lucy looks down at herself and sees that she is not that little girl at all anymore. This man can’t be her father — but he looks so like him.

Lucy prays for the strength to do what she must. She goes up to the man, who rises to greet her. They talk briefly. She answers his questions about the night she last saw her father alive. He tells her he can only imagine how difficult this is for her. He has three daughters of his own, and he hopes any one of them would feel just as Lucy does. But he also hopes that they would find the strength to do what must be done. It’s so important. “Play the role,” he says, “and make it a success.” 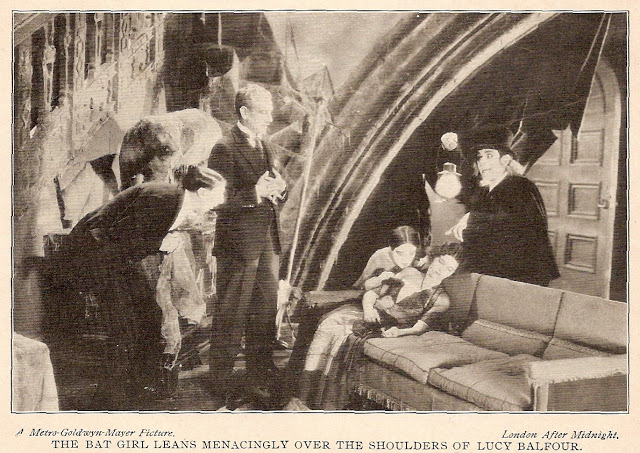 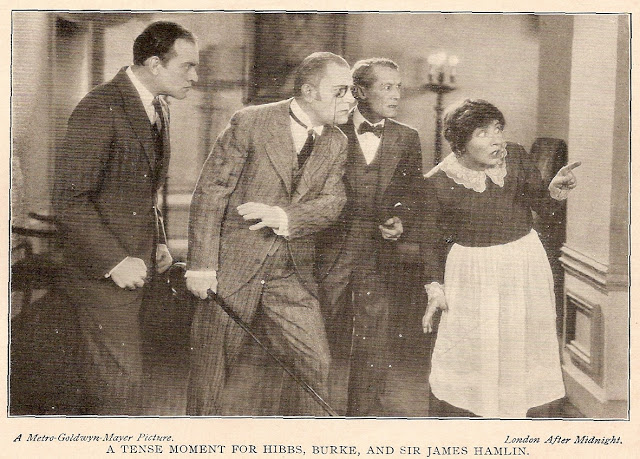 So there you have it, friends: London After Midnight — a Halloween treat with a trick. If you’ve seen 1935’s Mark of the Vampire, the twist came as no surprise to you; for that matter, even in 1927 the New York Times commented that whether the ending surprised anyone would be “a matter of opinion.”

I haven’t read Philip J. Riley’s reconstruction of the picture — honestly, I can’t remember now whether it was the opportunity to buy it or the good sense that I lacked in 1987 — but I have seen the Turner Classic Movies reconstruction, and there are major discrepancies between it and the story told by Marie Coolidge-Rask. In TCM’s version, Hibbs is identified as Arthur, not Jeremiah (Jerry), and he’s Sir James’s nephew, not his secretary. (Variety’s Mori says Hibbs is Roger Balfour’s nephew, but that doesn’t make sense and is probably a mistake on Mori’s part.) Neither the TCM version nor the reviews mention the murder of Harry Balfour, or even his existence, although the illustration in the novel (see Chapter 2, “Another Mystery”) suggests Harry must have been in there somewhere. (Oddly enough, in the caption Jules Cowles, who played Gallagher the chauffeur, is identified by his own name rather than his character’s.)

Most important of all, the idea of Inspector Burke operating incognito as Colonel Yates seems to have been entirely Ms. Coolidge-Rask’s invention; in the reconstruction and both reviews Burke is openly himself throughout. He is even shown investigating the “mysterious” death of Roger Balfour and deciding it was suicide, then coming back five years later to prove it was murder — the Times reviewer pinpointed the howling illogic of that (“…Burke of Scotland Yard, the genius who wills to solve a murder mystery five years after he has declared it to be a case of suicide.”).

All things considered — and with no true copy of London After Midnight, having only Variety’s detailed recounting, the New York Times’s musings, and TCM’s version to go on — I have to say there’s good reason to believe that Marie Coolidge-Rask, despite her cumbersome way with words, made a considerable improvement on Tod Browning’s story. Once you accept the basic premise — an elaborate police sting to hypnotize a murderer into reenacting his crime — her story has its own clear logic and builds a good amount of suspense. There are many nicely creepy moments — not least the eye-opening whiff of pedophilia in Sir James’s character, which in the novel surely goes beyond what the Hays Office would have tolerated in 1927. Much of the plot as it reads must have been the novelist’s creation; there seems far too much to fit into a picture that Variety says ran only 65 minutes (TCM’s reconstruction runs 46). And the book has a good sense of pace, becoming quite breakneck as the climax approaches — just about the time Hibbs goes crazy we begin to feel as if we have, too; as Lucy’s world is turned topsy-turvy, so is ours.