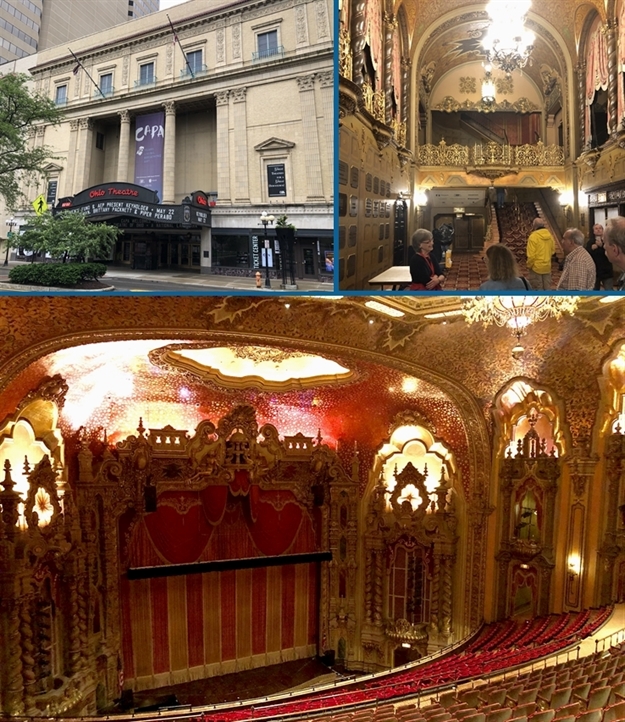 Cinevent this year began with something new: A tour of Columbus’s Ohio Theatre. The tour cost extra, and ran late enough to conflict with the first show in the screening room — but it was worth it on both counts.

The theater is located on State Street, across the street from the south entrance to the Ohio State House, on the site of the original Columbus City Hall. Commissioned by Marcus Loew (who didn’t live to see it), it was designed by Thomas W. Lamb, one of America’s foremost theater architects of the 20th century. Some of Lamb’s other designs included: In New York, the Academy of Music (later the Palladium), the Capitol, and the Ziegfeld (the original one, at 6th Avenue and 54th Street); in San Francisco, the Fox; in Boston, the B.F. Keith Memorial (now the Boston Opera House) and the Orpheum. The Ohio opened on St. Patrick’s Day 1928 with the Greta Garbo silent The Divine Woman.

As a Loew’s Inc. theater seating 3,000 and lavishly appointed in Spanish Baroque style, the Ohio thrived as a first-run venue for MGM pictures, even after the U.S. v. Paramount consent decree divested the studios of their theater chains, until suburban sprawl and changing patterns in entertainment (read: television) spelled trouble for the big downtown picture palaces. The Ohio officially closed in February 1969 with the Michael Caine World War II picture Play Dirty. At that point the Ohio appeared doomed; a local developer planned to demolish it (and the adjacent Grand Theatre) in favor of a high-rise office building to be built on the site.

Fortunately, a groundswell of local Save-the-Ohio sentiment led to the creation of the Columbus Association for the Performing Arts (CAPA). CAPA harnessed public sentiment and the support of business and government leaders to purchase the Ohio and set it on the path to restoration to its original appearance (done in stages throughout the 1970s), with shows and concerts all the while to keep the ball rolling. Next door, the Grand Theatre was eventually torn down; the site is now Galbreath Pavilion, an annex to the Ohio providing additional lobby space, offices, and rehearsal rooms.

CAPA’s success with the Ohio enabled it to expand its activities, even beyond Columbus. Locally, it now also operates the Palace (another Thomas Lamb creation three blocks away), the Lincoln, and Columbus’s oldest surviving theater (since 1896), the Southern. The Ohio Theatre remains CAPA’s flagship and base of operations, and rightly so — as these pictures attest, it’s a breathtaking sight to see (it’s the only theater I’ve ever seen with not just a second, but a third floor lobby). I’ll point to CAPA the next time America’s coastal elites decide to lord it over their cultural inferiors in flyover country. I would also point to such theaters as the Fox in San Francisco, Clune’s Auditorium in Los Angeles, New York’s Roxy and Ziegfeld, and the Ambassador in Washington, DC — only I can’t, because they don’t exist anymore. 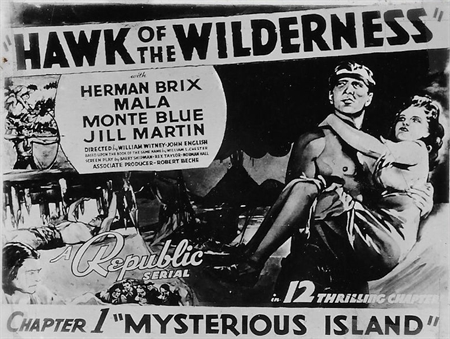 As I said before, the Ohio Theatre tour ran long enough that I missed the first event in the screening room, Chapters 1-3 of this year’s serial, Republic’s Hawk of the Wilderness (1938). This may have prevented me from tuning in to the serial’s wavelength — whatever that is. So perhaps I should reserve final judgment until I’ve had a chance to see the whole thing from the beginning. All I can say right now — having seen Chapters 4-6 on Day 2, then the final three on Day 4 — is that I’m not particularly eager to catch up with what I missed.

Based on a 1935 series written by William L. Chester (a sort of minor-league Edgar Rice Burroughs imitator) and published in the pulp magazine Blue Book, Hawk of the Wilderness opens with a scientific expedition in search of a lost-world-type island somewhere north of the Arctic Circle, yet warmed to a near-tropic clime by a volcano. When the ship founders in a storm, the expedition’s leader (whose wife and infant son are along for the ride) throws overboard a bottle with a desperate message for his colleague Dr. Munro. He and his wife go down with the ship, but his Native American assistant (Noble Johnson, the native chief of King Kong‘s Skull Island) makes it to the island with the scientist’s son.

Twenty-five years later the child has grown into Kioga, or “Hawk of the Wilderness” (Herman Brix, still a year away from changing his name to Bruce Bennett), so called by the island’s natives (whose ancestors remained there thousands of years ago while others continued on to the mainland, eventually to be known as “American Indians”). Kioga has been befriended by one of the locals, while others, led by a malcontent named (so help me) Yellow Weasel, want to kill him to appease their volcano god. Into all this comes a rescue expedition, led by Dr. Munro, the addressee of that long-ago message in a bottle, the message having been finally delivered by a seafaring criminal masquerading as a fisherman, who sniffs the possibility of treasure on the island and is just waiting for a chance to make his move.

As that summary suggests, Hawk of the Wilderness is an odd mash-up of Tarzan of the Apes, The Last of the Mohicans, and Treasure Island. It has a good reputation, if Bob Bloom’s program notes and some comments on the IMDb can be believed, but I’m afraid I wasn’t able to get into it myself. For such a plot-heavy story — Dr. Munro’s daughter Beth and Kioga fall in love, alliances are built and broken as characters hunt treasure, flee from or fight war parties, and contend with the erupting volcano — I found it oddly uneventful; certainly compared to last year’s The Masked Marvel, whose nonstop fistfights, chases, crashes and explosions made it a textbook example of “action-packed”. But to be fair, I only saw half of this year’s chapter-play — and just the second and fourth quarters at that. So I defer to Bob Bloom’s judgment: “Hawk of the Wilderness is a rarely-seen serial. It is available only through grey-market dealers on eBay. It’s fast-paced adventure with 12 chapters that will keep you coming back throughout Cinevent.” (I’ve ordered one of those grey-market eBay videos to fill the gaps in my viewing; if I have anything to add about it, I’ll post an update.) 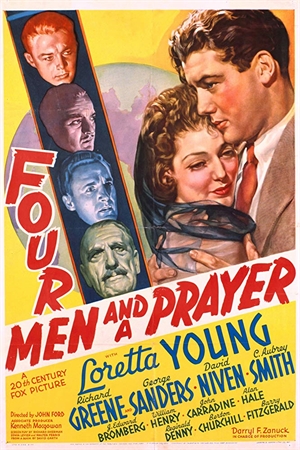 After Hawk of the Wilderness came the first feature film of this year’s Cinevent: John Ford’s Four Men and a Prayer (1938). Ford was on a roll in those days, although this particular picture came during what his biographer Scott Eyman called a “temporary malaise” — after Ford’s first Oscar for The Informer (’35) and the twin high points of Wee Willie Winkie and The Hurricane (both ’37), and just before the string of jewels and outright masterpieces that would run from Stagecoach (’39) through How Green Was My Valley (’41).

Four Men and a Prayer hardly deserves mention in the same breath with those, but it’s still pretty good; if nothing else, it has a certain curiosity value as Ford’s only murder mystery (at least, as far as I can recall). The four men of the title are Richard Greene, George Sanders, David Niven and William Henry as the sons of C. Aubrey Smith, a colonel of the British Army in India who has been found guilty of dereliction of duty in bringing on a massacre. Drummed out of the service in disgrace, he returns to England and calls a family council. He tells the boys he was the victim of a frame-up (of course they never doubted him) and he has the papers to prove it. But before he can tell them more, he is found dead — with his briefcase empty.

The coroner declares his death a guilty suicide, but the colonel’s sons know better, and they set out to clear his name — with the assistance of top-billed Loretta Young as a wealthy heiress with eyes for Greene. Their investigation sends the brothers (and Loretta) globe-trotting off in all directions, from India to Buenos Aires to Alexandria — all, of course, without leaving the safety of the 20th Century Fox backlot (which has an exotic appeal all its own). Along the way, Ford’s feel for pacing and eye for striking pictorial compositions keep raising the movie above the humdrum level of Richard Sherman, Sonya Levien and Walter Ferris’s script (from a novel by David Garth), especially in an episode during the ruthless quashing of a South American revolution. The resolution of the plot, if not exactly surprising, is at least satisfying — and, after one more “malaise” picture (Submarine Patrol later in ’38), Ford would move on to Stagecoach and his white-hot phase.

And Day 1 had just begun. I’ll continue with the Thursday lineup next time.