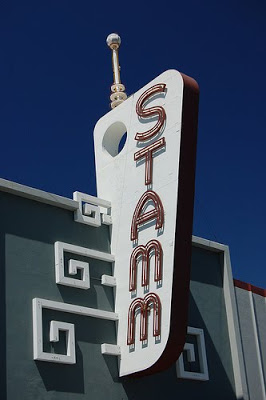 My friend John McElwee over at Greenbriar Picture Shows, in his current post on John Ford’s Stagecoach, mentions (as he often does, with clear affection) his hometown Liberty Theatre, which ran Stagecoach in April 1939 and is still showing movies today. He doesn’t know how I envy him, having a childhood movie haunt still around to revisit and savor. Of all the movie theaters I frequented in the first thirty years of my life, I can count on the fingers of one hand the ones that are currently in operation — and I’d still have at least a thumb and pinkie left over.

First and rosiest among these memories, my childhood  home-away-from-home, was the Stamm Theatre in Antioch, Calif., a small town nestled in the hills of Contra Costa County about 40 miles east of San Francisco. Antioch is a lot bigger now, and has overrun many of those hills, but in the 1950s the population hovered just under 20,000 and the Stamm was the movie house of choice. The Stamm’s Moderne marquee tower, shown here in a recent photo, still stands, its futuristic spire looking like the nose of a Flash Gordon rocket ship pointed at the stars — albeit with the original colors (which I remember as red, chartreuse, dark green and gold) muted to a conservative gray and white. It was once a landmark in town, especially at night in its mostly residential neighborhood, and it adorned the Stamm’s daily ads in the Antioch Ledger. The Stamm was where I’d rather be most of the time. One Sunday in 1959, I passed up my first chance at an airplane ride; my father had chartered a small private plane to take the family on a fly-around of the county, but I preferred to spend the afternoon at the Stamm watching Ingrid Bergman in The Inn of the Sixth Happiness. 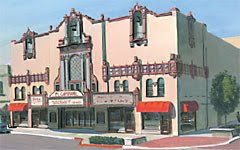 There was another, older theater in town, the El Campanil, opened in 1928 as a combination vaudeville and moving picture house, shown here in a postcard image from the 1930s. By the 1950s the El Campanil was open only intermittently, alternating movies with live performances by local community theater companies (I saw my father perform there in Curse You, Jack Dalton and You Can’t Take It with You) and other performing groups; my dance teacher held her annual student recitals there, and I first performed on the El Campanil stage at age seven, tapdancing to “You’re a Grand Old Flag” in a red-and-blue sateen toy-soldier uniform. As for movies, my mother and uncle took me there to see a reissue of Snow White and the Seven Dwarfs (on a double bill with, of all things, Abbott and Costello in Buck Privates), and I remember attending the occasional Saturday kiddie matinee there.

But most of the time, Saturday afternoons or not, it was the Stamm. It was movies all year round there, and the house itself was — at least to my young eyes — homier and more welcoming than the Spanish-themed, cavernous and rather forbidding El Campanil. I wish I could give you some illustrations of the Stamm’s warm red-and-green interior, but the Stamm family seems to have neglected to photograph it before the building was gutted to the bare concrete walls in the late 1990s. All I have are some copies-of-copies provided to me by the Theatre Historical Society of America (THSA) in Elmhurst, Ill. (click the link to visit their Web site and learn of their worthy mission) of an article that appeared in the “Better Theatres” section of Motion Picture Herald on February 5, 1949, as the Stamm was first opening for business. 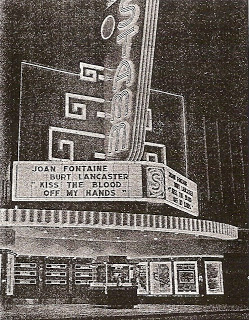 Here, for example, is a picture of the exterior during the run of Kiss the Blood Off My Hands, very possibly the feature that inaugurated the theater. (UPDATE 6/16/15: My uncle attended the Stamm when it was brand new, to see Station West with Dick Powell and Jane Greer. He remembers that as the Stamm’s first program, and I suspect he’s probably right.) If you don’t mind going afield to see some images I can’t reproduce here, there’s a copyrighted picture of the Stamm from 1986 here (scroll down) that shows the original red formica-covered doors. Combine that with this ad for Gulistan carpets from the Feb. 5, ’49 Motion Picture Herald and, if you imagine the doors and walls red and that Gulistan carpet in two-tone pale green, you’ll get an idea of the feel of the Stamm’s lobby. At the right edge of the ad, you can see the steps leading down to the “lounge area” and the unseen men’s (left) and women’s (right) restrooms. [UPDATE NO. 2, 11/27/10: The link to the Gulistan carpet ad is now dead; if I can track the picture down, I’ll correct the link. — JL] 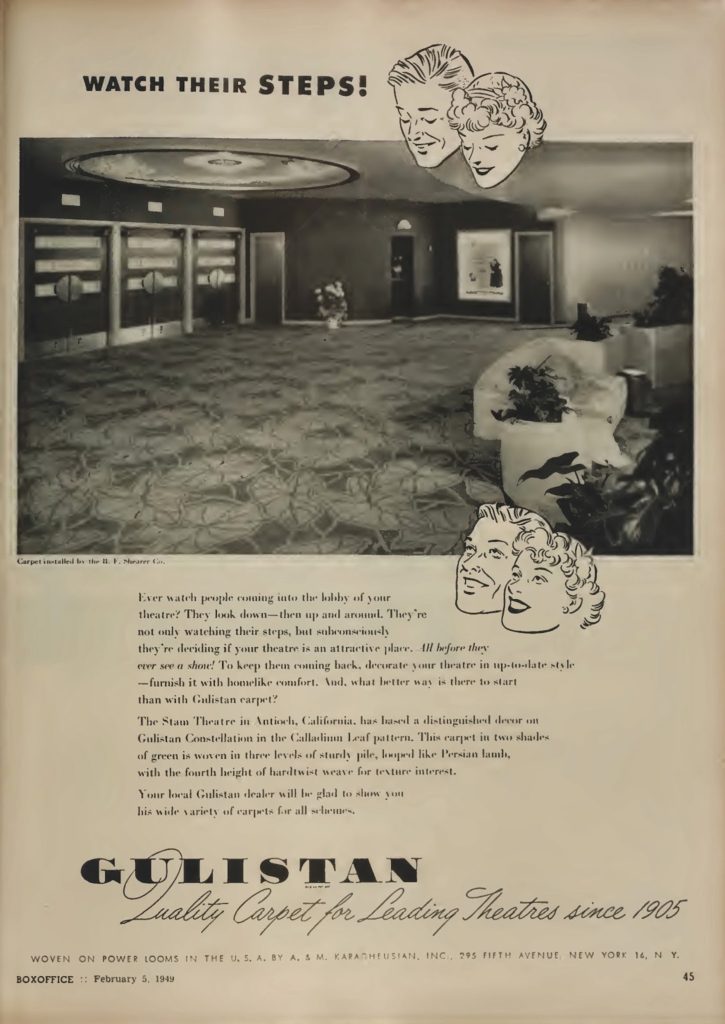 UPDATE NO. 3, 3/18/14: Joe Vogel of Cinema Treasures has kindly shared a repaired link to that Gulistan carpets ad; the ad can now be seen here as part of an online archival copy of that issue of Motion Picture Herald. But better than that, now I’m able to reproduce the ad, and here it is. As I said, the carpet is two-tone green, the doors red with brass handles and baseboards and milk-glass window slits. The far wall is also red, the ceiling and sofa ivory-colored, as is the far wall leading off to the auditorium. Compare this picture of the lobby with the copy of the floor plan below and you have a pretty clear idea of the layout. And check out that sofa! In those days, most of my friends and I wished our living rooms were this comfy.
UPDATE NO. 4, 1/28/22: All the links in the previous two paragraphs are now dead. (Who ever said the Internet was permanent, eh?) Except one: Joe Vogel’s profile page is still there, as is the rest of the Cinema Treasures Web site. In fact, you can find a photo of the Stamm from 1974 here. In that image the place is much as I remember it — the red leather doors and the free-standing box office have not yet been removed, and best of all, the Stamm’s dazzling neon sign and marquee are blazing away, lighting up the theater’s sleepy residential neighborhood and looking like they can be seen all the way to San Francisco. The photos tab on this page provides more images, some of which will soon be added here. 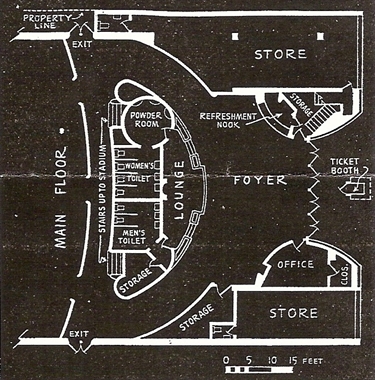 Anyhow, back to that Gulistan ad with its view of the lobby. To help you orient it to this copy of the floor plan, the camera is near the top center of this image, next to the Refreshment Nook, with the lounge and restrooms off to the right.
Not that we spent much time in the lobby or the lounge. The main attraction, naturally, was the auditorium, divided between a main floor of about 900 seats and a loge section seating another 208, where for an extra 25 cents over the regular adult admission you could sit in raked stadium seating in plush rocking-chair comfort. Since a child admission was only a quarter, my brother and I naturally preferred to rough it in the regular chairs down below — we were only kids and those seats were plenty big enough for us and closer to the screen. Besides, we had other things (like popcorn, candy and sodas) to spend the extra money on. 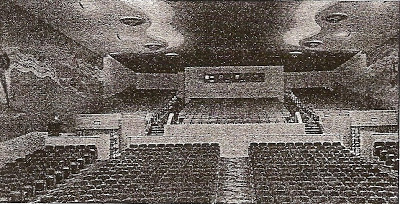 Here are two views of the Stamm’s auditorium, first from the stage looking back, then (below) from the back looking at the screen. You can just glimpse the Rockwell Kent-style murals on the walls of fishermen casting nets, farmers sowing seeds, and women at flowing Art Moderne wells. They were lit by ultraviolet sidelights that gave them (and the teeth and clothes of people in the audience) an eerie blue glow. 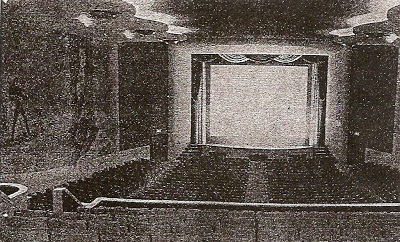 By the time I came along, the Stamm had converted to CinemaScope, so the proscenium and screen I knew were much wider than in this picture from 1949. Still, the house looks much as I remember it. If I squint very hard and jam my imagination into Warp Eight, I can almost believe I see the little hole in the center of the stage through which a microphone would rise whenever Mr. Stamm wanted to stalk out and tell us we were making too much noise, and if we didn’t quiet down like nice little ladies and gentlemen, he’d turn off the movie and make us all go home. 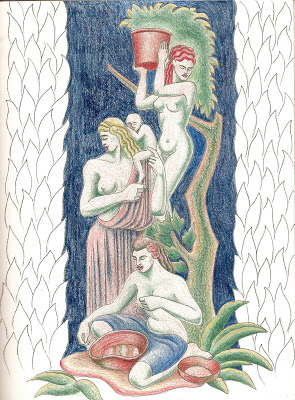 I have one more memento of the Stamm Theatre, shared with me by the artist, Gary Lee Parks of the THSA, and used here by permission. When Mr. Parks’s request to photograph the Stamm’s alfresco paintings was refused by the Stamm family, he did the next best thing. He bought an admission ticket, then sat in the audience with his sketchbook and pencil and copied one of the paintings in black and white, making color notes, which he turned into a full-color rendering as soon as he got home. (The movie he sat through, by the way, was The Coneheads; such dedication!) This painting can just barely be discerned as a dim smudge on the left side of the view above, the one facing the screen. I can vouch that Mr. Parks’s recreation is accurate; this painting remains particularly well-remembered by me — for obvious reasons (this was, after all, the 1950s). To tell the truth, the recollection of this picture glowing in the unearthly blacklight of that auditorium may have almost as much to do with my vivid memories of the Stamm as the movies I saw there.

The Stamm is gone now — all but that looming facade — converted wall-to-wall into an Apostolic Church. Paradoxically, the El Campanil survives virtually intact, a multi-use performing arts center (just as it was when I was a 6-year-old tap dancer) saved from the wrecking ball by a citizens’ preservation drive in 2003. Not enough people cared to preserve the Stamm, evidently; it was doomed, no doubt, by its late-’40s movies-only design. But in its day — and probably for some time after its day had passed — it was where you went if you wanted to see a movie anywhere around Antioch.