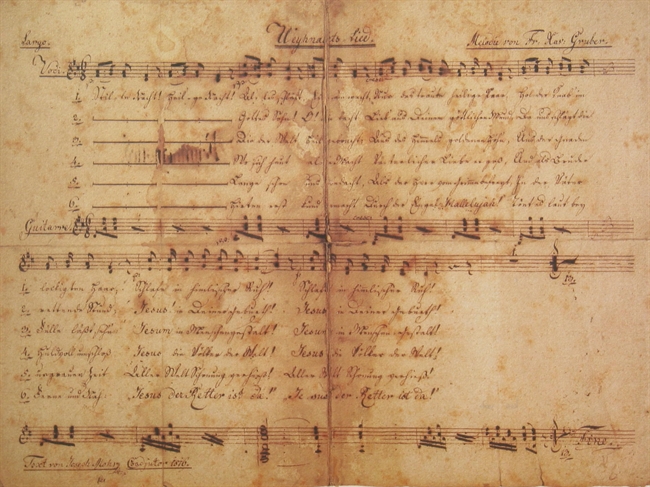 I know this is a departure from the subject of movies and the Golden Age of Hollywood, but as the Christmas Season rolls around once again, I don’t want it to go unobserved that 2018 marks the Bicentennial of the most familiar and beloved of all Christmas carols: “Silent Night”.

Or rather, strictly speaking, it’s the 200th anniversary of the carol’s original version, “Stille Nacht, Heilige Nacht”. It wasn’t to become “Silent Night” until 1859, when it was translated into English by Fr. John Freeman Young, an Episcopal priest in New York City. But as “Stille Nacht”, it was first performed at Midnight Mass on Christmas Eve 1818 by its lyricist, Fr. Joseph Mohr, and composer, Franz X. Gruber, accompanied by Herr Gruber on guitar. Rather like Christianity itself, “Silent Night” first came into the world in a humble, even obscure imperial backwater — in this case Oberndorf, Austria — then proceeded to be embraced around the world in a remarkably short time. The song’s sublime spiritual simplicity continues to speak for itself, as it has for fully two centuries.

And in another departure from writing on Classic Hollywood, I’m sharing once again a contribution of my own to the Yuletide Season. As most Cinedrome readers will probably know, writer Philip Van Doren Stern once wrote a little story he called “The Greatest Gift”. He worked on it from 1939 to 1943, then, when he felt it was ready, he found himself unable to interest anyone in publishing it.  So Stern had 200 copies printed in a little booklet and sent them out to family and friends as his Christmas card that year. In time, the story came to the attention of Hollywood, and eventually, after a few false starts here and there, director Frank Capra made it the basis for his 1946 picture It’s a Wonderful Life with James Stewart and Donna Reed.

Taking a leaf from Philip Van Doren Stern, and in keeping with the Spirit of the Season, I’m offering a little story of my own as a sort of Christmas card for my Cinedrome readers. Unlike “The Greatest Gift”, it has nothing to do with movies or Hollywood; it’s just a tale told to me by a wise and wonderful older person I once knew. It’s called “The Sensible Christmas Wish”, and you can read it by clicking here.

If you like the story, feel free to share it with friends and family. Please remember, though, that like everything else here at Cinedrome, it is under copyright, and all rights are reserved.