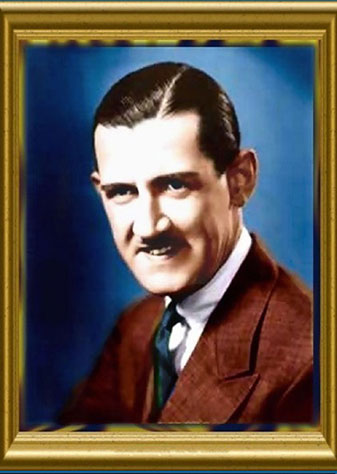 A regular feature at every Cinevent is a program of Charley Chase shorts. If you don’t recognize the name, it’s worth the effort to familiarize yourself. Unlike some other greats of silent comedy (Chaplin, Keaton, Lloyd, Laurel and Hardy), Chase never graduated from shorts to features (though he turned in a delightful supporting performance in Laurel and Hardy’s Sons of the Desert in 1933). Still, his output was prodigious; Cinevent could present a program of five of his shorts (assuming they all survived, which unfortunately they don’t) and go 50 years without repeating one. Cinevent regulars and others familiar with him may skip the next two paragraphs.

Charles Joseph Parrott was born in Baltimore in 1893. He began performing in vaudeville as a teenager and started in movies at 19. After stints with Al Christie and Mack Sennett, he joined Hal Roach as a director in 1920 and by 1922 rose to be general manager of the studio. It was Parrott who brought Oliver Hardy to the Hal Roach “Lot of Fun”; he also recruited Robert McGowan to oversee Roach’s Our Gang comedies, which McGowan did for 14 years.
But Parrott found admin work unrewarding, and by 1924 he returned to performing. Rechristened Charley Chase (a wordplay on the title of a popular World War I-era song, “Chase Me Charlie”), he developed his own comic persona as a lanky, dapper, bedeviled everyman, and was a mainstay of Hal Roach shorts for over ten years, silent and sound, though always a third banana behind Our Gang and Laurel and Hardy. When Roach cut him loose in 1935 (the reasons are a little vague; Roach may simply have been retrenching), he wound up at Columbia starring in his own series of shorts and directing others for the Three Stooges (including one of their best, Violent is the Word for Curly). By this time health problems, exacerbated by alcoholism, were dogging him, and when his beloved younger brother James (who had his own substance-abuse problems) died in 1939, Charley’s drinking soared out of control until a heart attack killed him in June 1940 at age 46. 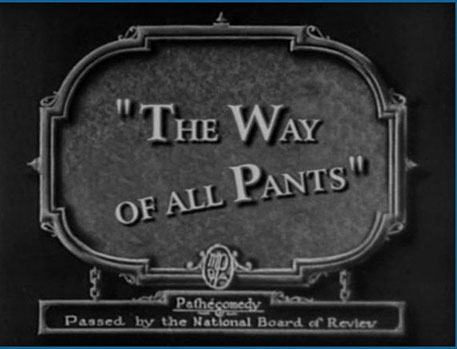 That’s the quick-and-dirty version of Chase’s career, and some day I may post on him in more detail. For now, suffice it to say that Cinevent is doing its share to keep Chase’s name alive (as Richard Roberts aptly put it, he’s not so much neglected as taken for granted) with these regular annual tributes. This year the Cinevent audience got a real scoop: in addition to the shorts Powder and Smoke, Stolen Goods, Too Many Mammas (all 1924), and Looking for Sally (’25), the Chase program included The Way of All Pants (‘27), complete for the first time in a couple of generations. A truncated version of Pants has survived in the Robert Youngson compilation The Further Perils of Laurel and Hardy (’67), but the complete two-reeler was long believed lost. A British release print was recently discovered, with some damage due to age and decomposition; it was digitally restored, then transferred back to 16mm film for screening in Columbus. The whole thing was touch-and-go right down to the wire: the print wasn’t completed until just a few weeks beforehand; it wasn’t even mentioned in the program book because they weren’t sure it would be ready in time to be “re-premiered” at Cinevent.
Anyhow, The Way of All Pants (U.K. title The Way of All Dress, since “pants” was considered vulgar in Britain at the time) was an ingenious delight, ringing endless changes on men (beginning with Charley) losing their trousers at a high-tone dinner party. A canine performer identified as Buddy the Dog all but stole the show. (NOTE: Lacking program notes, I’ve had to rely on my memory. Richard M. Roberts, if you’re reading this and I’ve got any details amiss, feel free to set me straight.) 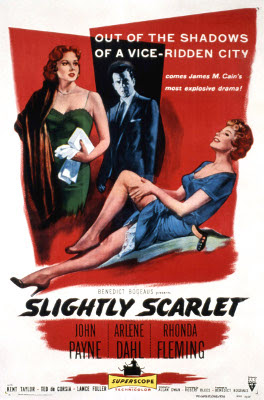 The evening highlight of Day 2 was Slightly Scarlet, a 1956 Technicolor film noir (if that’s not a contradition in terms) about two sisters, one nice (Rhonda Fleming) and one naughty (Arlene Dahl), with John Payne as the political muscle man to a corrupt city boss (Ted de Corsia) serving as the rope in a tug-of-war of female sibling rivalry. It was based on a novel by James M. Cain (better known for Double Indemnity, Mildred Pierce and The Postman Always Rings Twice) entitled Love’s Lovely Counterfeit; if nothing else, the movie at least improved on Cain’s title. Directed by the venerable Allan Dwan, it was a suitably fast-paced melodrama of sex and politics set amid the now-retro decor of 1950s moderne-ity, and it demonstrated conclusively that whatever you might think, Rhonda Fleming and Arlene Dahl are not, in fact, the same person (both ladies, God bless ’em, are still with us at this writing, 92 and 90 respectively; continued long life to them both). Cinevent’s print had deliciously lurid Technicolor but was presented in the standard 4:3 aspect ratio and not screened in “Superscope”. Whatever that is.
After that, another silent, White Tiger (1923), with Wallace Beery as a jewel thief who teams up with two confederates, Priscilla Dean (top-billed) and Raymond Griffith — concealing from them both the fact that not only are they brother and sister separated in infancy, but Beery himself betrayed their father and brought about his death. It was directed and co-written by Tod (London After Midnight) Browning, who could always be counted on to come up with a real whopper.
Day 2 closed out with a midnight snack: An episode of the short-lived (1961-62) TV series Bus Stop, which was unrelated to the William Inge play or the Marilyn Monroe movie, but essentially a dramatic anthology series with a few continuing characters playing peripheral roles in each episode. This one was “I Kiss Your Shadow”, from a story by Robert (Psycho, “Yours Truly, Jack the Ripper”) Bloch, about a man (George Grizzard) haunted — in every sense — by the death of his neurotic, possessive wife (Joanne Linville) in a car crash. It was (spoiler alert!) a creepy, atmospheric variation on Poe’s “The Tell-Tale Heart”, just the thing to send you back to your hotel room to sleep with the lights on and the flat-screen TV blaring all the rest of the night.
Next up: Day 3, Saturday, featuring a supremely anarchic turn by Olsen and Johnson, the two-man Monty Python of the 1940s, and an exhilarating horseless turn by the pre-Stagecoach John Wayne…