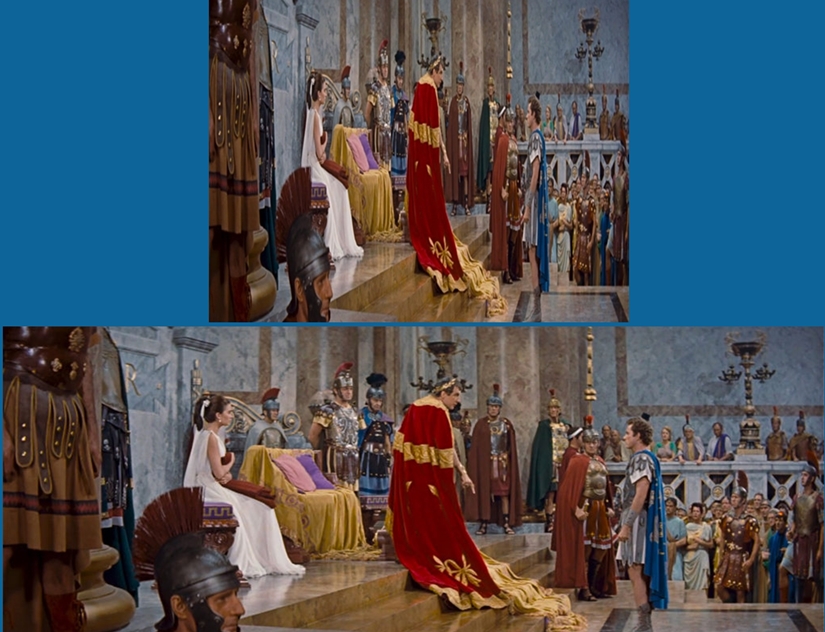 Remember all those movie-industry honchos trekking out to Oyster Bay to see Cinerama? One of them was Joseph M. Schenck, chairman of the board of 20th Century Fox. Like everybody else, Schenck passed on Cinerama, but as he did so he added ruefully: “I’ll be buying this process someday, and it will cost me ten times as much.”
Fox president Spyros Skouras spared Schenck the embarrassment of that. Skouras had gone out to Oyster Bay too, and been impressed, but he allowed Fox’s research department to talk him out of buying into Cinerama. Now, as This Is Cinerama‘s sensational debut woke Hollywood from its slumber, Skouras turned to his research department, saying in effect: You blew this one, boys; you’d better make it good.
They did. Digging back, they came up with a process a French professor named Henri Chretien had tried unsuccessfully to peddle in Hollywood back in the ’20s. He called it Anamorphoscope, and it involved using what Chretien called a “hypergonar” lens on the camera to squash a wide angle of view onto standard 35mm film, then a compensating lens on the projector to stretch it back out again. The good news was that Chretien’s patent had expired in 1951 and Anamorphoscope was now in the public domain; the bad news was that Chretien had the only set of lenses. Long story short, Skouras tracked Prof. Chretien to his home in Nice, reached an agreement for the use of his lenses (which were later refined and reproduced by Bausch & Lomb back in the States), and in February 1953 Skouras announced the process under a new name, CinemaScope (whoever came up with that replacement for “Anamorphoscope” surely earned his pay for the week!).
The first CinemaScope picture was to be Fox’s Biblical epic The Robe (pre-production was already underway, but was suspended to retool for the new process), and henceforth every 20th Century Fox picture would be shot in CinemaScope. Skouras and studio chief Darryl F. Zanuck encouraged other studios to sign on with their “new” process. MGM and Walt Disney took the bait at once; other studios hung back, exploring their own wide screen options. 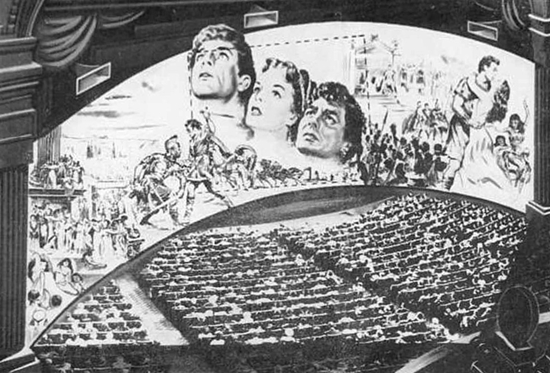 Early ads for CinemaScope, like the one I’ve reproduced here, emphasized a resemblance to both Cinerama and 3-D (“It’s the miracle you see without glasses!”) that didn’t really exist. While CinemaScope did originally call for a curved screen, most theaters didn’t bother with that. Even in The Robe‘s first-run engagements, the curve was much shallower than in this ad, and nowhere near as deep as Cinerama’s. (A good thing, too: you have to feel sorry for that poor sucker on the left end of the seventh row — what kind of view could he have had?) Anybody who compared Cinerama and CinemaScope side-by-side (so to speak) could see there was no real comparison. But in truth, most moviegoers couldn’t do that. Among Hollywood professionals, CinemaScope didn’t have to be as good as Cinerama, as long as they could sell it that way to the millions who hadn’t yet seen the real McCoy. Besides, it was still a huge change from movies-as-usual, and something folks couldn’t get on those newfangled 17-inch black and white TV screens in their living rooms.

And it was relatively cheap. While the Cinerama people did their best to lowball the estimated cost of converting a theater, the truth was it could run as high as $200,000. Moreover, hundreds of seats could be lost either to make room for the three projection booths or because of unacceptable viewing angles, thus limiting potential revenue. Conversely, CinemaScope (Fox promised) could be installed with no loss of seats, and for the mere cost of a set of lenses, a new screen, and a three-channel magnetic sound system — a sizeable investment, yes, but nothing like the fortune needed for Cinerama. (This is a good time to remind you that we’re talking about Eisenhower dollars here; to get a sense of 2022 equivalents, you should multiply by about 11.25 — $2,250,000.) 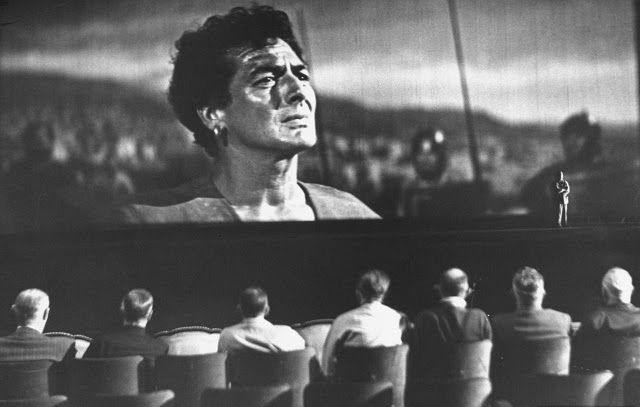 Fox mounted an aggressive and well-organized campaign to promote CinemaScope (Skouras was battling a hostile takeover, so ‘Scope had to succeed), and in the end it would effectively sink Cinerama Productions Corp.’s hopes of partnering with one of the major studios. Even as early as March and April ’53, when Fox began holding nationwide demonstrations of CinemaScope for industry and press, Cinerama was feeling the pinch. Not only were leads on new investment drying up, but some contractually committed investors were backing out, citing a “changed circumstances” escape clause in their contracts. Cinerama still had only three venues in the world (a fourth, the Palace in Chicago, wouldn’t open until July due to a protracted haggle with the local projectionists’ union). Cinerama Productions Corp. had to find funding to supplement their high-overhead box-office take if they were going to open more theaters and maintain a foothold in the market they had created, to say nothing of producing follow-up features to This Is Cinerama.

They considered their options. A public stock offering was one, but sales of Cinerama Inc. stock had already been less than expected. Another possibility was to seek financial participation from a theater circuit rather than a studio, and they decided on that. A logical choice for such an arrangement was the Stanley Warner Corporation, since Cinerama had already been dealing with them: the newly Cineramified Warner Theatre in Los Angeles was theirs, and This Is Cinerama was slated to move from the Broadway Theatre to New York’s Warner in June 1953 (the Shubert brothers wanted their house back). 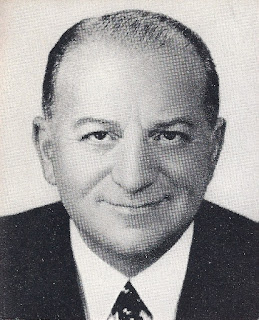 Before we go on, a clarification: “Stanley Warner” wasn’t a person. How the name came about (as simple as I can make it) was this: Stanley Warner’s president was S.H. Fabian, who had gotten into the theater business in his father’s small circuit of houses in New Jersey in the 1920s. In 1926 Fabian Theatres merged with another chain, Stanley Company of America. Two years later that circuit was acquired by Warner Bros. for the exhibition of their pictures, and Fabian partnered with one Samuel Rosen to rebuild his own chain in New York State, Fabian Enterprises. In the early 1950s, when federal antitrust action compelled the studios to divest themselves of their theater chains, Fabian went to Harry, Albert and Jack Warner to (essentially) buy his old theaters back. The corporation he formed for this might have been called Fabian Rosen, or Warner Fabian, but instead it was Stanley Warner.

As the corporate heir (as it were) to Warner Bros. Theatres, Stanley Warner became a party to the federal suit’s consent decree, and needed approval from federal court (and by extension the U.S. Dept. of Justice) for any venture into movie production, distribution or exhibition. That included any agreement with Cinerama Productions Corp., so it added yet another layer of negotiation. A tentative agreement for Stanley Warner to take over Cinerama theater operations was announced in May 1953, but there were a multitude of details to work out. Cinerama Productions’ licensing agreement with Cinerama Inc. ran only through 1956, so Stanley Warner wanted a two-year extension of that to help recoup their investment. They also wanted control of production and distribution as well as exhibition, to ensure a steady flow of pictures for the theaters. Meanwhile, Cinerama Productions was behind in payments to Cinerama Inc. for equipment, so Cinerama Inc. wanted at least something towards that before any talk about extending the license. And the Dept. of Justice had their own demands before they’d recommend court approval.

It took three months of intense dickering to sort this all out, with the clock ticking — if court approval wasn’t received by August 15, the whole deal was off. They finally made it with four days to spare, and the deal was this: For a little over $2.5 million, Stanley Warner essentially bought control of Cinerama Productions Corp. through 1958, adding yet another layer to the corporate tangle with its wholly-owned subsidiary Stanley Warner Cinerama. They would produce at least five Cinerama pictures but (the feds insisted) no more than 15. For each feature they could also produce a conventional 35mm version, but (again, per the feds) could not exhibit the 35mm versions in any of the Cinerama theaters. And — yet again, here was the hand of the U.S. Dept. of Justice — Stanley Warner could open no more than 24 Cinerama theaters in the United States. (So much for Dudley Roberts’s dream of a hundred theaters getting six to eight pictures a year.)

A month later, on September 16, 1953, The Robe premiered to respectful reviews and boffo box office. 20th Century Fox had three more CinemaScope pictures ready to go, MGM had one, and dozens more were in various states of production at one studio or another. Spyros Skouras’s gamble had paid off in a big way.

After that, things started getting complicated.