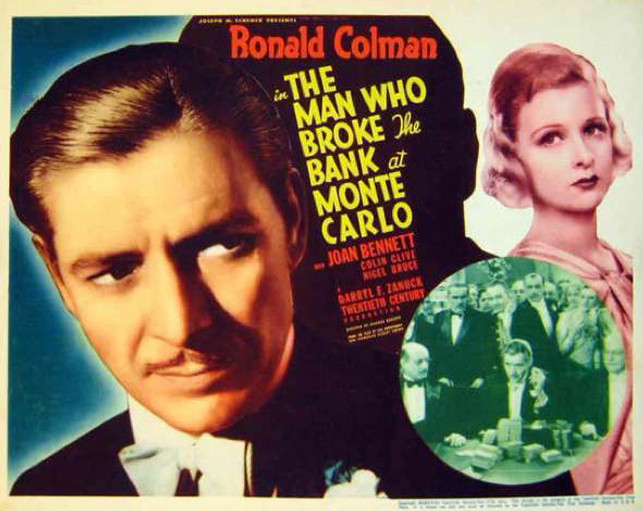 There was a certain amount of backstage drama this year as the 49th Annual Cinevent Classic Film Convention gathered in Columbus, Ohio over Memorial Day Weekend, and for a while it threatened to throw a bit of a monkey wrench into the program. But never mind, the drama resolved itself with a minimum of fuss and things proceeded more or less as planned.

The weekend started on Thursday with one of those well-made B pictures of the Classic Era that have long been a mainstay of Cinevent programs. This one was Chasing Danger, a 1939 Paramount starring Preston Foster as daredevil newsreel photographer Steve Mitchell (taking over from Brian Donlevy, who played Mitchell in 1938’s Sharpshooters), gallivanting across North Africa with Wally Vernon as his querulous sidekick Waldo Winkle. It was a breezy affair, clocking in at a lightning 60 minutes flat, one of only seven pictures directed by Latin Lover Ricardo Cortez. 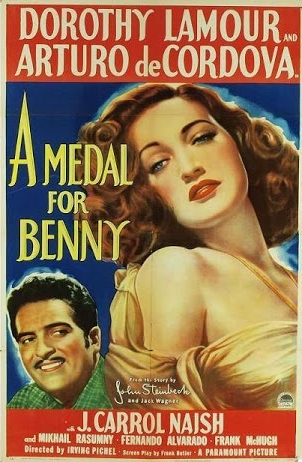 Next came another one from Paramount, A Medal for Benny (1945), a sweetly satirical look at a small California town when one of their own comes home a posthumous Medal of Honor winner during World War II. The good burghers of the town, led by the likes of Charles Dingle, Frank McHugh and Grant Mitchell, decide that deceased hero Benny Martin is just the thing to put their little one-horse village on the map. Except that Benny “Martin” was really Benny Martín (pronounced Mar-TEEN), and he was a bit of a ne’er-do-well from the “wrong” (i.e., “brown-skinned”) side of the tracks — and he enlisted in the Marines just a step ahead of the local sheriff. In Benny’s absence his betrothed Lolita (Dorothy Lamour) has yielded to the attentions of another (Arturo de Cordova) who is only marginally more upstanding than Benny himself — but now the new guy is shunted aside so Lolita can be held up as the grieving Girl Benny Left Behind. Bemused and befuddled by all the attention is Benny’s simple father Charley (J. Carroll Naish), suspended between pride and grief for his lost son and confusion at his sudden social prominence. Directed by Irving Pichel and written by Frank Butler and Jack Wagner (with a story assist from John Steinbeck, whose name got the project green-lighted), it’s all a sort of Preston Sturges Lite — which is ironic, considering that Sturges himself had been driven away from Paramount over a year earlier, mainly for insisting on making too many movies like A Medal for Benny.

Be that as it may, A Medal for Benny is very much in the Sturges mold, albeit by somewhat lesser talents. As this poster suggests, the emphasis in promoting the picture was on the romantic angle between Lamour and de Cordova. But the picture really belongs to J. Carroll Naish, who got a well-deserved Oscar nomination (he lost out to James Dunn for A Tree Grows in Brooklyn). Naish’s performance gives the movie a core of quiet dignity that enables it to rise above some rather dated Mexican-American stereotypes. 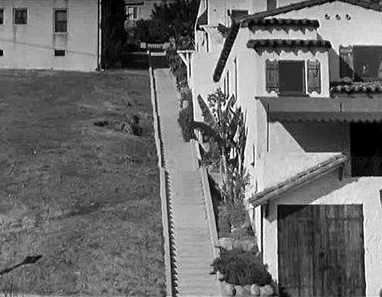 Just before the dinner break came Laurel and Hardy’s immortal The Music Box (1932), the one where the boys cart that crated piano up a flight of outdoor steps at 923 Vendome Street in Los Angeles (shown here as they looked in 1931 when the Oscar-winning short was filmed; the steps are still there, though the hillside has been built up and the steps are canopied over with backyard trees). This one hardly needs any introduction or comment, but I will say this: There are 139 of those steps, I know because I counted every one — and all I can say is the first 75 are easy. When you’ve gone from the foot of those steps at 923 to the top at 937 Vendome, you come away with a new respect for Oliver Hardy. As biographer John McCabe so aptly said, no actor ever worked harder for his paycheck.

Back from dinner and it was The Man Who Broke the Bank at Monte Carlo (1935), the lobby card for which leads off this post. Ronald Colman stars as an impoverished Russian prince, eking out a living as a taxi driver in post-World War I Paris. Scraping together a stake from a consortium of fellow émigrés, he wafts off to Monaco, where he performs the picture’s titular feat. Ah, but as they say, cherchez la femme — the femme in this case being Joan Bennett (age 25 and looking seven years younger). All ends well, if not wealthily, after a light and suavely frothy 64 minutes. As one veteran Cinevent-goer put it, “I like Ronnie Colman when he’s not being tragic.” 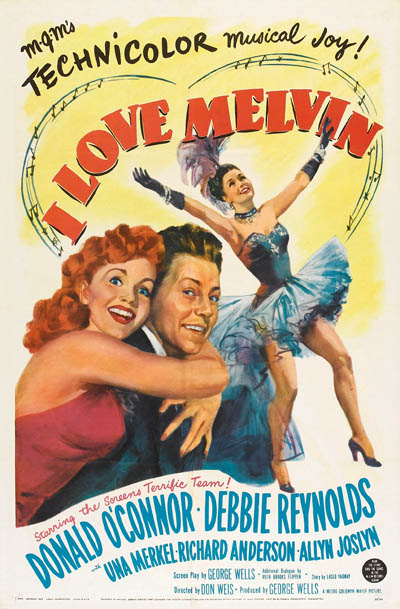 The highlight of Day 1, for me anyhow, was I Love Melvin (1953), in a delicious IB Technicolor print. It was, in a way, another cherchez la femme story; this time the femme was aspiring actress Debbie Reynolds, while the cherchez-er was Donald O’Connor as an apprentice photographer at Look Magazine who overplays his own importance as a way of getting to first base with Debbie. This was Donald and Debbie’s immediate follow-up to Singin’ in the Rain, and while I Love Melvin is certainly not in that league (how many movie musicals are?), it has a charm of its own. The songs by Josef Myrow and Mack Gordon may not boast any immortal standards, but they’re peppy and tuneful, and they give the stars the material they need to strut their stuff.

And seeing I Love Melvin prompted a thought that will probably get me drummed out of the ranks of Movie Musical Lovers Anonymous for flagrant heresy and unforgiveable lèse-majesté — but I’m going to go out on a limb and say it anyway.

With all due respect to Gene Kelly and his chin-jutting, arm-flinging dream ballets, he was never half the dancer Donald O’Connor was.

There. I said it. So shoot me. But the evidence is right on the screen, hidden in plain sight. You can even see it in Singin’ in the Rain, in the “Fit as a Fiddle” and “Moses Supposes” numbers, where Gene is positively huffing and puffing to keep up.

And if more evidence is needed (besides Donald’s Universal musicals with Peggy Ryan or Call Me Madam at Fox with Vera-Ellen), I Love Melvin has a clincher. Remember Gene’s dance on roller skates in It’s Always Fair Weather (1955)? Well, Donald did it first, and he did it better. The song is “Life Has Its Funny Little Ups and Downs”, sung by the scene-stealing Noreen Corcoran as Debbie’s kid sister:

The day wound up with Rogues’ Regiment (1948), a Universal-International film noir from director Robert Florey, starring Dick Powell as a US intelligence officer going undercover with the French Foreign Legion in Indochina (aka Vietnam) in an effort to track down a fugitive Nazi kingpin (Stephen McNally) who escaped from Berlin in the confusion of Germany’s collapse. I remember this one from years-ago TV; like many such, it’s been out of circulation for decades. It holds up nicely indeed.

I’ll pick up with Friday’s progam next time.