Highlights of the first day at Cinevent here in Columbus were: 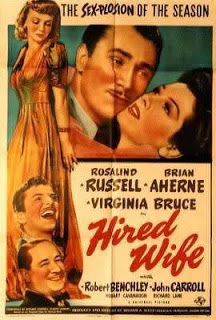 (1) Hired Wife (1940) Rosalind Russell plays a secretary in love with boss Brian Aherne, who doesn’t have the presence of mind to fully appreciate her. When he runs into tax trouble, she agrees to help out by marrying him — strictly on paper, you understand, just for business purposes. The inevitable comic complications ensue before the inevitable clinch at the fadeout. Writers Richard Connell and Gladys Lehman frost this cake with plenty of tasty dialogue, Brian Aherne never looked so lively and animated, and the actress was never born who could beat Rosalind Russell with a mouthful of good dialogue. And Roz, just coming off the breakthrough one-two punch of The Women and His Girl Friday, was sitting on top of the world, and you can see she knew it; and 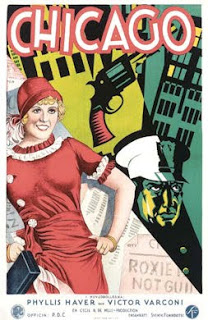 (2) Chicago (1927) This was the first (and silent) film treatment of the Maurine Watkins play that would serve as the source for 1940’s Roxie Hart with Ginger Rogers, and (of course) the Tony-and-Oscar-sweeping musical. Long feared lost, this version surfaced some years ago, and it’s a lively two hours. Phyllis Haver makes a Roxie Hart who can stand beside Ginger Rogers, Gwen Verdon and Renee Zellweger without hanging her peroxided head. (And I couldn’t help reflecting what a nice meal Marion Davies could have made of the role — but of course, Hearst wouldn’t have let her anywhere near it. Not in a thousand years.)

Now it’s back to the program, so if you’ll excuse me…