Back in 1970, in the reckless ardor of youth, I took it into my head to write a book about the making of the original King Kong. One Sunday night in January, I even went so far as to call Los Angeles and San Diego information to see if they had a listing for Merian C. Cooper. I was hardly surprised that they didn’t; someone like Mr. Cooper would surely have an unlisted number.

But I was surprised when I tried the name Marcel Delgado; information had a number for that name in Los Angeles. When I called, a soft, lightly accented, cultured-sounding voice answered.

“May I speak to Mr. Marcel Delgado?”

So there it was. I was talking to the man who built the models for the great Willis O’Brien, for the silent The Lost World and King Kong. (I didn’t think “the original King Kong” then, because this was 1970 and there were as yet no remakes to confuse the issue.) Hoping I didn’t sound as excited as I felt, I introduced myself, told him I was planning to write a book on the making of King Kong, and asked if he could tell me how to get in touch with Merian C. Cooper. 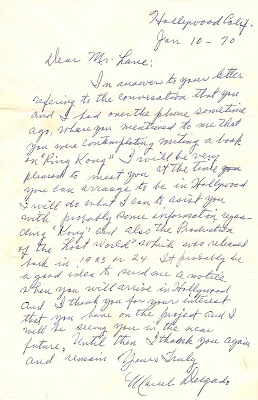 “Oh no, I haven’t seen Mr. Cooper for many years. I think he’s living down in Coronado these days.”

We didn’t talk much longer — it was, after all, fairly late on a Sunday night — but before I hung up I asked if I could feel free to get in touch with him again. “Yes, of course,” he said, “I’ll be happy to hear from you.”

I had also gotten his address from information, so I wrote him the next week and he answered very promptly (there’s his letter on the right), inviting me down to see him and asking only that I let him know when I was coming. I mentioned it to my college chum Bob Irvin: ” … and he said I could come down and visit him.” “Well, Jim,” said Bob, “Let’s go.” 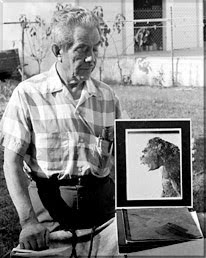 And we did. The following August, with our classes safely on hold for the summer, Bob, our friend Carol Cullens and I drove down to Southern California for the weekend, where we stayed with relatives of Bob’s. Mr. Delgado greeted us at his home at 1761 North Van Ness Avenue (don’t bother looking it up; the house — the whole block — is gone, subsumed into a TV studio at the corner of Van Ness and Sunset).

I didn’t take this picture, but it is from the same time period as our visit to his home, and this is exactly how I remember him looking that day. In fact, he may well be wearing the same shirt in this picture that he wore as he sat chatting with us in his living room that sultry August afternoon.

As a matter of fact, I didn’t take any pictures, because, ill-prepared upstart that I was, I hadn’t thought to bring along a camera. But I did think to bring along a tape recorder, and I recorded our conversation over the next two hours as he reminisced about his career in special effects; not all of the jobs he talked about are listed on his entry at the IMDB.

A few months ago I finally got around to having that old 6-inch reel-to-reel tape transferred to CD, and I’m in the process of transcribing our interview for posting here — soon, I trust.

Mr. Delgado had some keepsakes that he shared with us. Two old-style black-page photo albums filled with behind-the-scenes pictures. Or rather, copies of them; he had once lent the albums to someone who had copied all the pictures, then pasted the copies in the albums and mailed them back to him, keeping the originals. Mr. Delgado never got them back, and he never lent the albums out again.

I’d never seen any of these snapshots before, but many of them have been published online since (maybe even courtesy of the scumbag thief who stole them from Mr. Delgado in the first place), and here are a couple: 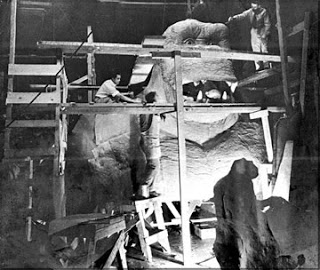 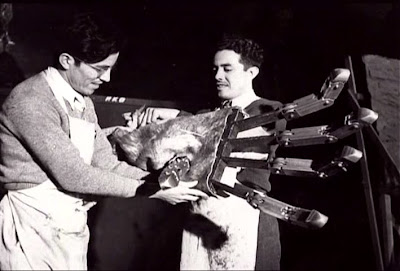 Delgado and his brother Victor (left) building the armature for Kong’s full-size hand. 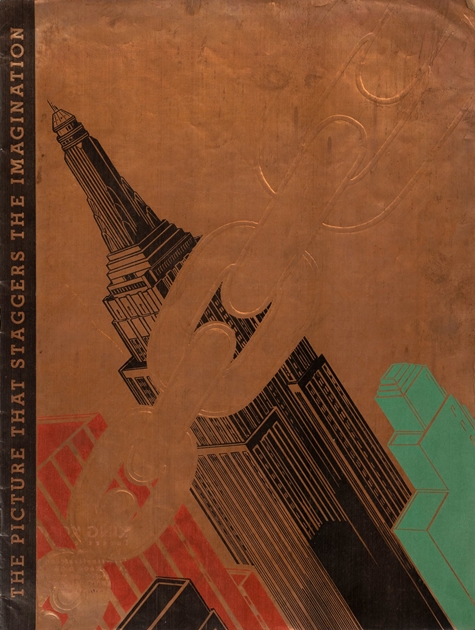 He also had the Holy Grail of movie souvenir programs, the only copy of it I’ve ever seen. Here, just to give you the idea, is a picture of the replica that was included in the deluxe collector’s DVD of Kong that came out in 2005, at the same time as Peter Jackson’s remake.

The real thing was 8½ x 11, and you couldn’t buy it at the theater. In fact, you couldn’t buy it at all; it was published as a supplement to The Hollywood Reporter on Monday, March 6, 1933, heralding the coming of Kong to Grauman’s Chinese Theatre on March 16. The front and back covers were paper-thin sheets of copper. (One of these programs was offered on eBay a few years ago. I bid it up to — well, I won’t say exactly how high, in case I ever get another chance at one; I wouldn’t want the seller to know how much I was willing to pay. Anyhow, I didn’t get it. And I wasn’t the second-highest bidder, either.) (UPDATE 4/27/22: Since then, in June 2021 in fact, another such program has been sold on Hake’s Auctions. I bid on that one too, and again I lost out — the final price was over $4,500 — but this time I didn’t exactly come away empty handed. I was able to download one of the images on the auction, and I’ve substituted that for the one I originally published on this post, of the replica in the 2005 Collector’s Edition DVD. So this is no longer a reproduction of a replica, it’s the real McCoy. Other images can be found — as of this writing, anyhow — at the link.)

I never did write that book about King Kong. I was foolish to think I ever could; I had neither the time, the resources, nor the experience for such a project in those days. By the time I might have been able to tackle it, it had already been done. Twice: in The Making of King Kong by Orville Goldner and George E. Turner (1975, revised and expanded and edited 2018 by Michael H. Price); and (even better) The Girl in the Hairy Paw, edited by Ronald Gottesman and Harry Geduld. (UPDATE 4/27/22: And now there’s a third: King Kong: The History of a Movie Icon from Fay Wray to Peter Jackson by Ray Morton.)

Now it’s back to plugging away on that transcript, so I can give you Marcel Delgado in his own words, opening his home, his memories and his scrapbooks to this callow young intruder from Sacramento.