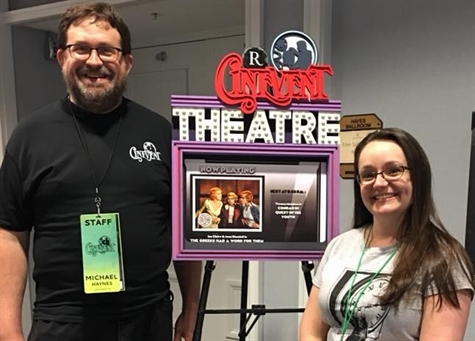 Cinevent, the venerable classic film convention that was a longtime fixture on Memorial Day Weekend in Columbus, Ohio, convened belatedly for the 52nd time October 28-31 this year. It was doubly belated, in fact — postponed from 2020 to 2021 by the COVID lockdown, then from May to October just to be on the safe side. Then this damned Delta Variant came along and seemed to threaten even that — but with vaccinations strongly encouraged and masks mandatory, the convention proceed as (re)scheduled.

So where are the masks in this picture, you ask? Those are still in the future; the pic is from Cinevent 51 in 2019, when Cinevent chair Michael Haynes (left) and Dealers’ Room coordinator Samantha Glasser announced that Cinevent 52 (expected, naturally, to be in 2020) would be the last. Cinevent’s founders were all gone. John Baker, much the oldest of the three, was the first to go, after a long retirement in Florida; then John Stingley died in 2007 at 59; Michael’s father Steven, the last survivor, passed away in April 2015 as Cinevent 47 was gearing up. Now, in 2019, Michael and his mother Barbara decided it was time to step down from active participation, retire the Cinevent name, and pass the torch if anyone cared to carry it forward.

Fortunately, Samantha did, along with a significant cadre of Cinevent’s dedicated staff. In 2019 they were seeking suggestions for a new name; now they have one: The Columbus Moving Picture Show (CMPS). And so it is that The Classic Film Convention Formerly Known as Cinevent will go forward under that name, and will return to Memorial Day Weekend — only seven months away. 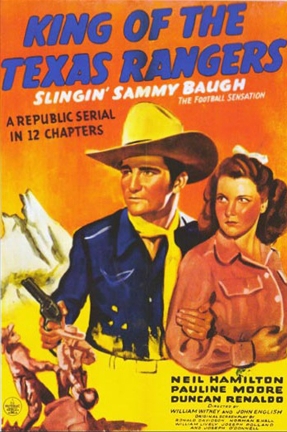 In the meantime, CMPS served as co-presenter of Cinevent 52, so let’s have a look at the program for this final year.

One feature of this and the two previous Cinevents that I hope CMPS will continue is the practice of scheduling a 12-chapter serial throughout the weekend, screening three chapters on each of the four mornings. This tradition-in-the-making began at Cinevent 50 with The Masked Marvel (1943), a spirited Republic actioner about fighting home-front saboteurs during World War II. In its day it was upstaged by “the Masked Marvel murder“, the bizarre unsolved killing of one of its leading players weeks before the first chapter hit theaters; today the murder is a forgotten footnote, while the serial remains good fun. In 2019 Cinevent presented Hawk of the Wilderness, a bizarre mash-up of Tarzan of the Apes, The Last of the Mohicans, Treasure Island and The Last Days of Pompeii that I’m told has a good rep among serial aficionados, but which I could never get behind.

This year brought King of the Texas Rangers (1941) (like its predecessors, from the…er, “economical” Republic Pictures factory). The star was pro football’s Sammy Baugh (dubbed “Slingin’ Sammy” by sportswriters and Republic publicists; Baugh himself preferred plain “Sam”) as “Smashin’ Tom” King, likewise a pro footballer (the kind who boldly goes for a first down on fourth-and-eight — and makes it). When Tom’s Texas Ranger father is killed while investigating sinister foreign sabotage in Texas, Tom puts his gridiron career on hold while he enlists in the Rangers and picks up where Dad left off. (America not yet being involved in World War II, the culprits are not specifically identified as they cruise around in their zeppelin plotting mischief, but their stiff-arm salutes and Teutonic accents leave no doubt about what nationality they’re supposed to be.)

Sammy Baugh’s own pro career didn’t have to wait; King of the Texas Rangers was filmed during his off-season (he played for the Washington Redskins from 1937 to ’52). As an actor, Baugh was no threat to Fredric March or Spencer Tracy, but he was up to the modest demands of a Republic serial hero right enough, and having been raised on a Texas farm, he was as good a horseman as any stuntman on the lot.

Besides, he was buoyed by a good supporting cast. Neil Hamilton, playing a quisling saboteur, had started in the 1920s as a leading man for D.W. Griffith; by 1941 his star had dimmed somewhat (he was best remembered as the luckless wimp who lost Maureen O’Sullivan to Johnny Weismuller in MGM’s first two Tarzan pictures), but he was still soldiering on in the trenches, as he would continue to do through the end of the 1960s; later generations would know him as Commissioner Gordon to Adam West’s Batman. Duncan Renaldo (still ten years from his signature gig as TV’s Cisco Kid) played a Mexican federale on assignment north of the border, serving as Baugh’s cheerful sidekick. And Pauline Moore, as a plucky Lois Lane-style newspaper reporter, contributed as much as mere “girls” were allowed to do in Republic serials. Toss in the usual contingent of two-fisted gun-toting henchmen from the studio’s stable of stuntmen, and breakneck direction from William Witney and John English, and the recipe was complete. 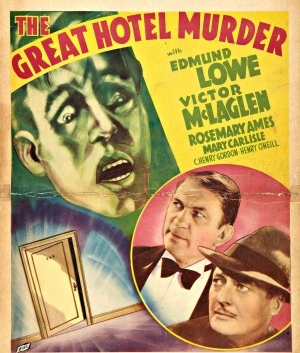 After the first three chapters of King, it was time to bring on the features. The Great Hotel Murder  (1935) was the sixth re-teaming of Edmund Lowe and Victor McLaglen as dueling frenemies, after their 1926 hit What Price Glory as Marine Corps Sgt. Quirt (Lowe) and Captain Flagg (McLaglen). Some of those re-teamings were straight Quirt/Flagg sequels, with the boys battling over some female or other; others, like this one, varied the formula a bit. Here Lowe played a famous mystery novelist horning in on house detective McLaglen’s investigation of a murder at a medical convention meeting in the hotel where McLaglen works and Lowe lives. This time it’s not a woman they’re fighting over, but bragging rights for solving the murder. It was a fun banter-fest and a pretty clever mystery, albeit with an abrupt and confusing climax (Dave Domagala’s program notes alluded to some maladroit pre-release editing that mucked things up).

The weekend’s first silent was 1928’s The Michigan Kid, from a novel by Rex Beach. Conrad Nagel played a gambling-house owner in the Alaska Gold Rush of the 1890s, with Renee Adoree as the childhood sweetheart he hopes to marry. Beautiful scenery and an impressive forest fire climax bolstered the film. Then it was Welcome Home (1935), a complicated sting operation (and who isn’t a sucker for those?) with con-artist James Dunn returning to his home town for a chamber of commerce reunion, then discovering that one of his partners in crime (Raymond Walburn) has swindled the town fathers in a stock scam. Getting the money back before the game is discovered, plus inducing a New York tycoon to invest in the local economy, made up the bulk of the picture’s 73 minutes. Arline Judge, Rosina Lawrence, William Frawley and Charles Sellon rounded out the cast. 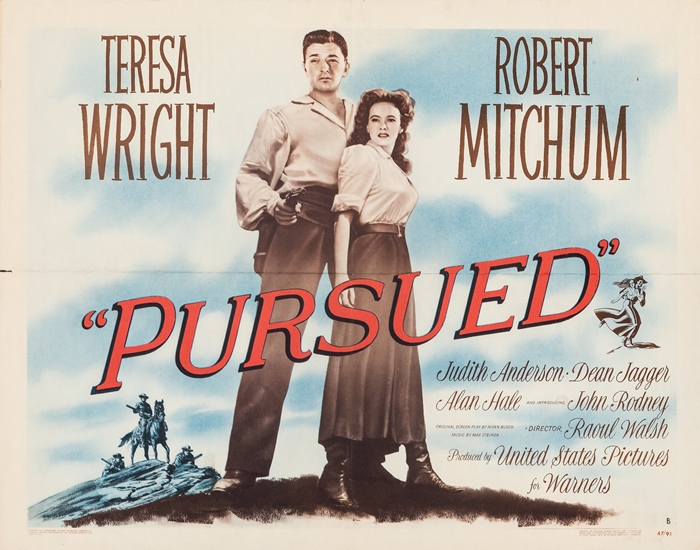 After the dinner break came the highlight of the day and one of the highlights of the whole weekend. This was Pursued (1947), a moody, genre-bending melodrama from Warner Bros., director Raoul Walsh and writer Niven Busch. On the surface Pursued is a western, but with enough elements of film noir to bolster those who maintain that noir is less a genre than a style. On top of the western/noir mix, there’s a soupçon of Wuthering Heights‘s Cathy/Heathcliff/Hindley triangle of sexual obsession and sibling rivalry, and even a few threads of Moby Dick in the obsessive, vendetta-driven character played by Dean Jagger.

The story opens in the New Mexico Territory in the 1880s. Eleven-year-old Jeb Rand survives the massacre of his family by cowering in the cellar of their cabin, seeing only confusing glimpses of the slaughter that will haunt his nightmares well into adulthood. He is discovered in the aftermath by the widow Callum (Judith Anderson), a neighboring rancher who takes him home and raises him as a foster son. Years later, he has grown into Robert Mitchum, in love with his foster sister Thor Callum (Teresa Wright), loathed and resented by her brother Adam (John Rodney), and still haunted by those nightmares. Lurking on the edges of his life is Widow Callum’s brother Grant (Dean Jagger), waiting impatiently for the day he can bring about Jeb’s death, either personally or by manipulating the resentments of others. In service to Grant’s malignant hatred a number of bystanders, even an innocent pony, are made to bite the dust.

The torrid, borderline-incestuous passion between Jeb and Thor is the fraught focus of Pursued. Writer Niven Busch was no stranger to sexual ferment, whether in a western (Duel in the Sun) or a film noir (The Postman Always Rings Twice, 1946), and if Pursued doesn’t quite have the lurid, panting carnality of those challenges to the Production Code, it still has an adult-content edge that makes it something more than a family-feud shoot-’em-up. By the time just deserts got meted out, the Cinevent audience was keyed up enough to burst into applause well before the final credits.

After that, we all unwound with Helpmates (1932), one of Laurel and Hardy’s best shorts, in which The Boys frantically try to straighten up Ollie’s house after a wild party and before the shrewish Mrs. Hardy (Blanche Payson) gets home from her visit to Mother. Then came The Clinging Vine (1926), a silent romantic comedy in which Leatrice Joy (with her gender-bending signature male haircut) plays a career-driven business executive who takes lessons in femininity from her prospective grandmother-in-law to help her win the boss’s son (Tom Moore) by making him think he’s the brainy one. 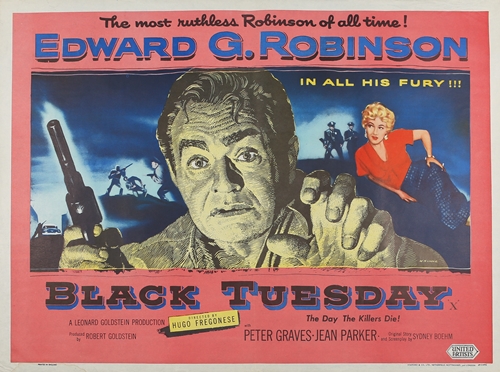 Then, just like that, it was back to melodrama for Black Tuesday (1954), with Edward G. Robinson leading a daring prison break — from Death Row, no less — along with girlfriend Jean Parker and fellow condemned killer Peter Graves; before they can make a clean getaway with Graves’s $200,000 in stashed loot, the exploit degenerates into a hostage situation on the top floor of a warehouse. The lobby card here promises “The most ruthless Robinson of all time!” — and by golly, that’s not far off the truth. His Vincent Canelli makes Little Caesar and Key Largo‘s Johnny Rocco look like Southern Baptist deacons. “Some people have youth, some have beauty,” Robinson once famously said, “I have menace.” In Black Tuesday Robinson is at his menacing-est. Sidney Boehm’s script is peppered with indictments of capital punishment, but Robinson’s Canelli undercuts them: Nothing but cyanide pellets, a bullet in the head, or 25,000 volts will do for this vicious beast. Screenings of Black Tuesday are evidently rare, due (it is said) to a complicated copyright arrangement that’s more trouble to work out than it’s worth. Too bad; it’s a tight, grueling 80 minutes (thanks to director Hugo Fregonese), with Robinson at his late-career best heading a cast that includes Milburn Stone, Warren Stevens, Jack Kelly, James Bell, Russell Johnson and Frank Ferguson.

And that closed out the first day of the last Cinevent. More was to come.