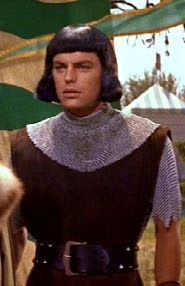 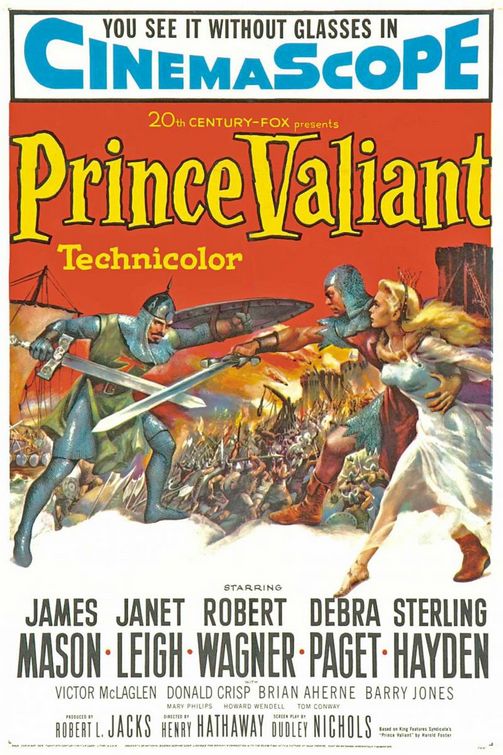 In my last post on Henry Hathaway, I wrote about Down to the Sea in Ships (1949). For this one, I’m going pretty much from the sublime to the ridiculous. There is much that is ridiculous about Prince Valiant (1954), but it’s also ridiculously good fun — and not only for wiseacres out for a campy laugh.
Now here I have to sigh deeply, grit my teeth, and admit that we might as well get the most ridiculous element of Prince Valiant out of the way right off the bat. It’s easily identifiable and it has a name: Robert Wagner. In his 2008 autobiography Pieces of My Heart (written with Scott Eyman), Wagner admitted he was miscast as Hal Foster’s comic strip prince, and he spoke of the picture with chagrin:
“I was happy to be working for director Henry Hathaway; I thought the picture was good, and I loved the romance of the subject matter. I was working with James Mason, another one of my favorite actors, and I thought I was sensational. I had no idea it would become for me what ‘Yonda lies the castle of my fadduh’ was for Tony Curtis.”

Wagner said that mainly, it was the wig (in fact, that’s the title of the chapter in which he discusses it), and as you can see from the picture above, he has a point. Pauline Kael once said that no actor can triumph over a bad toupee; she was talking about Walter Matthau in The Laughing Policeman, but she might well have been thinking of Robert Wagner in Prince Valiant. Wagner claims that Dean Martin visited the set one day and spent ten minutes talking to him before he realized he wasn’t Jane Wyman. Wagner himself thought the wig made him look like Louise Brooks; to me he looks more like Archie’s girlfriend Veronica. In any case, the wig is a performance-killer, no error. I doubt if Richard Burton — another young actor under contract to 20th Century Fox at the time, and one who might have made a good Valiant himself — could have made it work.

But Wagner can’t hang it all on the wig. Whatever his tonsorial accoutrement, his callow performance is more fitting to a Malibu beach boy than a Viking prince. There’s no dialogue coach credited on Prince Valiant; maybe the picture didn’t have one. But somebody should have pointed out to young RJ that the first name of Uther Pendragon is not pronounced “Youther”; nor “betrothed”, “betrawthed”; nor “Gawain”, “Gwayne”. And somebody should have ironed the California twang out of line readings like “Aw, c’mon, don’t be shy.”

It must be said that in every case, that somebody should have been Henry Hathaway.

Wagner’s rise at 20th Century Fox hadn’t exactly been meteoric, but it had been pretty swift: eleven pictures in just over three years. He was earnest and hardworking, but not a natural for a role like this; he had neither the effortless panache of Errol Flynn nor the graceful aplomb of Tyrone Power. He was certainly nowhere near the seasoned performer he would become in time (and remains today). But you can’t say he wasn’t game; thrust by Darryl F. Zanuck into the title role of a comic strip he’d loved as a kid, he dove into it with all the relish his then-limited resources could command. It was a mercy (to him then, to us now) that he didn’t overhear the wisecracks of the crew until his work on the picture was done, so his enthusiasm at least remains high on screen and never flags. An actor, when he’s lucky, gets his in-over-his-head performances out of the way in high school, college or amateur theater, then leaves them behind. It’s Wagner’s bad luck that he had to stumble like this in full view of the world. In CinemaScope and Technicolor. 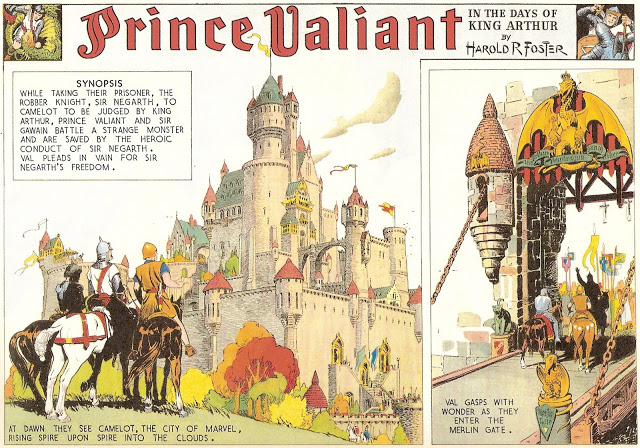 So let us stipulate that Prince Valiant is mushy at the center, and grant that it’s not easy to watch without wincing in sympathy for a young hero who seems to be floundering in Daddy’s oversize suit of chain mail. The picture still has its pleasures, especially for those who discover it in uncritical childhood — the age at which a couple of generations of kids discovered Harold Foster’s comic strip.

There is, for example, an honorable — and largely successful — effort to duplicate Foster’s richly detailed visual style. Compare this illustration of Foster’s from the first year (1937) of the strip, as Sir Gawain and Valiant approach King Arthur’s Camelot…

…with this view from the movie. That’s Sir Gawain and Val again in the foreground (though the plot differs from Foster’s), and the image is courtesy of Hathaway, cinematographers Lucien Ballard and Charles G. Clarke, art directors Lyle Wheeler and Mark-Lee Kirk, and special effects ace Ray Kellogg. 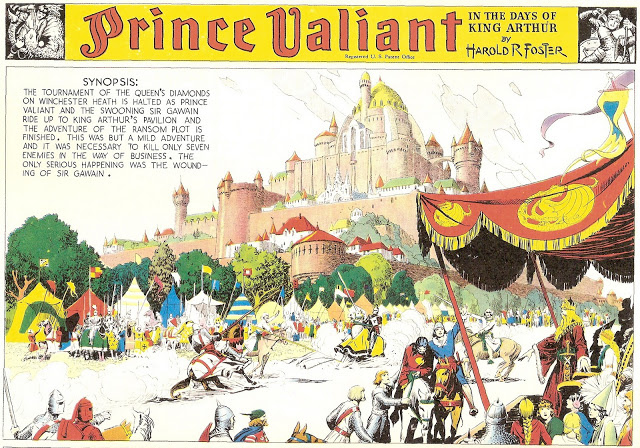 Here’s another Foster illustration from 1937, of a festive tournament day under the walls of Camelot…
…and once again, here’s a similar scene from the movie, with Foster’s picture divided into two shots, one of the field of play:

…and another of the knights’ colorful pavilions: 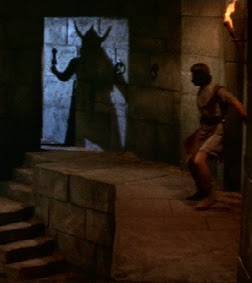 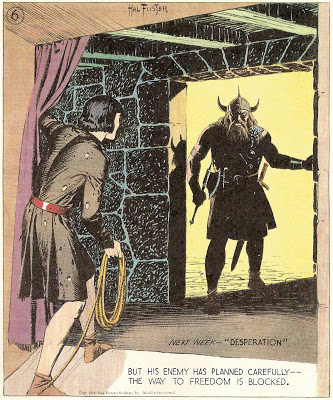 And here’s a comparison I particularly like. On the left the strip, on the right the movie. As with the examples above, the context of the shot  in Dudley Nichols’ script differs completely from what Foster wrote in the strip, yet it’s clear to see that Foster’s dramatic design and pictorial sense were carefully studied and, wherever possible, emulated in the movie.

In Prince Valiant‘s last half-hour Hathaway — and even Wagner — rise to the occasion, and the picture becomes all a bloodthirsty young fan of the comic strip could wish for. First there’s a hell-for-leather battle between the forces of Valiant’s father King Aguar (Donald Crisp) and those of the usurper Sligon (Primo Carnera), with work by stunt coordinator Richard Talmadge that’s still remarkable to see:

Remember, this was in the days before computer-generated images, and if you wanted fire in your battle scene there was nothing for it but to light the flames…

…and let the stunt men (David Sharpe and Buddy Van Horn, among others) deal with them.
Finally, even if you’ve been jeering and groaning and rolling your eyes all through the picture, the last ten minutes will amply reward your put-upon patience. That’s when Valiant at last squares off against the traitorous knight Sir Brack (James Mason — and that’s no spoiler; if you can’t figure out within the first twenty minutes that Sir Brack is the mysterious Black Knight terrorizing the countryside, you’re not paying attention). The climactic duel to the death, superbly choreographed by Jean Heremans, is a real pip:

For once there’s not the wiry swish and chitter of fencing foils or sabers, but the amazing whang! clang! bar-r-r-rang! of steel broadswords wielded in great, murderous arcing blows…

…with Wagner and Mason (if there was any doubling it isn’t obvious) ranging across the great hall of Camelot in a no-holds-barred free-for-all, over, around and through the Round Table itself…

…and Franz Waxman’s virile, heroic score (one of his best) coming in at exactly the right moment, as Prince Valiant’s magical Singing Sword takes up its song on the side of right and honor. It’s 2 minutes 52 seconds from the first stroke until the villain falls dead, and it’s one of the most exhilarating swordfights ever committed to film.

Reviews for Prince Valiant weren’t particularly generous, but the reviews and Robert Wagner’s wig notwithstanding, the picture did well at the box office. (Wagner, for his part, counted his blessings and resolved never to get stuck in a role like that again.) Of the movies I’ve covered so far in my retrospective posts on Henry Hathaway, this is admittedly the least of them. It’s not historically important like The Trail of the Lonesome Pine, nor a neglected masterpiece like Down to the Sea in Ships, but it’s unpretentious fun in a Boy’s Own Adventure way. Harold Foster’s strip was 16 years old when the picture went into production (it still runs every Sunday in about 300 papers, 74 years after Foster, who died in 1982, created it), so the first generation of Valiant’s fans had kids of their own to take to see the movie.

Dudley Nichols’ script jettisons the episodic plot of the strip (which most of its fans wouldn’t remember anyway, having few reprints to refer to) in favor of a simple story incorporating visual and dramatic elements that the fans would remember and respond to. At the midway point there’s a lavish recreation of a jousting tournament in the Age of Chivalry, with some fine equestrian stunt work. And capping it all off is a rousing final half-hour that redeems much of what has gone before.

I’ll let Harold Foster himself have the last word on the picture, from an interview he gave in 1969. It had been 15 years since the movie’s release, and there was no reason for him not to be honest about it. His appraisal of the CinemaScope version of his brainchild was clear-eyed and evenhanded:

“It was a magnificent film — the scenery, the castles, everything was beautiful. They used all my research: Sir Gawain had the right emblem on his shield, everything was right. But somehow, the story was a little bit childish…it was Hollywood.

“I thought [Robert] Wagner was a little bit immature — his face was immature, he ran around with his mouth open. But all in all I got a kick out of it; it was quite an experience.”