Continuing with London After Midnight by Marie Coolidge-Rask:

Chapter 10 – A Question of Vampires

The howling of the dog, coming from the direction of Balfour House, continues as Sir James and Yates make their way home from the crypt. They recount their experience to Hibbs, and the three discuss aspects of vampire lore as written in Colonel Yates’s book. Since murdered men and suicides are supposedly liable to become vampires, and since Roger Balfour’s coffin was still undisturbed at the time of Harry’s interment, it is cautiously suggested that the son’s unsolved murder may have had some supernatural effect on Roger Balfour’s restless soul. Sir James is clearly rattled by the night’s experience; Hibbs and Yates realize that there is some unknown factor at work over in Balfour House, and the mystery seems to deepen with every new event. It is near dawn when Sir James and Colonel Yates go to bed. Hibbs steals back downstairs to the library for further study of Colonel Yates’s book.

All three men rise late the next day, leaving Lucy feeling quite lonely in the house, oppressed in the heat that has been intensified, rather than dispelled, by the early-morning electrical storm. At dinner that evening, conversation is kept trivial; by tacit agreement among the three men, Lucy is given no hint of what happened the night before.

Later that night, after Lucy has gone to her room, the three men resume their discussion of the night before. Suddenly they hear a piercing scream from upstairs, in the direction of Lucy’s room. Rushing upstairs, they find Lucy’s door locked. They try to break down the door, but before they have to, the door opens. In the room they find Smithson, the maid, trembling and sobbing, her eyes wide with fear, two small wounds at her throat, similar to the ones seen on the body of Harry Balfour. Sobbing, she tells the men that Lucy is locked in her dressing room, and they release the confused and frightened young lady from her confinement. 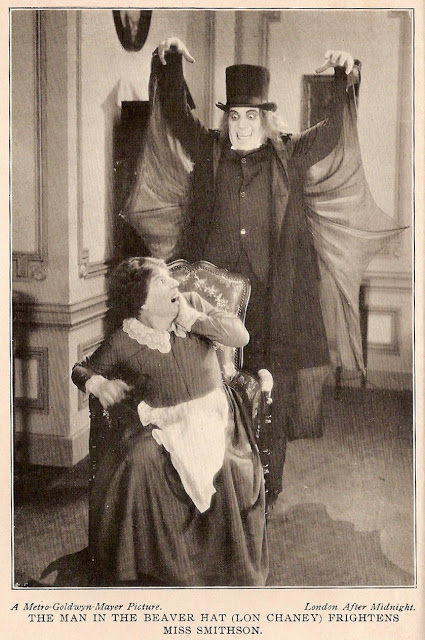 Finally, Smithson pulls herself together and tells
the men what happened. As Miss Lucy was
getting ready for bed, she says, she left her
to fetch some towels from the linen closet.
In the hallway she saw the man in the beaver
hat, the one she saw on the steps of Balfour
House as she was passing the night before.
The man was stooped over and creeping
toward her, his skeletal hand outstretched,
his spiky teeth gleaming. Smithson was too
frightened even to scream.

Thinking of Miss Lucy, Smithson says, she
rushed back to the young lady’s room,
shoved Lucy into the dressing room and
locked her in. Then she locked the door to
the outer room and thought they were safe.
But before her horrified eyes, a green mist
streamed through the keyhole and formed
itself into the man in the beaver hat. The
man came to her; she was unable to speak
or scream, or even move. She felt him
bending over her, felt his teeth on his throat.
That must have been when she screamed,
she says, but she doesn’t remember it.
She knew nothing more until she heard
Sir James, Colonel Yates and Hibbs
pounding at the still-locked door.

Lucy, greatly excited, calls their attention
to the window, where all of them see
the man in the beaver hat skulking
across the grounds in the direction
of Balfour House. Colonel Yates tells
Hibbs to remain with Lucy and see
that she is not left alone; he and
Sir James will investigate the matter
further.

Left alone with Lucy and Hibbs, Smithson realizes that the two young people (whose feelings for each other have not escaped her notice) wish to be alone, so she tells them she is going down to the kitchen; after her experience she could use a nice cup of hot tea. Downstairs she finds the servants — butler, housekeeper, cook, maids and footmen — cowering in the kitchen, wondering about all the commotion earlier but afraid to go and see what it was. They mill around her, clamoring for news. Deciding she could use something a little stronger than tea, Smithson asks Billings, the butler, for “a little drop of spirits.” Thus fortified, she proceeds to regale the servants with another recounting of her experience in Lucy’s room, this one much embellished for dramatic effect as Smithson relishes the attentions of her rapt and horrified audience. At this inopportune moment, a cat knocks over a tin pan from the sink onto the floor; the sudden clatter sends the servants into an uproar. Upstairs, Lucy and Hibbs hear the melee downstairs and wonder what can possibly happen next.

Chapter 13 – The Woman on the Ceiling

Colonel Yates and Sir James make their way to Balfour House, proceeding slowly by a roundabout route, pausing frequently to watch and listen for prowlers or anything untoward. Once again Sir James’s heart is racing, and once again he depends entirely on the resoluteness of Colonel Yates to keep him going.

It is well after midnight when they approach Balfour House. The house is dark, but they can see a faint light glimmering from one of the upper windows — in fact from the “secret chamber” that has been unoccupied for centuries, the one in which a woman’s ghost is said to roam. Slowly forcing their way through the tangled grass and foliage of the overgrown grounds, they find a large tree from which they should be able to see into the lighted chamber. Taking the lead as usual, Yates climbs into the tree. At that moment they hear, low but clearly audible, the insistent sobbing of a woman in despair.

Through the high windows of the secret room they can see only the ceiling and the upper walls inside. There they behold a sight that confounds them. By the dim light inside, they see a mysterious shape in the secret room — now sharp and clear, now blurry and indistinct, now rising to the ceiling, now swooping below the level of the windows, now contracting, now expanding as if carried by huge bat-like wings. At one point the apparition turns its head to the light, and the two men clearly see the profile of a woman — a woman hovering and swooping high in the secret room on the wings of a bat! 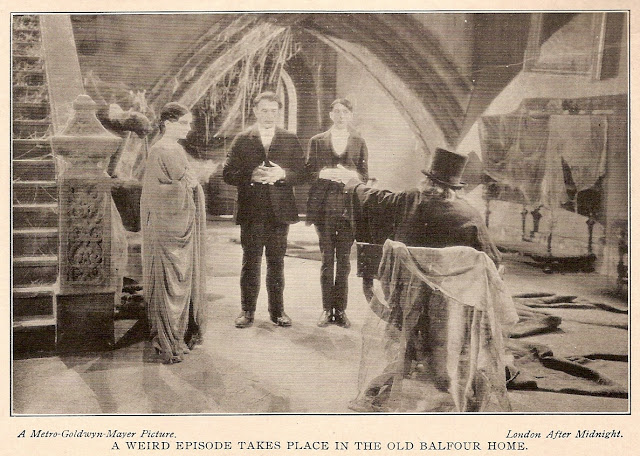 Upon being awakened, Hibbs apologizes for his rudeness in dropping off. Don’t mention it, says Yates; on the contrary, I apologize for keeping you up so late. Yates leaves Hibbs in the study, telling him they both should be in bed.

Hibbs looks at his watch. Two-thirty! Have they really been talking so long? He hardly remembers a word they said. Before retiring, he decides to check on Lucy’s room. He is horrified to find the protecting sword missing. He pounds on the door, calling her name.
Sir James appears, alarmed at Hibbs’s display — and outraged that he addresses Lucy by her first name. Colonel Yates joins them and they break in the door to Lucy’s room. It’s empty. She’s gone.

Finally the strain of the past few days has its way, and something in Hibbs snaps. He becomes hysterical, babbling that “vampyrs” have taken Lucy, that they must all be destroyed. Colonel Yates tries to calm him, to no avail. As Hibbs runs off, delirious, there comes from the direction of Balfour House the wild, piercing scream of a woman in distress. Could that have been Lucy?