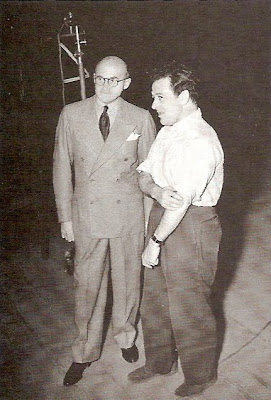 Joel McCrea’s little ploy turned out to be a pretty momentous backfire. In 1935 he was under contract to Samuel Goldwyn, the irascible producer who had gone independent, largely because no other mogul in the picture business could stand to work with him.

McCrea knew that the boss was looking for an actress to add to his small stable of stars — a Bette Davis, a Katharine Hepburn, somebody with “that little something extra” — and McCrea thought he had just the woman for him: his wife, Frances Dee. She had already appeard in over thirty pictures, including RKO’s Little Women (playing Meg) and Of Human Bondage, and McCrea had been pitching her to Goldwyn for months without success. Now he took the bull by the horns: he showed up at the studio with a print of Dee’s latest picture for Fox, a Cinderella story called The Gay Deception, and screened it for Goldwyn.

Goldwyn loved the picture, but for the wrong reason as far as McCrea was concerned; when the lights came up, he was no more interested in Frances Dee than he had been the day before. Instead, he turned to McCrea. “Who directed this?”

What was it about The Gay Deception — a frothy comedy about a small-town secretary who uses a $5,000 sweepstakes prize to pose as an heiress at the Waldorf, where she meets a prince incognito as a bellboy — that convinced Goldwyn he’d found the director he was looking for? Jan Herman doesn’t say in A Talent for Trouble, nor does A. Scott Berg in his magisterial Goldwyn — and Berg had unrestricted access to Goldwyn’s archives, so maybe Goldwyn never said either. That kind of question is just what makes Sam Goldwyn such an enigma. How do we figure this guy out?

If Goldwyn was nothing more than a crass and ill-tempered parvenu who threw money around in an effort to buy a reputation as a class act, all the time raging and bullying and mangling the English language, how do we explain this mind-boggling flash of insight that changed his life, and Wyler’s — and left no small ripple in Hollywood history? For whatever reason, he decided the director of this lighthearted romantic comedy was just the man he wanted to direct a searing drama about two schoolteachers accused of lesbianism.

When the two men met later that summer of 1935, Wyler said Goldwyn “couldn’t have been more charming, but I thought he’d lost his mind. He wanted to film The Children’s Hour.” Lillian Hellman’s play was a scandalous success on Broadway, and the Hays Office had tried to warn Goldwyn off bringing it to the screen. But Hellman maintained that the play was about the power of a lie, not lesbianism; Goldwyn was going to give her the chance to prove it by hiring her to write the screenplay, and he wanted Wyler at the helm.

The result was These Three; the Hays Office allowed Goldwyn to proceed only if he removed any suggestion of “sex perversion” and didn’t make any reference to Hellman’s original title on screen or in any of the picture’s publicity. Hellman proved her point by changing the schoolgirl’s lie to a more conventional accusation of illicit heterosexuality. And Wyler proved it again 26 years later, by default: he remade the movie under its original title and — the Production Code having loosened up in the meantime — with its original lesbian theme intact. That time, Hellman wasn’t available to do the script, and she hated the final film. Wyler himself wished he had never made The Children’s Hour. 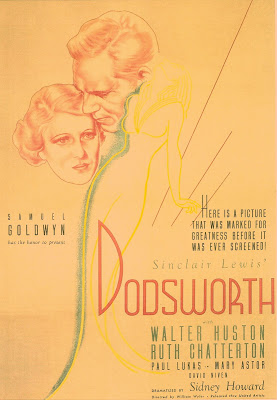 Not so These Three, which even in 1962 outshone its remake, and in 1936 was exactly the succes d’estime Goldwyn was looking for, and a box-office hit to boot. Their next picture together, Dodsworth, from Sinclair Lewis’s novel and Sidney Howard’s play, brought Goldwyn within striking distance of his Holy Grail: the Academy Award for best picture. It was nominated for that and six others (including Wyler for best director), although only Richard Day’s art direction won. But Goldwyn had found the director who could give him the prestige pictures he wanted sent out under his name. Wyler, for his part, found a producer entirely unlike Junior Laemmle back at Universal, one willing to spend the money to support the style that in time would dub him “90-Take Wyler.”

It was a professional marriage made in heaven — with plenty of hell along the way. There was a reason Goldwyn was called Hollywood’s lone wolf: he fought with everybody — with Edgar Selwyn, his first partner in movies; with United Artists, the distributor of his pictures; with A.H. Giannini, UA’s banker; with his stars, directors, lawyers. Everybody.

For his part, Goldwyn complained that Wyler shot as if he owned stock in a film company. Part of the reason for all this is the fact that they were so much alike. They were both inarticulate, though each handled it in different ways. Goldwyn blustered and railed, shaking his fist at the top of his voice. Wyler didn’t; he just quietly ordered another take, saying little. Neither man could tell people exactly what he wanted, but each knew it when he finally saw it. In Goldwyn A. Scott Berg quotes Ben Hecht on the producer:

Ben Hecht wrote that Goldwyn as a collaborator was inarticulate but stimulating, that he “filled the room with wonderful panic and beat at your mind like a man in front of a slot machine, shaking it for a jackpot.”

“Inarticulate but stimulating” describes Wyler as well as it does Goldwyn. If Goldwyn filled a room with wonderful panic, Wyler filled it with equally wonderful desperation. Staying with Hecht’s metaphor, if Goldwyn shook that slot machine for a jackpot, Wyler stood there dropping coin after coin into it, figuring that sooner or later the lemons and cherries and bananas would line up the way he liked them. And during the years from 1936 to 1946, when Wyler made the pictures that would secure his reputation as a man who couldn’t make a flop, most of the coins he used belonged to Sam Goldwyn. 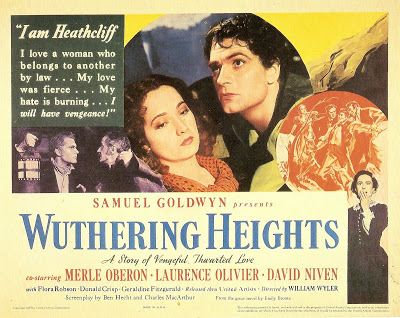 One of Wyler’s jackpots, and Goldwyn’s, was also Hecht’s — his and Charles MacArthur’s. The two had written an adaption of Emily Bronte’s Wuthering Heights while on vacation in 1936, just on spec. They sold it to Walter Wanger for Wanger’s star Sylvia Sidney. But those two got into a screaming match over another picture, and when Wanger grumbled that the script needed “laughs,” the writers asked Goldwyn to buy the property from him.

Goldwyn wasn’t interested; the atmosphere was too grim and the flashback structure confused him. But when Wyler — stretching the truth a bit — told him Jack Warner was considering buying Wuthering Heights for Bette Davis, Goldwyn couldn’t resist the idea of stealing it out from under him. By the time the picture premiered in April 1939, the movie Goldwyn hadn’t been all that interested in making had been transformed in his mind into the one he thought he’d be remembered for (although he never did get the title right; he always called it “Withering Heights”). He’d been practically conned into making the picture, but whenever anyone mentioned “William Wyler’s Wuthering Heights,” he’d correct them: “I made Withering Heights. Wyler only directed it.”

“Only.” That’s how petty Goldwyn could be; he was willing to pay to get the best, but he never shrank from grabbing credit for how things turned out. But as Wyler rhetorically asked an interviewer in 1980: “Tell me, which pictures have ‘the Goldwyn touch’ that I didn’t direct?” 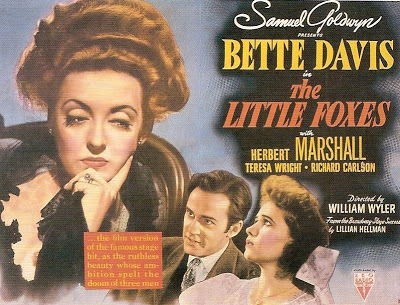 Well, there was The Pride of the Yankees (Sam Wood did that one), and Ball of Fire (Howard Hawks), and The Hurricane (John Ford). But Wyler’s point is well-taken. No other director worked as many times for Goldwyn — seven — and of the seven times Goldwyn was in the running for a best picture Oscar, only two were directed by anyone else (Yankees and The Bishop’s Wife). Without movies like These Three, Dodsworth, Wuthering Heights, Dead End and The Little Foxes, the vaunted “Goldwyn touch” could well boil down to those Eddie Cantor musicals, Danny Kaye’s 1940s comedies, and Guys and Dolls. 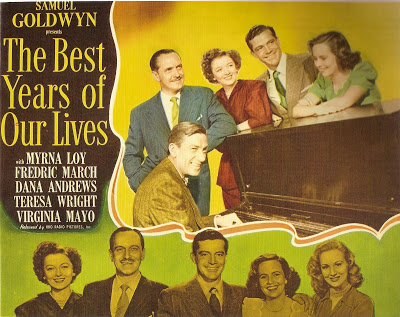 Take this picture, for example. If there’s one movie besides Wuthering Heights for which Goldwyn is remembered now, it’s The Best Years of Our Lives. It’s the movie that finally got Goldwyn into the winner’s circle on Oscar night, and it was Wyler’s picture one hundred percent.

Goldwyn tried to talk him out of making it. Goldwyn had commissioned the story from writer MacKinlay Kantor as World War II was finally inching to its end; he said he wanted something about returning soldiers, and he gave Kantor carte blanche as to the story; but when Kantor came out with Glory for Me, a 288-page novel in blank verse, Goldwyn lost interest and wrote the investment off as money down the hole.

In October 1945 William Wyler was himself a veteran back from the war, and he connected with Glory for Me as Goldwyn never could. He still owed Goldwyn one more picture under the contract that had been in abeyance for the duration, and this was the one he wanted to make. Goldwyn demurred. Wyler insisted. He got his way, and he and Goldwyn (among others) got their Oscars.

But service in World War II taught William Wyler one lesson that didn’t make its way into The Best Years of Our Lives: he learned that life is too short to deal with people like Samuel Goldwyn. When Goldwyn denied him the “A William Wyler Production” credit he’d promised, snubbed him at the after-Oscar party, then turned out to have cooked the books to shortchange him on his profit participation, Wyler washed his hands.

Wyler could have said, “I made The Best Years of Our Lives. Sam Goldwyn only produced it.” But he never did, because William Wyler was a gentleman. With all he and Goldwyn had in common, and after all they had helped each other to accomplish, that was the one big difference between them.
.