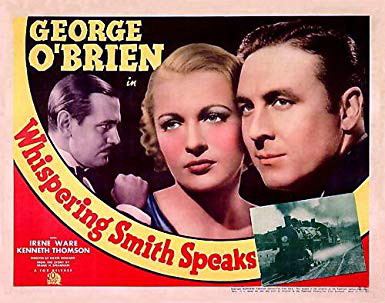 Sunday morning began with another George O’Brien B-picture directed by David Howard. Whispering Smith Speaks (1935) was made for producer Sol Lesser, who spent nearly fifty years flitting around the margins of Hollywood, a sort of Sam Goldwyn of Poverty Row. One of Lesser’s standard practices — and I’d love to have been a fly on the wall of some of these meetings to see how he managed it — was to purchase the rights to popular literary characters, then to make cheapjack knockoffs using the titles or character names but little else. And that’s what he did here.

Readers of Frank H. Spearman’s 1906 novel Whispering Smith, about a railroad detective in the Old West, or the various movies made from it (including the one in 1948 with Alan Ladd), or the short-lived TV series with Audie Murphy, could be forgiven for expecting a western — especially with George O’Brien in the lead. Not so; Whispering Smith Speaks (the title apparently refers to the fact that this is Spearman’s hero’s first appearance during the sound era) is a modern-day (i.e., 1935) story, and the only “western” element is that it appears to take place somewhere in California. It’s actually more a romantic comedy than an action movie, with O’Brien playing the son of a railroad tycoon named Harrington who sets out to learn his dad’s business from the ground up, landing a job (under the name “Smith”) with a little podunk railroad run by winsome Irene Ware. Once there, he flirts with, romances, and wins the boss. In the process he not only saves her from an unscrupulous lawyer who plans to cheat her in a “friendly” takeover, but he proves to his own father that he’s a railroad man to reckon with, not just the owner’s pampered son. It was fun, if a bit of an anticlimax after The Marshal of Mesa City. Personally, I wouldn’t mind if Cinevent gave us two George O’Brien pictures every year from now on. 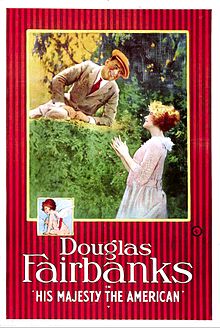 Next came His Majesty, the American (1919), an irresistible athletic comedy starring Douglas Fairbanks in his pre-swashbuckler phase. Not that the plot matters, but Doug played New Yorker William Brooks, who satisfies his hunger for thrills by tagging along with the city’s fire department (he even has a fire alarm and a pole to slide down in his home). When the city cracks down on such activities, he decamps to the town of “Murdero, Mexico” (!) in search of excitement. After a brief run-in with Pancho Villa, he is summoned to the tiny European kingdom of Alaine, where he is promised information about his own unknown roots, as well as the source of the mysterious funds that have supported him all his life. It turns out that he’s nothing less than the heir to the throne of Alaine, raised in the safety of America and in the bliss of ignorance; he has returned to his homeland in the nick of time to save it from the traitorous Minister of War, who plans to overthrow his grandfather the king. Needless to say, Prince William makes short work of the villains, straightens out Alaine’s tempestuous politics — and even learns to his delight that the girl he’s become smitten with (Marjorie Daw) is the countess who was betrothed to him in infancy. I must confess that I’m more partial to Doug’s costume pictures, but these modern-dress adventures of his have their own pleasures too, and His Majesty, The American is probably the best of the ones I’ve seen, with Fairbanks at his most intensely likeable.

After the final three chapters of Hawk of the Wilderness came The Midnight Girl (1925), This was a rather florid soap opera — an agglomeration of romantic triangles that overlap like elements in a Venn diagram — with a curiosity value it couldn’t have had in 1925. The curiosity value came from the casting of Bela Lugosi, still some years away from his fateful success as Count Dracula, as opera impresario Nicholas Harmon. As the picture opens, Harmon has had a falling out with his son Don (Gareth Hughes), who disapproves of his father’s affair with the opera singer Nina (Dolores Cassinelli). Don makes a clean break, leaving his father’s opera company for a job as bandleader in a cafe. There he meets Anna (Lila Lee), a Russian émigré with a beautiful voice who has been unable to find work. Don gets her a job in the cafe as a dancer in a production number called “The Midnight Girl”. Meanwhile, Nina’s voice is failing, and impresario Nicholas is tiring of her anyway, so he’s on the lookout for a new singer/mistress; eventually his roving eye settles on Anna. Add to this Don’s ex-girlfriend Natalie (Ruby Blaine) who is determined to get him back, plus Nina’s equal determination not to be cast off by Nicholas, and the scene is set for all those overlapping triangles.

The Midnight Girl had its pluses, including the interest of seeing Bela Lugosi as a more or less ordinary American (something possible only in a silent film). It’s chief drawback was the fact that the three women in the picture — Lila Lee, Dolores Cassinelli and Ruby Blaine — all looked exactly alike; whenever one came on the scene, we had to wait for her to do or say something to figure out who she was. 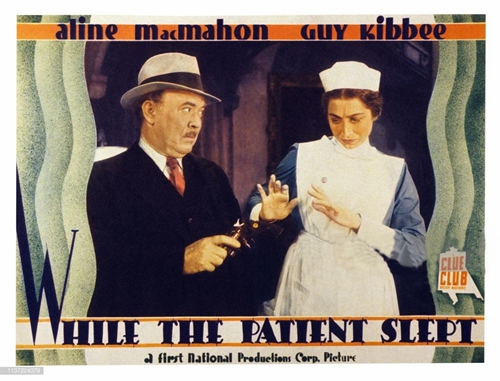 This brought us at last to the final picture of the weekend, a nifty little 65-minute murder mystery, While the Patient Slept (1935). Aline MacMahon starred as Nurse Sarah Keate, the creation of prolific mystery writer Mignon G. Eberhart, and Ms. Eberhart’s only series character. There were seven Sarah Keate novels, and five of them were filmed. This was the first, and one of the few pictures to top-bill MacMahon, one of Hollywood’s most welcome and reliable supporting players (for another one, check out the excellent Heat Lightning [’34] sometime).

In While the Patient Slept, MacMahon’s Nurse Sarah is called to the gloomy old Federie mansion to tend to patriarch Richard Federie, who has suffered a stroke after receiving some mysterious bad news. The Federie clan gathers at the old man’s bedside, then members begin dying off one  by one, and Nurse Sarah teams up with police detective Lance O’Leary (Guy Kibbee) for clue-gathering and flirty banter. Last year’s Cinevent ended on a real highlight, the marvelous Dreamboat (1952) with Clifton Webb and Ginger Rogers. This year’s finale may not have reached quite that daffy height, but it was highlight enough; you can’t really go wrong with one of those fast-paced Warner Bros. 1930s B’s, and Aline MacMahon and Guy Kibbee are hard to beat. 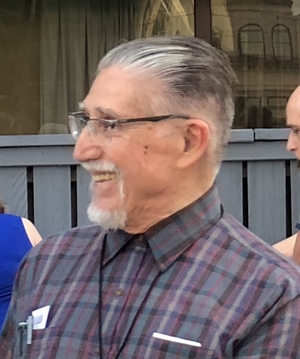 I don’t want to leave my survey of this year’s Cinevent without mentioning my friend Phil Capasso. Last year, at the Golden Anniversary Celebration, Phil was honored as the only person who had been to every single Cinevent since the first one back in 1969. This dedicated attendance earned him the first slice of the 50th anniversary cake that evening, not to mention the privilege of introducing Cinevent 50’s guest of honor Leonard Maltin. Needless to say, Phil was in Seventh Heaven at that party, and as happy as I’d ever seen him. Then on August 28, 2018, barely three months after I took this picture of him in Columbus, Phil passed away at his home in Carmel, Indiana, at age 82. I’m sure he was planning for his annual trek to Los Angeles for Cinecon 54 on Labor Day Weekend. And I have no doubt he was already looking forward (in his customary phrase, “if God spares”) to joining us all again in Columbus for this year’s Cinevent 51.

I met Phil through my uncle at my first Cinevent in 1998, and every year since then I looked forward to renewing our acquaintance. Some years ago he was diagnosed with leukemia, but he had been successfully coping with that ever since getting the news. His cheerfulness and high spirits never wavered, and he clearly regarded every day as a gift to be treasured and enjoyed. This year’s Cinevent was dedicated to Phil, with tributes in the program contributed by author Scott Eyman and Bob Hodge of Cinevent’s team of “Peerless Projectionists”.

So long, Phil, and thanks for the memories! You were sorely missed by many this year, and you will be for years to come.