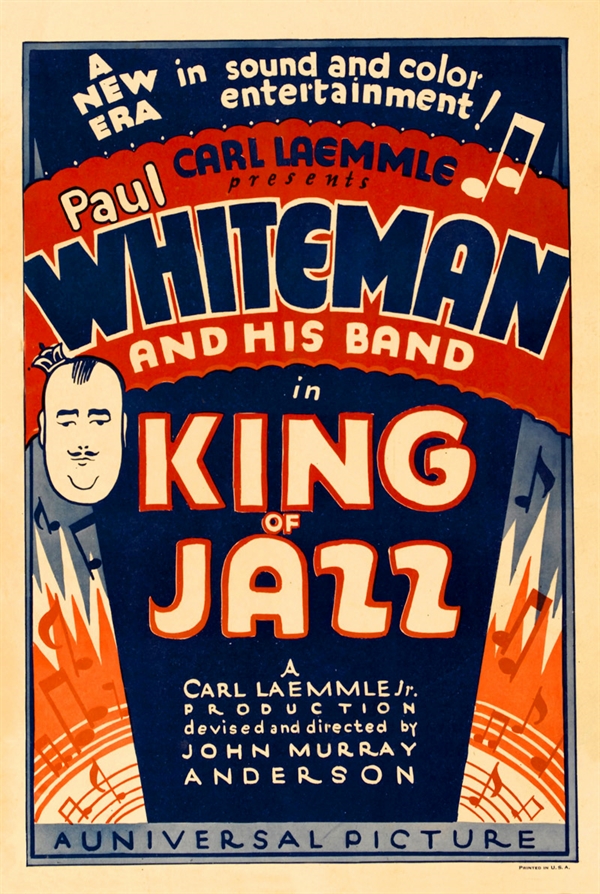 Scroll down to see, if you haven’t seen it already, my two-part tribute to Universal Pictures’ King of Jazz (1930). This epilogue is for the benefit of Cinedrome readers who live within traveling distance of Sacramento, Calif. I’ve got big news, and the news is this:

The February 22 screening at Sacramento’s Tower Theatre is ON!

Kudos to the Sacramento Traditional Jazz Society for sponsoring this screening. They’re not only bringing this brilliant restoration of a truly one-of-a-kind historic picture to Sacramento audiences, but they’re stealing a march on San Francisco, Portland, Seattle and every other city on the West Coast except Los Angeles (where KOJ screened at Cinecon in September). This is a real feather in Sacramento’s cap — and in the Jazz Society’s.

I urge anybody who can make their way to the Tower at the corner of Broadway and Land Park Drive in Sacramento by 7:00 p.m. on the 22nd of next month to nail their tickets down right away — seating is limited, and it may be a while before the inevitable Blu-ray makes its way to market. It seems that clearing the music rights to all the songs used in King of Jazz is proving quite a challenge; unlike MGM, Warner Bros., Paramount and other studios, Universal never had their own music company. And besides, in 1930 nobody foresaw the need to secure video — or even television — rights. Somehow this issue didn’t arise when Universal issued their “bastard” VHS version in the 1980s, but it’s here now: the rights have drifted off into the (possibly unknowing) hands of diverse relatives, survivors and heirs and are proving quite a can of worms to track down.

Theatrical rights, however, are another matter, of course — Universal secured those in perpetuity back in 1930, and they’ve guarded them closely ever since. (The Los Angeles County Museum of Art walked into a humiliating buzzsaw back in 1970 when they announced a screening of an incomplete print borrowed from a private collector without securing the necessary rights. Universal lowered the boom, the egg-faced Museum had to back down, and the thing only blew over when they offered to surrender the print to the Library of Congress. The hapless collector was out of luck.)

Fortunately, there’ll be no such problem at the Jazz Society’s upcoming benefit screening. They’ve secured rights, and in fact Mike Daruty, NBCUniversal’s Senior V.P. for Global Media Operations, is tentatively scheduled to join us all at the Tower and introduce the picture.

So spare no effort and do yourselves a favor: Get your ticket(s) now, either by clicking on the link above to the Jazz Society’s home page, or by clicking here to go directly to their ticket site. King of Jazz may have been a financial debacle for Universal back in the day, but believe me, of all the studio revues of the early sound era, there isn’t another one that deserves to be mentioned in the same breath. And in its newly restored form, it certainly doesn’t look like an 86-year-old movie.

I hope I’ve persuaded you; the Sacramento Traditional Jazz Society is doing a tremendous public service by sponsoring this screening, and they deserve to benefit to the max from it. Meanwhile, here are another couple of links for your enjoyment and edification:

A YouTube post of My Pal Paul, a black-and-white Walter Lantz cartoon produced by Universal as a cross-promotion; and

A Vimeo clip with a three-minute trailer for the picture. Unfortunately, it’s from a 16mm print with badly faded color; trust me, the picture looks much better now (and for that matter, it sounds better too, with a cleaned-up monaural soundtrack). This link is generously provided by my friend Matías at Matías Bombal’s Hollywood.