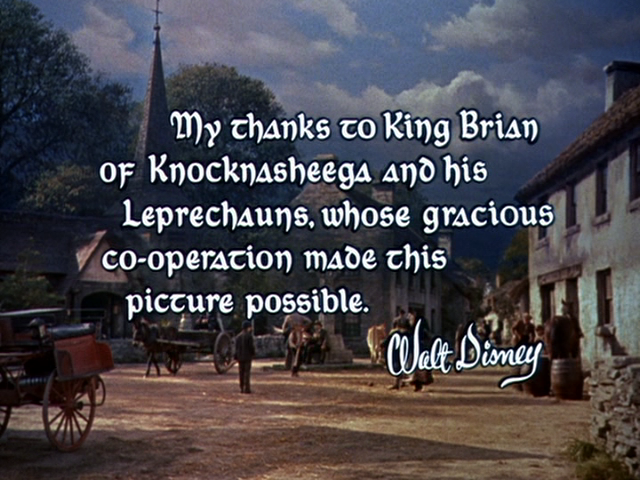 With this title card at the opening of Darby O’Gill and the Little People, Walt Disney doubled down on the premise behind the broadcast of his weekly television show on May 29, 1959. (The official name of the series had changed to Walt Disney Presents in the fall of ’58, but everybody I knew still called it Disneyland.) On that episode, titled “I Captured the King of the Leprechauns”, Disney recounted to his Irish-American friend, actor Pat O’Brien, the research and negotiation behind the production of Darby O’Gill. Research in the form of a visit to Ireland to confer with scholars of Irish folklore; negotiation in the form of an arranged meeting with King Brian himself to offer him and his minions roles in the picture Disney was planning.

From the “scholar of Irish folklore” he consults, Disney learns  the story of how the leprechauns came to Ireland. What the man tells him is a tale straight out of Herminie Kavanagh’s book — I’ve found it nowhere else in print, so it’s likely she created it herself — and it goes like this: King Brian and his followers are fallen angels, casualties of the revolt of Satan in Heaven before the beginning of time. Too small and timid to engage in the fighting, they hid under the Golden Steps until Satan and his minions were defeated and cast into Hell. Confronting King Brian after the battle, the Archangel Gabriel told him, “An angel who won’t stand up and fight for what he knows is right may not be deserving of Hell, but he’s not fit for Heaven.” So Brian and the rest were banished to live on the Earth, but were mercifully granted leave to settle in a place of their choice. They chose what came to be known as Ireland because it was the closest thing to Heaven that they could find on Earth. 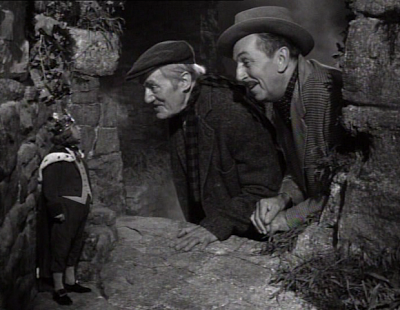 This charming legend doesn’t appear in Darby O’Gill (although Watkin found room for it in his novelization), so it was canny of Disney to include it in “I Captured the King of the Leprechauns”; it certainly made an impression on me at the time and has stayed with me all these years. Disney then goes on to recount how that Dublin scholar referred him to a “shanachie”, or storyteller, in the village of Rathcullen named Darby O’Gill, and how Darby arranged for the producer to have an audience with King Brian. At that meeting, according to Disney, his nebulous idea of making a picture about leprechauns took more definite shape, and he proposed that Darby and Brian should both appear in the picture playing themselves and telling the story of their adventures together. King Brian first dismissed the idea, but when he and Darby got into an argument over which of them would make the better “fillum actor”, Disney knew he had them.
I borrow a phrase from Leslie S. Klinger, editor of The New Annotated Sherlock Holmes, to describe this episode of Walt Disney Presents. In his tome, Klinger admits that he perpetuates “the gentle fiction that Holmes and Watson really lived”. And that’s just what “I Captured the King of the Leprechauns” is — a gentle fiction. Even as a kid I recognized the episode for what it was, but once I had seen it, oxen and wainropes couldn’t have kept me away from Darby O’Gill and the Little People.
But my own reaction is neither here nor there. More to the point, Walt Disney felt free to purvey this gentle fiction, to assert that he had enlisted the aid of real leprechauns — saying so not only in a TV promo, but right there on the screen as the picture was about to begin — because he knew that he had a picture with seamless and absolutely convincing special effects. 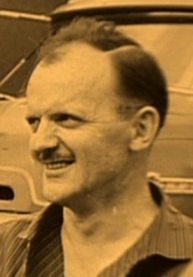 The man Disney assigned to spearhead those effects was Peter Ellenshaw, who had worked with Disney since his first all-live-action feature Treasure Island in 1950, and whose career with the studio would far outlive Disney himself. Ellenshaw was a matte painter — but that’s a bit like saying Chopin was a piano player. A matte painter, in those days before computer graphics, painted scenes on sheets of glass set between the camera and the subject, both to fill in the image to be photographed and to mask out elements on the set that weren’t meant to be seen.
For example, take another look at the frame-cap at the beginning of this post, an establishing image of Darby O’Gill’s village of Rathcullen. A little over half that picture is Peter Ellenshaw’s work. As the set was built on the Disney Studio lot in Burbank, the church on the left had no roof and no steeple, the pub on the right had only half a roof and no chimney. Essentially, everything in the frame above the word “Leprechauns” — the roofs, the trees, the sky, the clouds — was painted on glass by Peter Ellenshaw. Ellenshaw had a major hand in establishing the distinctive look of Disney’s live-action movies from Treasure Island through 20,000 Leagues Under the Sea, Davy Crockett: King of the Wild Frontier, Johnny Tremain, Pollyanna and Mary Poppins (he snagged an Oscar for that one) all the way through The Black Hole (’79) and Dick Tracy (’90). 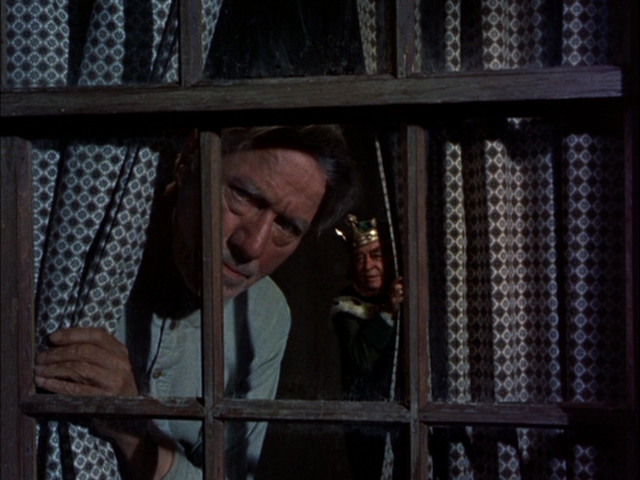 For Darby O’Gill, Ellenshaw and Eustace Lycett employed special effects techniques that were simple in concept but complex and demanding in execution. The basic idea was called “forced perspective” and it boiled down to this: since the leprechauns had to appear one-quarter the size of a normal human being, the actors playing them had to be four times farther away from the camera. This shot of Darby and King Brian peeking out the window as Katie arrives home from a Saturday night dance makes a good illustration. The illusion is flawless, with Darby seemingly standing on the floor and King Brian perched beside him on the window sill. In fact, however, Albert Sharpe was standing (let’s say) five feet from the camera, while Jimmy O’Dea (along with his side of the curtains) was 15 feet behind him.
This simple idea came with a number of nuts-and-bolts challenges, both physical and photographic. In this shot, for example, the pattern on King Brian’s curtain had to be four times the size of the pattern on Darby’s. The fabric had to be thicker and stiffer so that the pleats would match. Even the leprechaun costumes had to be made of stiffer material so they would look like doll-size garments cut from a bolt of normal cloth. The set had to be flooded with light, even in a night-lit shot like this, so the camera aperture could be stopped down enough to keep both actors in focus. (Sometimes, Ellenshaw said, the set would get so hot that production would have to be shut down for the day; the battery of lights on the studio’s soundstages even triggered power failures all over Burbank.) If  humans and leprechauns had to look at each other, the actors needed separate targets to focus on so that their eyelines would match on film (the shot above of King Brian, Darby and Disney illustrates this). Props had to be built in two sizes — one to be seen with Darby, the other with the leprechauns — and they had to match exactly. Some shots required more distance between Darby and the leprechauns than the size of the soundstage itself. In those cases, the crew used the Schufftan Process, developed in the 1920s by the German cinematographer Eugen Schufftan. A mirror was set up between Darby and the camera at a 45-degree angle, with the reflective surface scraped away so Darby could be seen through the glass, while the camera also caught the reflection of the leprechauns off to the side and far behind the camera. 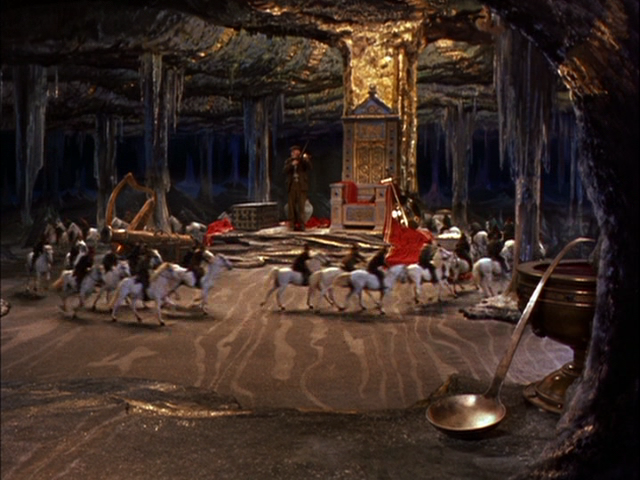 Every shot involving the leprechauns was storyboarded in detail, its requirements carefully calculated with mathematical precision. (These calculations, Ellenshaw said in his 2003 book Ellenshaw Under Glass: Going to the Matte for Disney, were duck soup to Lycett and director Robert Stevenson, “who was a mathematician in his own right. They were very interested in mathematics, read books on it just for pleasure!”)
For all these challenges, the modus operandi chosen by Ellenshaw and Lycett had one unsurpassable reward: It enabled human and leprechaun to appear simultaneously on a single strip of film, with no differences in film grain, no change in visual texture, no telltale blue lines that would be noticeable, however subliminally, if shots had been combined in the lab. The eye (and brain) accepts the illusion without question, and Disney’s boast that he enlisted real leprechauns in the cast passes the test — we see the evidence with our own eyes.
Have I blown Darby O’Gill‘s cover by telling you this? Not at all. Even knowing how it’s done, the trick is still magic. In the next installment I’ll get into the magic of the story itself; for now I’ll leave you with this shot. Darby is in the mountain hall of Knocknasheega, in King Brian’s throne room. He fiddles the Little People a lively tune that sets them dancing madly until, carried away, they run off and gallop back on horseback, riding in a circle around him. At this precise moment, everyone — everyone — who sees Darby O’Gill and the Little People thinks exactly the same thing: “My God, where on Earth did they get all those little tiny horses??!!” They have already accepted, on an emotional level, that these are genuine leprechauns; the only question is where they found horses to ride.
I know of no other shot in the long history of visual effects that gets such a reaction.