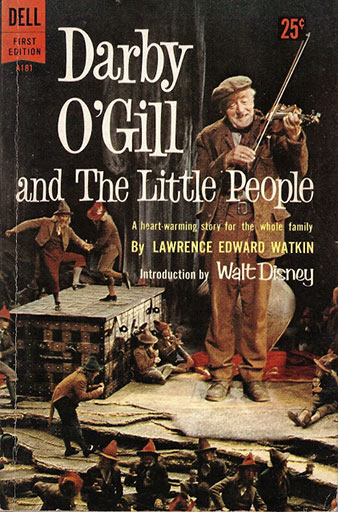 In 1962, if I had known that the actor playing James Bond was the same actor who played Michael McBride in Darby O’Gill and the Little People, I might have taken the trouble to see Dr. No sooner than I did. But in all the publicity surrounding the screen debut of Ian Fleming’s secret agent, and the handsome young discovery of producers Harry Saltzman and Albert Broccoli, there was scant mention (if any) of the picture Sean Connery had made for Walt Disney three years earlier. Small wonder: Darby O’Gill was a flop.
At this remove in time, it’s easy to forget how many of the movies we call “Disney Classics” were considered nothing of the kind when they were new. Snow White and the Seven Dwarfs was a smash right enough, the top-grossing movie of all time — for a couple of years, until Gone With the Wind left it in the dust. But Pinocchio (’40) was a disappointment, Bambi (’42) was a flop, and Fantasia (’40) was a catastrophe. Only Dumbo (’41), followed by contract work for the government during World War II, kept Disney from going under altogether, and spared him the embarrassment of defaulting on the spiffy new studio he’d built with the profits from Snow White. In time, and thanks to persistent reissues every seven years, Disney’s faith in his pictures would be borne out as each one eventually found its audience. (Remember this when you hear talk about what a “bomb” Disney/Pixar’s John Carter was.)
Darby O’Gill and the Little People found its audience too…eventually…sort of. It wasn’t until 1969, a full decade after its release — and with Walt Disney nearly three years in his cremation urn — that the picture got its first reissue. There was another in 1977, but the picture still made few ripples — and certainly no splash — at the box office. After that, the studio made the ultimate surrender: they abandoned theatrical hopes for Darby and relegated it to two-part broadcasts on television.

The picture was never a flop as far as I was concerned. I loved it in 1959 when I saw it at the Stamm Theatre in Antioch, Calif. I loved it in 1960 when I read this novelization by Lawrence Edward Watkin of his own screenplay. And when it was reissued in ’69 (on a double bill with Dick Van Dyke and Edward G. Robinson in Never a Dull Moment) I went to see it almost every night it played — wondering with bemusement exactly when Sean Connery got into this movie. I contented myself with one viewing when it was reissued in ’77, but I said then what I say to this day: Darby O’Gill and the Little People is one of Walt Disney’s unsung masterpieces.

Disney himself attributed the picture’s failure to the unusually thick Irish accents of his actors, plus the fact that he was unable to make the picture as he originally planned, with Barry Fitzgerald playing the double role of Darby O’Gill and King Brian of the leprechauns. Maybe so, but personally, I think that in the long run the movie dodged a bullet. Barry Fitzgerald and softer brogues might have made Darby a bit more of a hit, but they would have made it much less of a masterpiece. (I’ve read that for some releases the dialogue was redubbed with more America-friendly voices, but if so I never saw or heard any of those prints. Thank God.) 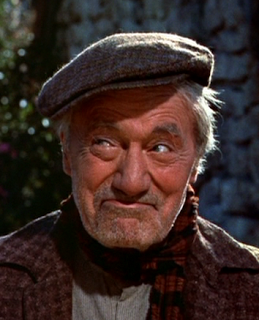 And as for Barry Fitzgerald…Well, all due respect to the dear man, but by 1958, as Darby went into production, he was a real star, more identified with Hollywood than with Ireland. Fitzgerald turned Disney down because he felt too old to play either Darby or King Brian — ironic, then that the role of Darby went to Disney’s second choice, Albert Sharpe, who was three years older. Disney had seen Sharpe on Broadway in Finian’s Rainbow in 1947, about the time he (Disney) discovered H.T. Kavanagh’s book Darby O’Gill and the Good People. 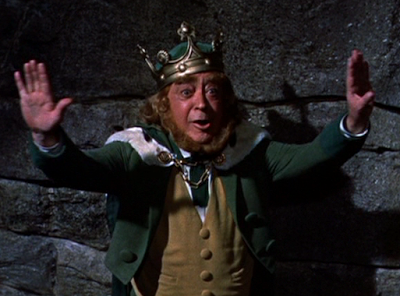 For King Brian, Disney settled on Jimmy O’Dea, a popular Dublin comedian who performed in both English and Gaelic. O’Dea had appeared in a handful of movies since 1926, and one Irish-American picture, John Ford’s The Rising of the Moon (1957), while Sharpe had played small roles in a smattering of Hollywood movies: Up in Central Park (’48) with Deanna Durbin, Royal Wedding (’51) with Fred Astaire, and Brigadoon (’53) with Gene Kelly, among others. When Disney came calling, Sharpe was retired from acting and living on a pension in working-class Belfast. Both he and O’Dea, despite long stage experience, were largely unfamiliar faces, and their performances give Darby O’Gill an aura of authenticity it could never have had with Barry Fitzgerald playing both roles. 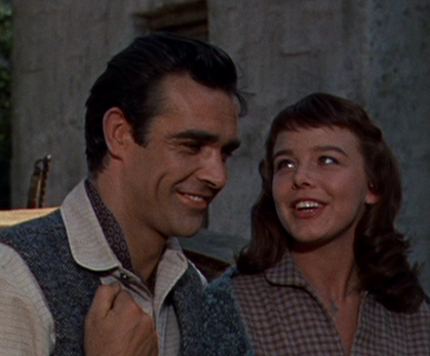 Walt Disney’s two young discoveries for Darby O’Gill were Sean Connery as the young man come to take Darby’s place as caretaker on Lord Fitzpatrick’s country estate, and Janet Munro as Darby’s spirited daughter Katie. Of Connery — almost incredibly young and handsome here — hardly anything need be said. But it’s worth mentioning that when Albert Broccoli’s wife Dana saw Darby she told her husband he could stop looking: “Well, that is James Bond!” More than half a century on, after an Oscar, a knighthood, and five more actors playing Bond, Dana Broccoli’s judgment still stands, and all because she saw Darby O’Gill and the Little People. Walt Disney deserves more credit for setting Sean Connery on his road to world treasure-hood than he usually gets.
At the time, 24-year-old Janet Munro seemed like the safer bet for long-term stardom. “Miss Munro, a delight to behold,” said Variety’s reviewer, “may be at the threshold of a glamorous career.” The daughter of Scottish music hall artist Alex Munro (a stage name for both; the family name was Horsburgh), Janet had, like Connery, compiled a worthy resume in British television, and like him, was making her American screen debut. Disney signed her to a five-picture contract and she appeared in Third Man on the Mountain (’59), Swiss Family Robinson (’60) and The Horsemasters (’61; shown on Disney’s TV show in the States, released to theaters in Europe) before her contract was dropped (the reason is a little vague). The glamorous career forecast by Variety failed to materialize, though she worked steadily through the 1960s amid an onslaught of personal and health problems. She died of chronic heart disease (compounded, alas, by alcoholism) in 1972 at the age of 38. 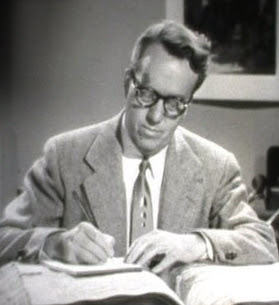 Back in 1947, Disney had hired Lawrence Edward Watkin to adapt the Darby O’Gill stories into a screenplay. Watkin was the author of On Borrowed Time, a fantasy novel about an old man who traps Death in his backyard apple tree. The novel was adapted into a successful play by Paul Osborn and a 1939 movie starring Lionel Barrymore and Cedric Hardwicke. It would be 12 years before Watkin’s efforts on Kavanagh’s stories saw the light of a projector lamp; in the meantime, he did some of his best work on some of Disney’s best live-action pictures: Treasure Island (’50), The Story of Robin Hood and his Merrie Men (’52), The Sword and the Rose (’53), The Great Locomotive Chase (’56), The Light in the Forest (’58).
The H.T. Kavanagh mentioned in Darby O’Gill‘s credits was born Herminie McGibney in 1861. She first published her stories in McClure’s Magazine in 1901-02, then in book form in 1903, using her first married name, Herminie Templeton. Abandoned by her husband in 1893 and finally widowed by 1907, she married Judge Marcus Kavanagh of Chicago in 1908; subsequent editions of her books bore the name Herminie Templeton Kavanagh. The Darby O’Gill imagined by Mrs. Kavanagh differs greatly from the one played by Albert Sharpe. In the stories Darby is younger, with a wife still living and more than just Katie among his offspring (Kavanagh never says exactly, but it’s clear that Darby and Bridget O’Gill have at least four children). The story Watkin concocted for the movie was entirely his own invention, though it incorporated many of Kavanagh’s details of Irish folklore and matched the stories’ spirit exactly. The movie’s credits say “Written by Lawrence Edward Watkin, Suggested by H.T. Kavanagh’s ‘Darby O’Gill’ Stories”, and that’s the simple truth of it.
I’ll have more to say about Darby O’Gill and the Little People in Part 2. I wanted to get at least this first part up in time for St. Patrick’s Day.