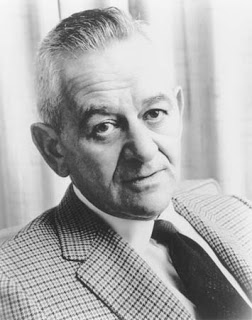 When I mentioned to a friend that I was planning a
post on William Wyler (which has now turned into
several), he said, “Good. I’ll be interested to see
what you consider his…” — he searched for the
right word — “…apotheosis.”

To tell the truth, at that point I hadn’t given much
thought to apotheosizing the man, though I guess
that’s what I’ve done. The dictionary gives two
definitions of apotheosis: (1) the elevation of
someone to the status of a god; and (2) the epitome
or quintessence. So since my friend brought it up,
what is, or was, the apotheosis of William Wyler?
Now that I’ve elevated him to somewhere in the
vicinity of godhood, what should we consider the
epitome and quintessence of his work? 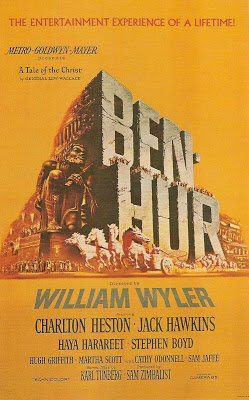 To answer that, we might as well start by taking a look at Wyler’s three Oscar-winning best pictures. Ben-Hur is the easiest to dismiss; in fact, it’s the hardest one not to. Check out this poster from 1959: The Entertainment Experience of a Lifetime. At the time, despite the exclamation point, that seemed a simple statement of fact, and it’s hard at this remove to explain the impact of Ben-Hur to anyone who wasn’t there. Star Wars wasn’t a patch on it, though the mystique has outlasted Ben-Hur‘s. Star Wars was the movie of the year in 1977, the way Titanic was in 1997. But in 1959 and ’60, Ben-Hur was a movie for all time; the few dissenting voices were swamped in the ballyhoo.

Check out Wyler’s billing on the poster, too — bigger than anything but the title. Certainly bigger than author Lew Wallace way up there in the fine print, but bigger too than even the stars or producer Sam Zimbalist (whom the stress of the project sent to an early grave). There’s an apotheosis for you.

By the time the Oscars rolled around Ben-Hur was a juggernaut that would not be denied. It seemed a waste of time even to bother finding four other nominees; the thankless mantle of designated also-ran was eventually conferred on Anatomy of a Murder, The Diary of Anne Frank, The Nun’s Story and Room at the Top. Nobody would have blamed those hapless producers if they had just stayed home on award night, so foregone was the conclusion. But what a change a half-century makes; all four of the sacrificial nominees have aged more gracefully than the winner. For that matter, the silent 1925 Ben-Hur holds up better, especially now on video, with its proper running speed and Technicolor sequences restored and spruced up with a stirring Carl Davis score; only the 1959 chariot race surpasses the original (even that, not by much), and Wyler had to leave the race to second-unit men Andrew Marton and Yakima Canutt. 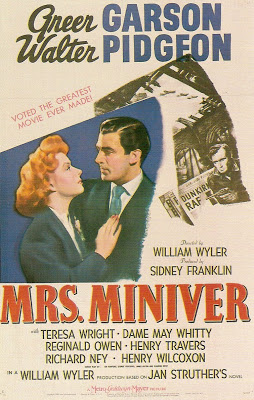 Mrs. Miniver was also a juggernaut in 1942, but that time the momentum was fueled by patriotism instead of studio hype. In this poster the exclamation point is appended to the claim “Voted the Greatest Movie Ever Made.” Whose votes were counted is left obscure, but there’s no denying that Miniver was beloved in its day, and its Oscar was similarly assured.

The picture began as unabashed pro-British propaganda in their war against Germany; it changed to pro-Allied propaganda when Pearl Harbor was attacked midway through production. Its morale value was a real boon to the war effort, and it deserves points for fervent sincerity, but alas, it’s a museum piece today, with the same Hollywooden imitation-Englishness that besets MGM’s 1938 A Christmas Carol. (In Miniver‘s case, British audiences seemed not to mind, no doubt taking the intention for the deed.) Among its fellow best picture nominees, even the rampant flag-waving of Wake Island, The Pied Piper and Yankee Doodle Dandy wears better today. Add in The Invaders, Kings Row, The Pride of the Yankees, The Talk of the Town  and The Magnificent Ambersons — and the case for Mrs. Miniver grows weaker with each title. Potent blow for righteousness that it was in its day, Miniver no longer has the ring of truth it had in 1942. 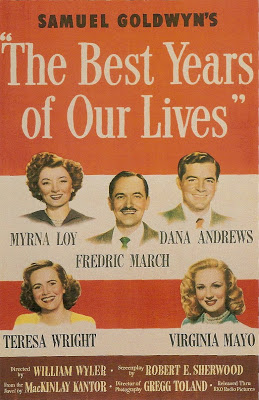 I use that phrase deliberately, because it brings to mind the first time I saw The Best Years of Our Lives, in the early ’70s when Sam Goldwyn had finally released at least some of his films to television. I watched Best Years one night with a friend, a conscientious objector then in the midst of the Vietnam War. As we watched the movie unfold, Wyler’s (and writers MacKinlay Kantor and Robert Sherwood’s, and producer Sam Goldwyn’s) story of three World War II vets struggling to readjust to civilian life, my pacifist-conscientious-objector-draft-dodger pal turned to me and said, “This still has the ring of truth, doesn’t it?”

It was true when he said it at the height of Vietnam, and it would still be true if he said it again today. Of Wyler’s three best pictures, The Best Years of Our Lives is the one that holds up with the fewest allowances made. True, it’s overshadowed today by another 1946 picture, one it beat in nearly every Oscar category: Frank Capra’s It’s a Wonderful Life. Well, I suppose that’s natural; Christmas comes back again every year and World War II only ended once. If the voting for best picture of ’46 got a do-over, Wonderful Life might well take the prize (I’d probably vote for it myself). Olivier’s Henry V would certainly be a strong candidate. Even The Razor’s Edge and The Yearling  might have their cheering sections.

Still, none of this negates the award having gone to Best Years. Wyler’s movie is one of those rare ones that tackled a current issue foremost in the minds of nearly everyone who saw it, dealt with the issue head-on and unflinching, and had (yes) the ring of truth to the very audience least likely to tolerate any Hollywood phoniness about it. Not only in America, and not only among the Allies. The movie was a smash hit from Stockholm to Sydney, winning best picture awards (Jan Herman tells us) “from Tokyo to Paris.” When we look at the Oscars for 1946, we don’t have to scratch our heads and wonder what people were thinking back then; The Best Years of Our Lives tells us.

So much for those three. But it’s a truism that people seldom win Oscars for their best work, and nobody illustrates the point better than William Wyler. To find his best work — his (ahem) apotheosis — I do think you have to look further than even the best of those. 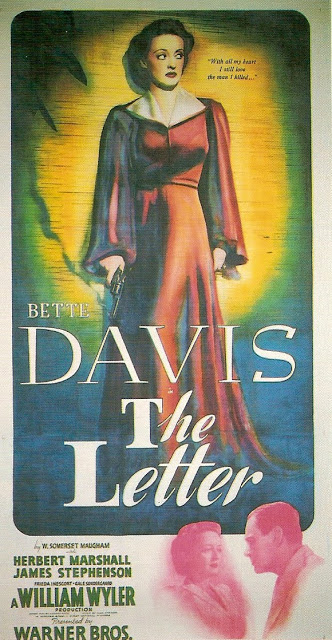 High on my short list — and right at the top, probably — would be the two pictures Wyler made on loan to Warner Bros. with Bette Davis. I’ve told the story of Jezebel and the 48 takes with the riding crop. Later on that same picture, when executive producer Hal Wallis made noises about firing Wyler for (what else?) wasting film and ordering too many takes, Davis went to bat for her director and saved his job, offering to work overtime if it would help (and only if they’d keep Wyler on).

True, she was having an affair with Wyler at the time, but she was a hard-nosed career woman who (if you’ll pardon the expression) never let the little head do the thinking for the big head. Whatever was going on during off-hours, she knew he was getting the performance of her life (so far) out of her, and was doing almost as much for others in the cast — George Brent and (of all people) Richard Cromwell were seldom as good, and never better.

He did almost as much on The Letter in 1940, two years later, and with a much better script (from the story by W. Somerset Maugham). Davis didn’t get the Oscar for this one, but she’s nearly as good as she was in Jezebel, showing the feral fang-and-claw passions roiling under a studied veneer of respectability. (The Wyler-Davis magic failed only on their third and final movie together, 1941’s The Little Foxes, and then only because the headstrong Davis wouldn’t listen to him. He wanted a more textured performance, but she insisted on going deep into Wicked Witch territory. Her two-dimensional approach wasn’t enough to sink the movie — Davis was always worth watching, no matter what — but it did allow the all-but-unthinkable:  not one but two other performers, Charles Dingle and Patricia Collinge, stole the picture from her.) 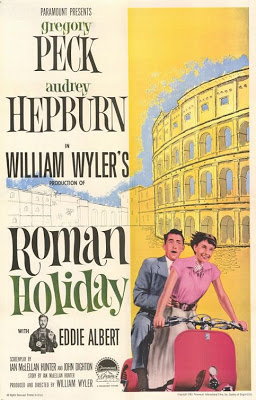 Other pictures should make the list. Wuthering Heights, no doubt, and These Three and Dodsworth. Hell’s Heroes, despite its early-sound primitivism — or maybe because of it — was a real eye-opener for me, showing a grittier, closer-to-the-bone Wyler than I’d ever seen. And Roman Holiday is a delight from beginning to end; all those heavy-prestige years with Sam Goldwyn, followed by weighty dramas like The Heiress and Detective Story, hadn’t sapped Wyler’s sense of fun, nor his ability to whip up a scrumptious feather-light souffle even in the broiling heat of an Italian summer. The famous Mouth of Truth scene, improvised by Wyler and Gregory Peck on the spot and sprung on an unsuspecting Audrey Hepburn, is a little gem of wicked fun, one of the great moments in Wyler’s career — and Peck’s, for that matter, and Hepburn’s. For that and other reasons, Roman Holiday makes my short list too.

Maybe not on the short list but deserving to be remembered (at least more than it seems to have been since it was the hot one to see back in 1965) is The Collector, essentially a two-characters-on-one-set drama of a timid kidnapper and his beautiful captive in which Wyler got brilliant performances from Terence Stamp and Samantha Eggar. Coming after the turgid Ben-Hur and the miscarried The Children’s Hour, here was reason to believe Wyler hadn’t lost it, and it gained him his final Oscar nomination. But maybe “it,” whatever it was, was slipping through his fingers at that; Wyler’s hearing and his lungs were deteriorating, and some of the excitement had surely gone out of the game. His next picture, Funny Girl, was a hit, but it strikes me as basically Ben-Hur with songs, and Barbra Streisand instead of a chariot race to provide excitement (and Wyler’s final acting Oscar). His next and last, The Liberation of L.B. Jones, was a physical ordeal, and critically savaged, barely released, hardly seen. He was proud of the picture, but he knew the grind would kill him if he tried to keep it up, so he got out, having nothing more to prove.

I guess my friend’s curiosity will have to remain unsatisfied, at least by me. I can’t name a single “apotheosis,” and even now I’ve probably left somebody’s favorite out. There’s no single “elevation” for me; there are just too many peaks, like the Himalayas with a dozen Everests.

You will find 198 posts in the category  on this blog.