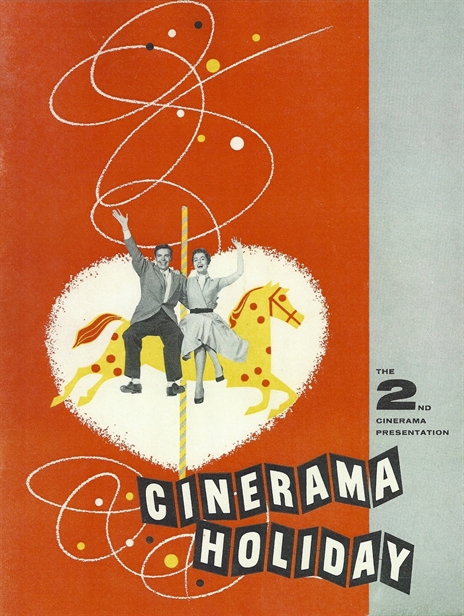 I had hoped to be able to go into more depth with this post, but events have overtaken me, so I have to write it pretty much off the top of my head and get it up as soon as possible.

It’s been, oh, 25 or 30 years now since a teenage cousin of mine heard me mention Cinerama and asked me what it was. I was astonished, back then, that there was someone who didn’t know. Well, that cousin is now 46, with a Ph.D. and a position in the Microbiology Dept. at the Univeristy of California Irvine. How many have been born since then who also don’t know what Cinerama was?

In a nutshell, and for the benefit of those who don’t know, Cinerama was the first successful widescreen process. Hollywood had flirted with widescreen photography in the late 1920s and early ’30s, but it proved to be an innovation too far for an industry already grappling with the transition to sound and the Great Depression, and the experiment quickly petered out in failure. 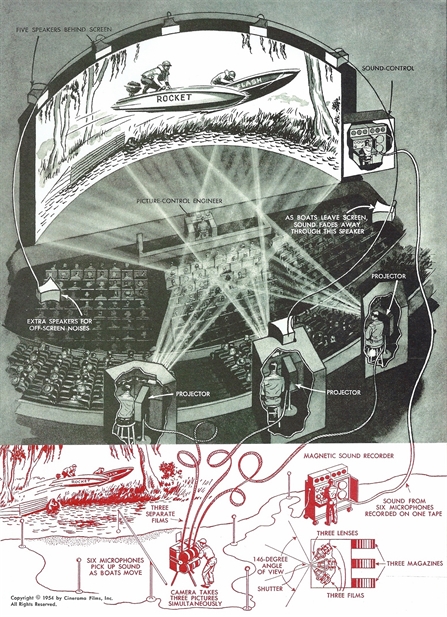 By the early ’50s things had changed — and besides, Cinerama was as different from those early pictures in Grandeur and Magnascope as FM radio was from AM. The screen wasn’t just wide, it was vast, curved 146 degrees to match almost the full range of human vision, using three synchronized projectors to display an image nearly five times the size of even the largest theater screen. And Cinerama had a multi-channel high-fidelity sound system for which a new term was coined: “stereophonic sound”.
Cinerama’s reign was brief, just a little over a decade, but it was the wonder of the age while it lasted. It was the brainchild of Fred Waller, an engineer, photographic researcher, special effects technician and director of short subjects at Paramount’s East Coast studio at Astoria, Long Island (he also invented water skis, believe it or not). Waller’s inspirational insight was the understanding that peripheral vision is what enables the eye to perceive depth, and he became obsessed with the idea of duplicating the entire range of human vision. Eventually, in 1939, he developed what he called Vitarama, an incredibly complicated system of 11 interlocking projectors in three rows of four, five and two, casting a single image on the inside of a hemispherical screen. In 1940, as it became increasingly clear that America would be entering World War II sooner or later, Waller contracted with the military to modify Vitarama (cutting the number of projectors from 11 to five) into the Waller Flexible Gunnery Trainer, an early version of a flight simulator (or videogame) for training airplane gunners in aerial combat.
After the war, Waller continued to fine-tune the process, streamlining the projectors from five to three, replacing the hemispherical screen with a wide, curved rectangle, and partnering with sound technician Hazard Reeves to develop that multi-track sound system. But Waller was unable to interest anyone in what he now called Cinerama until it came to the attention of Lowell Thomas, the famous radio commentator, adventurer, lecturer and journalist who had first made his name covering T.E. Lawrence’s campaigns in Arabia during World War I (Thomas made Lawrence’s name, too). Thomas enlisted the services of producer Merian C. Cooper. Long story short, the result of Waller’s know-how and Thomas and Cooper’s enthusiasm and showmanship opened at New York’s Broadway Theatre on September 30, 1952. That first Cinerama production, which opened as simply Cinerama and eventually came to be known as This Is Cinerama, is (not to mince words) one of the most important and influential movies ever made — after all, today, it is a rare and cheap movie indeed that isn’t produced in wide screen and stereo. 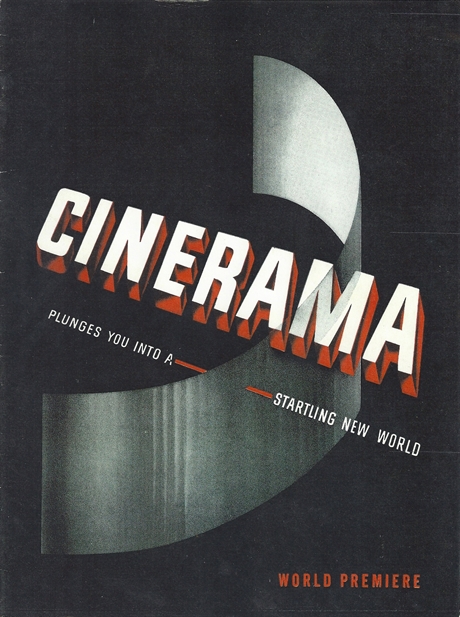 This coming September 30 will mark the 60th anniversary of Cinerama‘s premiere, and the occasion is not going unobserved. ArcLight Cinemas, which owns the Pacific Cinerama Dome in Hollywood (one of only three theaters in the world equipped to show true Cinerama) will be spending a week, from September 28 to October 4, presenting — to borrow the title of the second Cinerama production — a Cinerama Holiday. Every single Cinerama picture produced during the years Cinerama reigned as the Metropolitan Opera of movies will be on display, along with a couple of ringers — Cinerama’s Russian Adventure, an Americanized release of a picture produced by the Soviets in 1958 with pirated equipment and called Kinopanorama (then, typically of the time, the Russians accused us of stealing it from them); and Windjammer: The Voyage of the Christian Radich (1958), produced in a competing but compatible process called Cinemiracle — plus two movies that bore the Cinerama name even though they weren’t: It’s a Mad, Mad, Mad, Mad World (’64) and 2001: A Space Odyssey (’68).

Not all the screenings will be in “classic” Cinerama. Two of the early travelogues (This Is Cinerama and Search for Paradise [’57]) and the two “story” productions (The Wonderful World of the Brothers Grimm and How the West Was Won, both ’62) will be screened in their original three-strip (i.e., three-projector) form, albeit with digital sound reproduction to replace the original console that played Reeves’s seven-track magnetic sound strip. Mad, Mad World will be shown in Ultra Panavision, the 70mm process that supplanted (but could never replace) Cinerama after How the West Was Won. The others will all be digital presentations, most of them remastered from original negatives.

I’m not sure what to expect from those digital prints, but I’m willing take a chance. In any case, the trip down to Hollywood will be worth it to see This Is Cinerama and How the West Was Won again, and Search for Paradise and Brothers Grimm for the first time. If you can possibly make it to Hollywood, you’ll find it worth the trip too. Click here for details and to purchase tickets (at this writing, only the first screening of each title is available for purchase; later screenings will no doubt be along in time).

I’ll have more to say about Cinerama, but I want to get this post up as quickly as possible. Tickets have only been on sale since Thursday, and they’re already going fast.