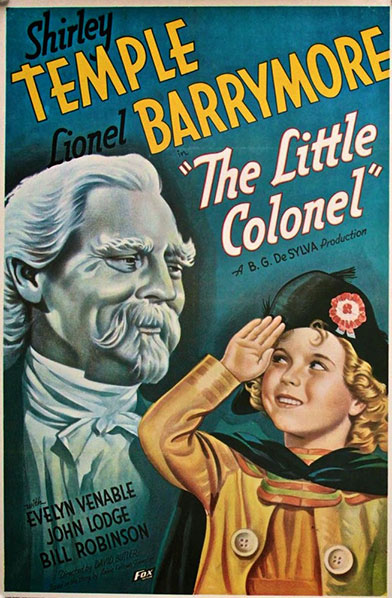 Shirley’s first picture of 1935 was a period piece, her first costume drama as a star. The source material was a children’s book by Annie Fellows Johnston of McCutchanville, Indiana. Mrs. Johnston turned to writing at the age of 29 when her husband died in 1892, leaving her with three small stepchildren to raise on her own. The Little Colonel, published in 1895, was her third novel, and it proved so popular that she wrote a sequel a year until 1907. She wrote, in all, some four dozen books before she died in 1931 at age 68, but The Little Colonel was the only one that was ever filmed. It’s a pity Mrs. Johnston couldn’t have hung on for four more years and seen the apotheosis of her most famous creation.

Anyone who thinks that a movie is never as good as the book should try reading The Little Colonel. Mrs. Johnston’s ever-so-precious style hasn’t weathered the years well; I suspect it hadn’t by 1935, either. (It’s available online here if you want to check it out.) The story, as the saying goes, had “good bones”, and writer William Conselman fleshed them out rather better than Mrs. Johnston had. (Conselman also wrote Bright Eyes and would write for Shirley again.)

In Conselman’s script (unlike the original book), the story opens before the birth of its title character. A title tells us it’s “Kentucky in the ’70s”, and we meet old Colonel Lloyd (Lionel Barrymore), an unreconstructed Confederate for whom the War isn’t over. At a soiree at his plantation he offers a toast: “Gentlemen, I give you the South — and confusion to her enemies!” But it’s the Colonel who’s due for confusion; one of those “enemies”, a Northerner — named Sherman, no less — has won the heart of his beloved daughter Elizabeth (Evelyn Venable). The Colonel interrupts her and her intended (John Lodge) in the act of eloping, and he warns her: “Elizabeth, when that door closes, it’ll never open for you again.” Elizabeth leaves without another word, and she doesn’t close the door — she slams it.

Next scene, it’s six years later and the Shermans — Jack, Elizabeth and their daughter Lloyd (Shirley) — are at a military outpost on the edge of the western frontier. Lloyd has become the darling of the post, and she receives a commission as honorary colonel — an addition by Conselman that makes the girl a “little colonel” in fact, not just as the nickname the author gives her in the original story. The family has sold everything they own and left their Philadelphia home. Papa Jack is to continue west to make a new home for them; when he’s well-established and it’s safe, he’ll send for his wife and daughter. Until then, Elizabeth and the Little Colonel will return to Kentucky and live in a small cottage on the family property that was left to her by her mother. 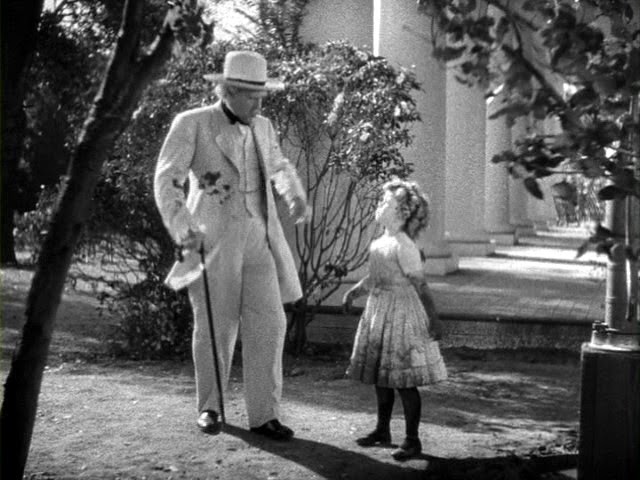 When the Old Colonel learns there are new tenants in the Cottage, he drops by to welcome them. But when the door is answered by his daughter Elizabeth, he storms off in a rage. “You’re a bad man to make my mother cry,” little Lloyd tells the old man’s portrait in the Cottage parlor. Later, when the two Colonels — Old and Little — finally meet, he doesn’t realize who the girl is, and he berates her for dirtying her dress making mudpies. Whoever your mother is, he tells her, she should teach you better. The Little Colonel stamps her foot — “Don’t you dare say anything about my mother!” — and hurls a fistful of mud at his white suit.

Later, when the old man learns who she is, he is mollified, even apologetic. He may have disowned his daughter and her husband, but he sees no reason not to associate with his granddaughter — especially since she reminds him so much of himself (and his outcast daughter, though he won’t admit it).

When Lloyd’s Papa Jack staggers home, sick with fever after having been swindled of the family’s savings by two hucksters (Sidney Blackmer, Alden Chase), Lloyd is sent to live with her grandfather to avoid catching what has laid her papa low. In time, just as we expect, the Little Colonel will effect a family reconciliation. But in the meantime she and her grandfather will just about drive each other to distraction, they’re both so willful, stubborn and short-tempered.
It’s easy to imagine that the Old Colonel’s consternation at the little girl’s spunk in standing up to him was a reflection of Lionel Barrymore’s own response to his little co-star; there’s a befuddled mix of exasperation and amusement that seems to come from both character and actor. Like the people they play, Barrymore and Shirley’s working relationship got off to a tetchy start: At their first rehearsal, when Barrymore stammered and groped for his lines, Shirley (who, being still too young to read, had memorized the whole script) prompted him. This sent the veteran actor storming off to his dressing room, where he sat sulking (and probably drinking) and threatening to walk off the picture.
Shirley describes in Child Star how both director David Butler and her own mother gently but firmly prodded her to make peace: you brought this on, they said, you have to make it right. And she did. She says she managed it by going to his dressing room, addressing him as “Uncle Lionel”, and asking for his autograph (“To my favorite little niece,” he wrote, “Your Uncle Lionel.”) It’s hard to believe it was a simple as that, for the seasoned old trouper to be coaxed out of his pout by the toddler who caused it, but that’s what Shirley says (oh to have been a fly on that wall!). Anyhow, Barrymore didn’t walk, and The Little Colonel crackles when he and Shirley are on screen together. 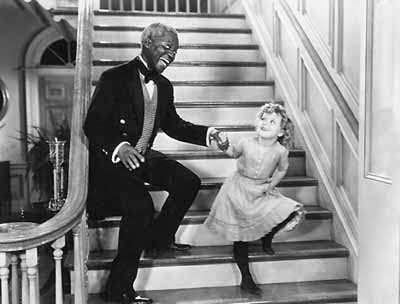 There’s another teaming in The Little Colonel that also makes it crackle. Playing the Old Colonel’s butler Walker was Bill “Bojangles” Robinson. Robinson began in vaudeville in 1900, and by 1934, when The Little Colonel was made, he was universally recognized (and for that matter, still is) as one of the greatest tapdancers who ever lived. Shirley was always proud that she and Robinson were the first interracial dance team in movie history. More than that, because of the age difference between six-year-old Shirley and the 56-year-old Robinson (and at the time, let’s face it, because of the difference in the color of their skin), they were one male-and-female team whose dances carried no hint of courtship or romance — nothing but the sheer joy of dancing together. (“The smile on my face wasn’t acting,” Shirley said in Child Star; “I was ecstatic.”) The teaming was Winfield Sheehan’s idea, and he hesitated only because he was unsure if Robinson could act; his three previous screen appearances had been dance-only. Robinson passed a screen test, and that was that. In all, he and Shirley would make five pictures together (I’ll get to the others in their time), and it all started here.

Their first dance together was the famous staircase dance. It was Robinson’s signature act, and he modified it to accomodate Shirley’s abilities; she couldn’t have come up to his level in the rehearsal time they had — but then, probably nobody could, no matter how long they rehearsed. Shirley remembered her “Uncle Billy” as “a superlative teacher, imperturbable and kind, but demanding…Every one of my taps had to ring crisp and clear in the best cadence. Otherwise I had to do it over.”

It’s been a while since I posted a YouTube clip of Shirley, and this is a good time to resume. Not the staircase dance, though. As good as it is, you don’t see as much of their body language, especially their faces beaming in the pleasure of each other’s company, as you do in this one, which comes later, with Walker and little Lloyd cavorting in the stables, to the accompaniment of “Oh! Susanna” on the harmonica:

It must be said that racial attitudes of the 1930s make The Little Colonel (and The Littlest Rebel, later in ’35) an awkward experience for some people today. It’s hard not to view these movies through the hindsight of how far African Americans have come (on screen and in real life) in the last 80 years. It’s worth remembering, though, the progress they had made by 1935 — what little there was, and only on screen at that — in the 40 years since The Little Colonel was written (or even the 20 years since The Birth of a Nation). We rightly cringe now when Colonel Lloyd calls to his granddaughter’s black playmates, “Come on, you pickaninnies!” But in Annie Fellows Johnston’s novel he uses an even uglier word — and for that matter, so does the Little Colonel herself. And to be fair to The Little Colonel (the movie), there’s a scene where Lloyd attends a black church’s baptism ceremony in a stream that runs through her grandfather’s property; the scene is presented unpatronizingly and without condescension. Also, the two most prominent black characters are played by Robinson as Walker and, as the Little Colonel’s cook and housekeeper “Mom Beck”, Hattie McDaniel (five years before she became the first African American to win an Academy Award). Both of them imbue their characters with a warmth and dignity that rises above the racism of the time.

Plus, of course and always, there’s the sheer pleasure of Shirley and Bojangles dancing. 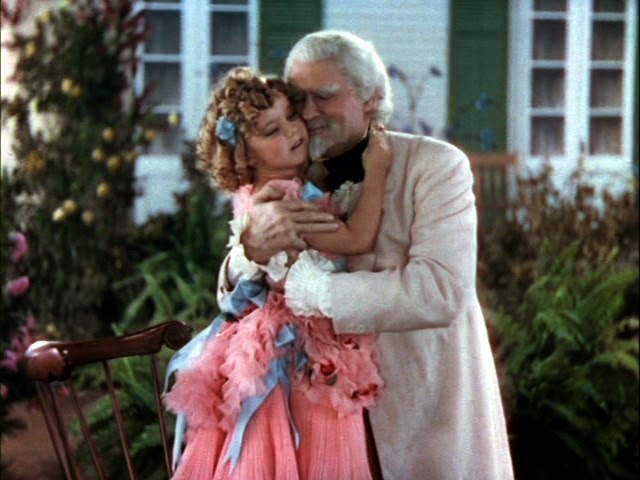 Apropos of nothing, and apparently just because the powers that be at Fox felt like it, The Little Colonel ends — after Papa Jack has gotten well, his fortunes have been restored, the swindlers brought to justice, and Colonel Lloyd reconciled to his daughter and son-in-law — in Technicolor. The rationale is young Lloyd’s penchant for casting her stories in colors: “Tell me a blue story”; “This is a yellow story”. Evidently, she asks her grandfather for “a pink party” (the surviving version isn’t clear; something seems missing), and he replies, “Yes, just as pink as those flowers,” as a vase of black-and-white roses change to pink-and-green. I leave The Little Colonel with a shot from this party scene because it’s Shirley’s first appearance in the newly-perfected Technicolor process — and her last for several years.