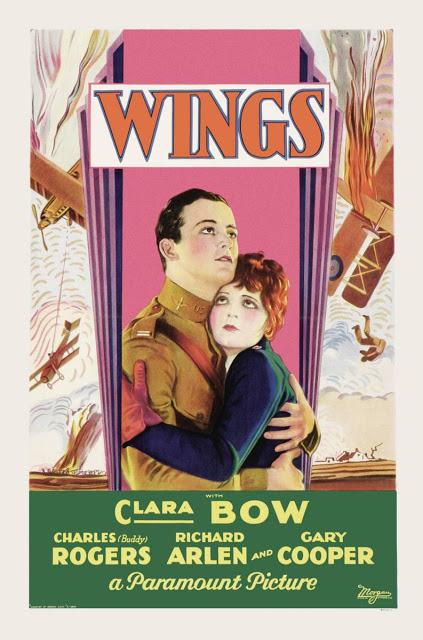 As a postscript to my last entry here at Cinedrome, I’ve just learned that Cinemark Holdings, Inc. is presenting one-night- only screenings of Wings this month as part of their Reel Classics series. There were two of them scheduled, but the first one (on May 2) was over before I knew about it. That leaves one more, on Wednesday, May 16. Go here on the Cinemark Web site and click on the Wings/Reel Classics box at the bottom of the page to see if there’s a participating Cinemark theater near you. If there is, you’ll find it well worth your while.

Based in Plano, TX, Cinemark has theaters all over the country, though not all of them are participating in this Reel Classics series (upcoming titles include Citizen Kane, The Searchers, North by Northwest and Cabaret); other chains under the Cinemark umbrella include Century, CineArts and Tinseltown theaters.

The screenings, of course, will be the brilliant Paramount restoration I wrote about last time; kudos to Paramount for doing it right and standing behind their product to the extent of furnishing these big-screen showings. If all extant silent pictures got the same loving care, we’d have an embarrassment of riches on our hands.

I plan to catch the screening here — if only to see how many people show up (the attendance at Casablanca in March was quite impressive — but of course, that was Casablanca). I may be there all by myself, for all I know — but if I’m not, those other folks can hardly imagine the treat they have in store.