(1) Chad Hanna (1940) Stable boy Henry Fonda runs away with a moth-eaten circus in 1841, in gorgeous Fox Technicolor* and with spot-on atmosphere courtesy of director Henry King. There’s also a pretty amazing scene of 16-year-old Linda Darnell training to be a bareback rider; it’s one long take of her horse cantering round and round the tiny circus ring, with Darnell bouncing in her training harness scrambling to hold on and her trainer barking instructions. The shot goes on for what seems like five minutes without a cut, and you can’t take your eyes off the screen; the plot goes nowhere during that time, but we learn a lot about 19th century circus life and the grit and determination of Darnell’s character. (And incidentally, we learn something about Darnell’s own grit — she was allergic to horses.) 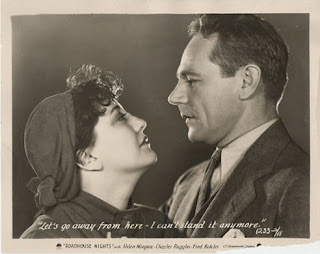 (2) Roadhouse Nights (1930) Here’s another one of those synchronicity moments: this is one of the movies Richard Barrios talks about in A Song in the Dark, with Helen Morgan as a saloon singer embroiled in her gangster boyfriend’s crimes. Not a musical exactly, but with plenty of music — including several songs from Morgan (in her prime, before the booze really laid her low) and movie newcomer Jimmy Durante (it’s also Durante’s only movie appearance with his vaudeville partners Lou Clayton and Eddie Jackson).

Plus an honorable mention for Woman on the Run (1950), a tight little noirish thriller set in San Francisco with Ann Sheridan as the estranged wife of a man on the run from the killer whose crime he witnessed. This one joins a select list of movies (Vertigo, The Lineup, Experiment in Terror) that give us a visual record of what San Francisco looked like before becoming crusted over with skyscrapers. (The amusement park climax isn’t San Francisco, however; it’s Carmel.)

*And speaking of Technicolor, here’s a good rule of thumb: If you want to see Golden Age Technicolor at its best, for the 1930s look to Selznick International (A Star Is Born, Nothing Sacred, Gone With the Wind); for the ’40s, 20th Century Fox (Hello, Frisco, Hello; Wilson; The Black Swan); and for the ’50s, Paramount (Shane, The War of the Worlds, White Christmas).