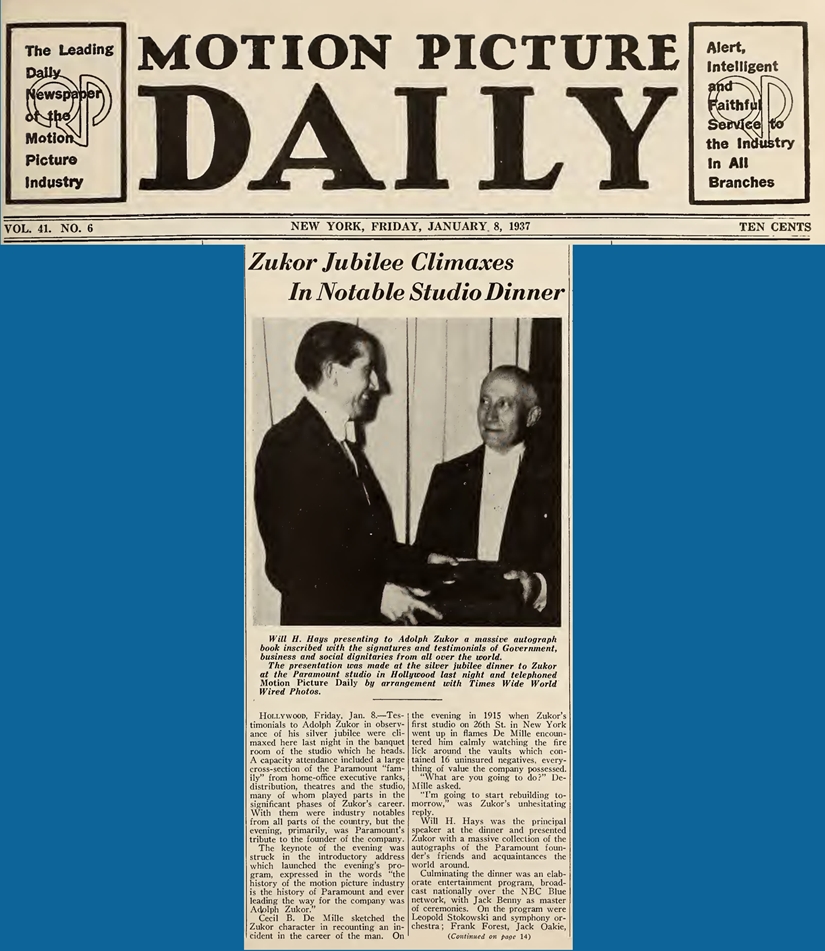 My friend Blair Leatherwood — he of the genealogical research and the access to newspaper archives — has been unable to let go of the mystery of the jigsaw-puzzle list of autographs I posted about on September 14. And I’m glad of it, because he has come across an excellent candidate for the occasion that prompted the creation of that curious artifact — what historian Richard M. Roberts pegged as “a Paramount event” and “an interesting bunch of autographs.”

On Thursday, January 7, 1937 — Adolph Zukor’s 64th birthday — Paramount Pictures threw him a huge party commemorating his 25 years in the movie business, an industry he had done much to create. The evening began in the studio’s commissary, lavishly converted into a banquet hall, where some 400 guests, led by toastmaster Will H. Hays of the Motion Picture Producers and Distributors of America (MPPDA), paid tribute to the pioneer mogul. After dinner, the party adjourned to the studio’s “huge assembly stage”, which had been elaborately decorated to accommodate “several hundred additional guests”, for an entertainment program and dance broadcast coast-to-coast over NBC’s Blue Network (which later became ABC). The emcee for the broadcast was Jack Benny, with introductory remarks by Cecil B. De Mille. Also on the program were Leopold Stokowski and “his orchestra” (presumably the Philadelphia Orchestra), operatic tenor Frank Forest, and an orchestra of 100 and chorus of 50 under the baton of Boris Morros, Paramount’s musical director. Also parading past the Blue Network mike were such Paramount stars as Jack Oakie, Carole Lombard, W.C. Fields and Dorothy Lamour, along with stars from other studios who had worked for Zukor at one time or another. What musical selections Stokowski and Morros and their orchestras performed, and how long the broadcast lasted, were not recorded in coverage of the evening’s festivities. 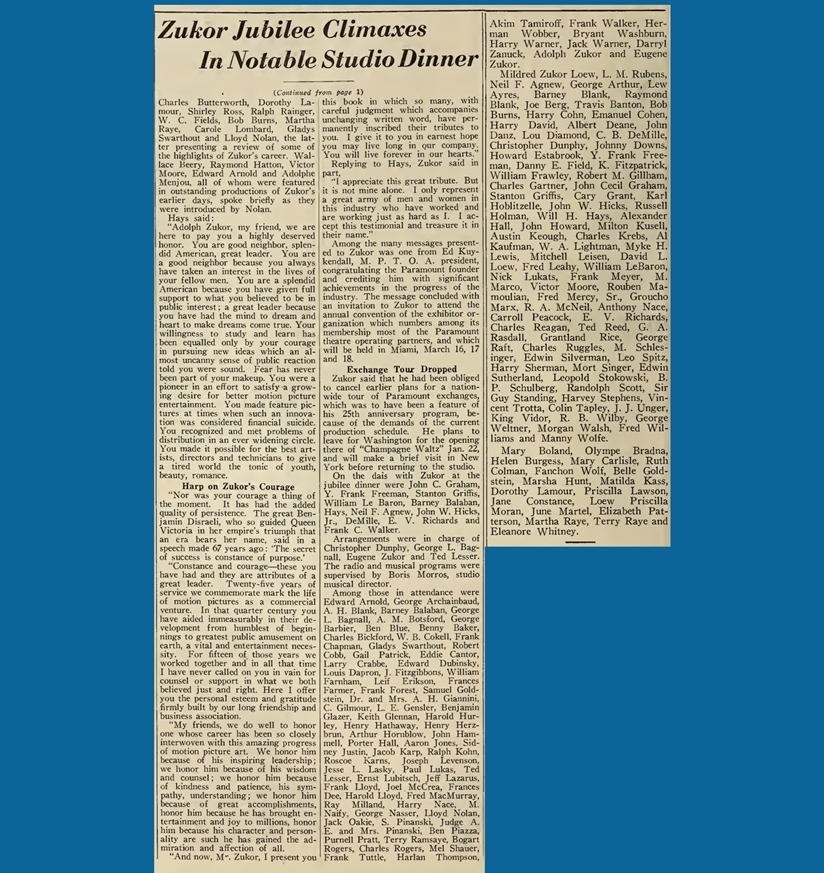 Blair shared with me an article on this shindig from the next day’s issue of Film Daily — an article written by none other than Ralph Wilk, one of the unfamiliar names on the jigsaw puzzle that Blair was able to identify for me. What I’ve reproduced here is from the same day but a different paper, Motion Picture Daily (I do have a few archival resources of my own). This article has a little more information about the evening than the Film Daily article did, including what looks like a more extensive list of those in attendance. Even this list, however, doesn’t have anywhere near the 400 names said to have been at the banquet, to say nothing of the several hundred more (Variety called it a full thousand) at the after-dinner broadcast and dance.

There are several good reasons to think this Zukor Jubilee was the occasion for that jigsaw puzzle of autographs in my dealer acquaintance’s collection. For starters, the timing is right: January 7, 1937 is comfortably within the August 1936-September 1939 window we can deduce from the parchment itself. And of course, it was indeed a Paramount event, as Richard Roberts surmised it must have been. The odds that another such event would happen at Paramount during that same period strike me as vanishingly small.

There is a significant — though by no means total — overlap in the names on the jigsaw and those in this list published in Motion Picture Daily (taken, no doubt, from a Paramount press release of the invite list). Given further study, a comparison of the two may even shed light on some of the harder-to-read signatures. It has already confirmed one name that I thought for sure I must have misread: In the northeast corner of the jigsaw, third name from the top, is Bogart Rogers. Thinking a Hollywood Bogart could surely refer to only one person, I figured that couldn’t be right — but no, Bogart Rogers was indeed a producer/writer at Fox, Paramount and MGM from 1931 to 1943. He was also the son of famed criminal lawyer Earl Rogers (the model for Perry Mason) and the younger brother of Adela Rogers St. Johns, one of the most colorful female reporters of the 20th century.

For me, the clincher is this: At the banquet Will Hays presented Zukor with a massive book containing “testimonial autographs from persons high in governmental, civic, social and film circles in almost every country on earth,” (Variety, January 13, ’37). Surely the book itself hadn’t circulated all over the world to collect these encomia. Most likely, loose-leaf pages had gone out to all of Paramount’s overseas offices, with orders to get everybody who was anybody in their respective territories to sign it — or else. Then back in California the pages were bound into the book Hays is proudly handing off to Zukor in the photo here. (Side thought: Do you suppose Josef Goebbels, or even Hitler himself, signed that book? They both loved movies. Then again, maybe not; Zukor was Jewish, you know.)

So…was the jigsaw puzzle parchment one of the pages from that book? I don’t think so. Here’s my theory: At the banquet, and at the dance afterward, pages similar to those dispatched overseas were set up on tables at the back of the hall for guests to sign, with the aim of later incorporating them into Zukor’s souvenir album. If so, exactly how many pages there were (we can assume there were at least twenty), whether they ever made it into Zukor’s book, and especially, how this one page made its way into the hands of my collector acquaintance — all that is among the mysteries that remain.

It would be fun to have a look at that autograph album. Does it exist, and if so, where? According to Variety, in accepting the book, “Zukor declined it as a personal memento, accepting it in the name of all his Paramount associates.” This suggests that the book wound up in the studio’s files. Is it stashed somewhere now, like the crate at the end of Paramount’s own Raiders of the Lost Ark, among the studio records that made their way to the UCLA Film & Television Archive or the Margaret Herrick Library at the Academy? If anybody reading this has any light to shed, I hope they’ll get in touch. 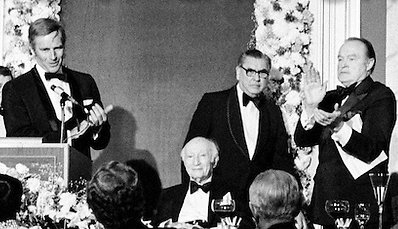 If Blair’s and my speculation is correct, then that jigsaw parchment was indeed akin to the sheet of autographs in the souvenir program for 20th Century Pictures’ The House of Rothschild: a literal birthday card, for both Paramount Pictures (originally Famous Players in Famous Plays, then Famous Players-Lasky) and for Adolph Zukor personally. In delving into this gala party in 1937, I couldn’t help remembering a similar celebration Paramount threw for Zukor for his 100th birthday in January 1973 — an occasion probably nobody in 1937 imagined in their wildest dreams. The emcee on that occasion was Bob Hope, surely (like Jack Benny at the 1937 after-dinner broadcast) a more congenial host than Will Hays. By then, naturally, Zukor’s position at Paramount was purely honorary and ceremonial, but he still reported every day to his studio office as Chairman Emeritus. I remember something Hope said in his tribute from the podium: “Adolph Zukor knew personally some of the people Charlton Heston is playing now.” Zukor died, still in emeritus harness, at 103 in 1976.

I am indebted to Blair Leatherwood for uncovering and following this lead. I don’t know precisely what pointed him in this direction, but I think he’s hit paydirt. The mystery now — assuming this much of the solution is correct — is who spirited this page away from the party, whether any others are still out there, and how this one made its way into that batch of ephemera my ex-roommate’s brother acquired some forty-odd years later.

You will find 205 posts in the category  on this blog.