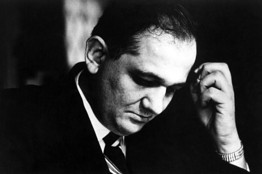 I was saddened to learn of the death of movie critic Andrew Sarris, who passed away Wednesday at the age of 83. I didn’t always concur with his judgments, but that sort of thing is overrated. What makes a critic valuable isn’t how often you agree with him (or her), but how clearly his passion for the art and craft of movies comes through in his writing, and whether he enriches your understanding with his own perceptions and observations. On that score, Sarris was one of the best.

Sarris’s great adversary Pauline Kael, in her 1963 essay “Circles and Squares”, which inaugurated her and Sarris’s longstanding feud, wrote: “The role of the critic is to help people see what is in the work, what is in it that shouldn’t be, what is not in it that could be. He is a good critic if he helps people understand more about the work than they could see for themselves; he is a great critic, if by his understanding and feeling for the work, by his passion, he can excite people so that they want to experience more of the art that is there, waiting to be seized. He is not necessarily a bad critic if he makes errors in judgment. (Infallible taste is inconceivable; what could it be measured against?) He is a bad critic if he does not awaken the curiosity, enlarge the interests and understanding of his audience. The art of the critic is to transmit his knowledge of and enthusiasm for art to others.” By this measure, both Kael and Sarris, whatever their differences, were great critics. (About their feud, Sarris once graciously said, “We made each other. We established a dialectic.” I seem to recall that Kael once expressed similar sentiments about him, but I’ve been unable to confirm this.) (UPDATE: Oh wait, I can too: Kael biographer Brian Kellow tells us that she was “often quick to point out that she thought Sarris had a lively intelligence”.)

Kael and Sarris had another thing in common: They both came of age and found their voices at a time when movies were an explosively vibrant art. I’ve been reviewing movies off and on since 1967, and steadily since 1989. When people ask me what is the greatest change I’ve seen in that time, I tell them: It’s harder now. In the 1960s and ’70s, even the bad movies were worth writing about; nowadays, even the good movies, there’s just not all that much to say about them. Andrew Sarris, like Kael, was one of a dwindling corps who wrote often and well at a time when there was one helluva lot to be said.

Pauline Kael died in 2001. By that time, we’d already lost Otis Ferguson, Graham Greene, James Agee, Dwight Macdonald, Penelope Gilliatt, Vincent Canby — the list goes on. Sarris’s death deprives us of yet another critical voice that arose amid the ferment of those heady days, and one that uniquely championed the vigor and vitality of American movies against the “higher” forms of Cinemah coming from other countries.