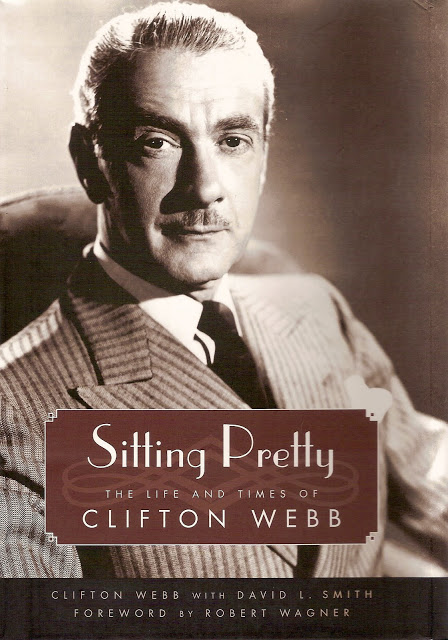 Clifton Webb is unique among movie stars. There are other (albeit lesser) tough guys than Humphrey Bogart; other blonde sex symbols than Marilyn Monroe; other western heroes than John Wayne; other Latin lovers than Rudolph Valentino. But there was nobody like Clifton Webb before his belated screen debut at 54 in Laura, and there has been nobody like him since.
Actually, strictly speaking, Laura wasn’t his debut. He appeared in a thin smattering of silents and a single 1930 talking short immortalizing a stage sketch he’d performed with Fred Allen. There was also an 18-month period in 1935-36 when he was under contract to MGM (Metro had vague ideas of making him their answer to Fred Astaire), but nothing ever came of that. For all intents and purposes, Laura was the beginning of Clifton Webb As We Know Him. For many movie buffs today, I suspect their knowledge of Webb begins and ends with that 1944 noir classic. Or it may extend to the other two pictures for which he got Academy Award nominations, The Razor’s Edge (’46) and Sitting Pretty (’48).
That last title, in fact, is the one my friend Dave Smith has chosen for his book on Clifton Webb: Sitting Pretty: The Life and Times of Clifton Webb. Amazingly, it’s the first full-length biography of Webb; even more amazing is the fact that it was written at least in part by Clifton Webb himself. He had started writing his autobiography and made it through six chapters before putting the project aside. (Webb’s proposed title was Mabelle and Me — Mabelle being his mother; like Cornell Woolrich, Webb lived with his mother for her entire life and didn’t survive her by much. The resemblance between the two men, however, most emphatically ends there.)
Dave Smith has retrieved Webb’s manuscript from (and with the kind permission of) the collectors who came into possession of Webb’s papers and memorabilia after his death in 1966. In addition to those six chapters, there were extensive — though often undated — notes for the remainder of the autobiography, and Dave makes use of them, and his own tireless research, in picking up Webb’s story where he left it at the Broadway opening of the musical Dancing Around in 1914. 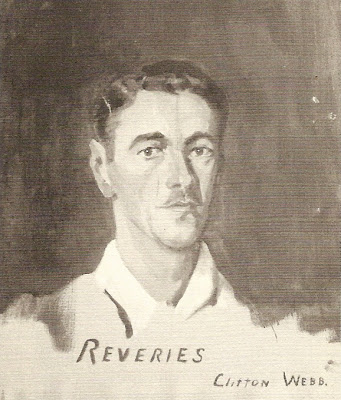 Nineteen-fourteen!?! Yes, Clifton Webb’s autobiography cuts off a full 30 years before where most of us think his career even began. In fact, the movies from Laura to Satan Never Sleeps (’62) were his second career, the first having lasted on stage throughout the ‘teens, ’20s and ’30s. It was sometime during these years that he painted the self-portrait here (the date is unknown, but my guess is it’s from sometime in the mid-1920s). Webb was a super-elegant song-and-dance man, famous and sought-after for his ballroom skills and, later, his musical comedy abilities (among the songs he introduced on Broadway were “I’ve Got a Crush on You”, “At Long Last Love”, “I Guess I’ll Have to Change My Plans” and “Easter Parade”).

It’s almost startling to read Webb’s chapters on his early days in New York after his mother married (her second time) into the high society of the turn of the 20th century. Startling to realize that he spent his childhood and adolescence in the Manhattan of Edith Wharton and Diamond Jim Brady (“…completely settled only as far north as 72nd Street”), rose to his first fame on the Broadway of Jerome Kern and Charles Frohman, and went on to make his last stage appearance just off the gaudy Times Square of Damon Runyon (by which time, snob that he was, he found New York much diminished by the changing years).

For me, these early chapters are particularly fun reading because they are in Webb’s own voice, and we can hear him speaking them. Webb was a shameless name-dropper, and reading his roll call of the famous people he rubbed elbows with in the 1910s and ’20s is heady stuff. Better still, his writing gives a bracing whiff of what everyone who knew him says: that he was a wonderful conversationalist. (A favorite passage of mine is Webb talking about his mother’s pregnancy, almost as if he remembered it: “Mabelle has always sworn that the first sign of life I evidenced was a good hard kick when she was in the act of applauding the eminent Francis Wilson, and she floated home convinced that she was to be the mother of a great actor. Nobody to this day, I confide with a grave sense of responsibility, has disabused her of the notion.”) 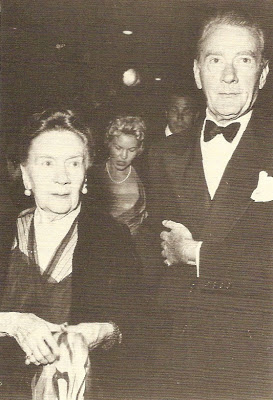 That kicking baby was born Webb Parmelee Hollenbeck in Indianapolis in 1889. As a child actor young Webb used his stepfather’s name and was billed as Webb Raum. When Mabelle sent the elder Raum packing (not a minute too soon, by Webb’s lights), her son cast about for another stage name. He liked Webb well enough, and decided “Clifton” had the right ring of patrician dignity. Mother became Mabelle Webb and called her son “Webb” to the end of her life — naturally enough, since it was in fact his first name. He always called her Mabelle, and eventually they would be known as the happiest couple in Hollywood. Myrna Loy always said Mabelle “looked like Clifton in drag”, and this picture proves Myrna wasn’t exaggerating.
There’s a story — a legend, maybe — that when Otto Preminger (having taken over the direction of Laura from Rouben Mamoulian) wanted Webb for the vicious Waldo Lydecker, he was told, “You can’t cast Webb — he flies!” Meaning to say, he’s a flaming queen, too flagrantly swishy ever to pass for any kind of heterosexual. Whoever said that, if anybody really did, underestimated Webb. As he said himself, “I have destroyed the formula completely. I’m not young. I don’t get the girl in the end and I don’t swallow her tonsils, but I have become a national figure.”
Clearly, Clifton Webb didn’t believe in false modesty (or any other kind), but he had a point. By the time he said that, he had become a national figure. Webb’s big splash in Laura might have been only a fluke if it hadn’t been for one thing: Darryl Zanuck liked him and sensed a unique screen persona that, with proper care, could be developed into a valuable property for 20th Century Fox. Webb’s next picture was The Dark Corner for Henry Hathaway, playing a coldly calculating art dealer not far removed from Laura‘s Waldo. Then came The Razor’s Edge and another Oscar nomination as Somerset Maugham’s snobbish expatriate Elliott Templeton. 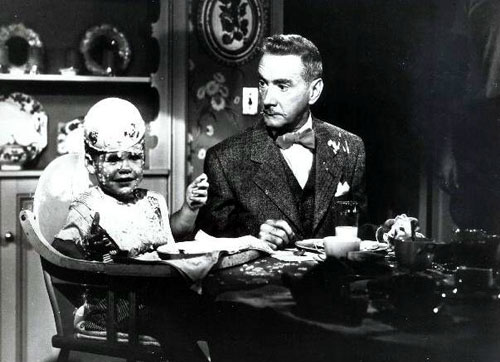 Those first three pictures made Clifton Webb’s reputation as a character actor, but it was Sitting Pretty that made him a star (and got him his third Oscar nomination) playing Lynn Belvedere, a prissy intellectual novelist who takes a position as live-in babysitter for parents Robert Young and Maureen O’Hara. Critics and film noir historians have glommed onto the scene in Laura where Webb talks to detective Dana Andrews from a bathtub, but in Webb’s own lifetime this was probably the most famous scene in his career, where he dumps a bowl of oatmeal over the head of a misbehaving baby. (In real life the kid, 18-month-old Roddy McCaskill, was delighted at all the mess, and having a high old time; they had to dub the sound of crying in post-production.)
My own favorite Clifton Webb moment comes just before this. First the set-up: The Kings (Young and O’Hara) think they’ve hired a college co-ed to sit their kids while they both take jobs to make ends meet — after all, “her” name is Lynn Belvedere. Instead, they get this humorless middle-aged bachelor with his nose in the air. This first morning at the breakfast table it begins to dawn on them that he’s liable to be as much a handful as their own brood. Webb has a long speech in which he explains to Mr. and Mrs. King the terms on which he will agree to work for them; I can’t remember exactly what-all he says but it goes on for quite a while, telling them what hours he will work, what evenings he demands off, when he expects breakfast, lunch and dinner, how long his eggs must be cooked, and so on and on. In the finished picture, precisely as Mr. Belvedere concludes his long-winded ultimatum, little Roddy McCaskill sneezes. Without batting an eye, Webb glances at the toddler and barks, “Gezundheit!” It’s obviously unscripted — there’s no way to get an 18-month-old to sneeze on cue — but perfectly in character all around, and Webb’s “gezundheit” deftly snatches our attention back from the adorable tot and turns that sneeze into an exclamation point to Webb’s own speech. It’s a hilarious moment and an example of Clifton Webb’s amazing presence of mind. (Kudos too to Robert Young and Maureen O’Hara for keeping straight faces and not spoiling the take.) 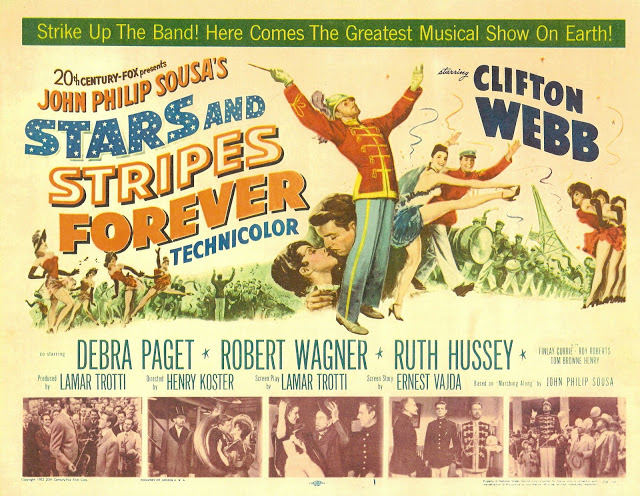 After Sitting Pretty — and two more Belvedere sequels — Clifton Webb was a major box-office star, and he remained so for much of the rest of his career. If movies like Cheaper by the Dozen and Stars and Stripes Forever (a largely fictitious biopic in which Webb was nevertheless ideally cast as John Philip Sousa) are less highly regarded today than Laura or The Razor’s Edge — well, that’s only natural, I suppose, and probably correct. But they don’t deserve to be forgotten altogether. Webb had a marvelous flair for comedy — and not just the bitch-wit of Waldo Lydecker or Elliott Templeton — and movies like these are worth seeing for it. So is the all-but-forgotten Dreamboat (’52), in which Webb plays a staid college professor mortified when the new medium of television unexpectedly resurrects his previous career as a silent movie heartthrob.
Sitting Pretty (that is, Dave Smith’s book) grows unavoidably cheerless in its closing pages as it recounts Webb’s utter failure to cope with the death of his mother (in 1961, at the age of 91). He was disconsolate and maudlin at what was after all the natural order of things — people are supposed to bury their parents — and his incessant grief, not only for Mabelle but for other friends and intimates already gone, sorely tested the patience of those who were still around (Noel Coward snapped, “It must be hard to be orphaned at seventy-one.”). Well, that’s part of the story too, if not the best part. For most of his life Clifton Webb was great fun to be around. His movies remind us of that, and so does Sitting Pretty: The Life and Times of Clifton Webb; it brings the man back in his own words, and we can once again bask in the pleasure of his company.